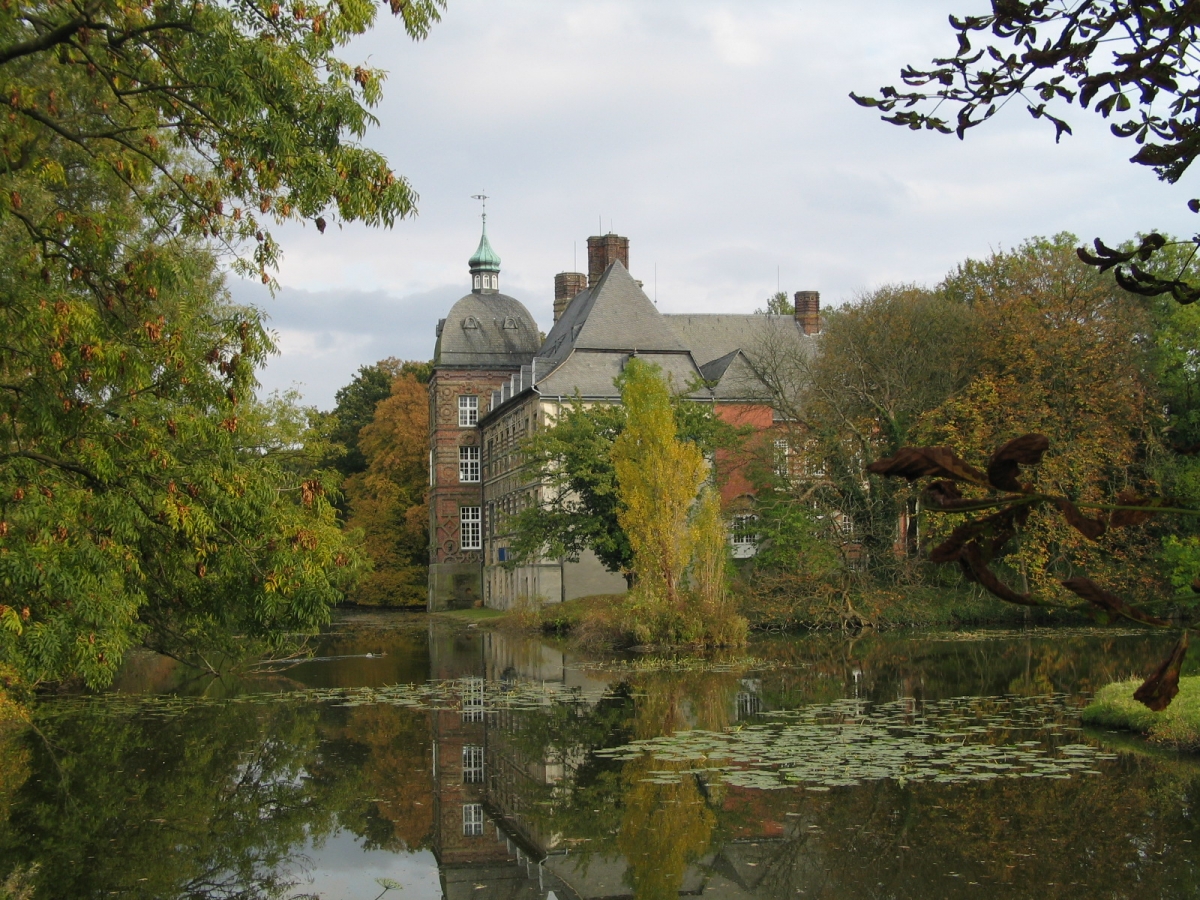 Schloss Hovestadt (Hovestadt Castle) is located at a horseshoe bend of the river Lippe in the southern Münsterland. The Renaissance castle can be traced back to the 13th century and is today the seat of the Counts of Plettenberg.

The grounds were restored in the 1990s on the basis of an historical plan from the 18th century. They are an example of a typical, late-Baroque garden of the landed Westphalian aristocracy.

At the time of their creation, these gardens had no particular representative function. They were, rather, reserved for the pleasure and diversion of their owners.

The most impressive aspect of the gardens at Schloss Hovestadt is the way the hedges and trees are planted to form spaces. The best time to visit the park is therefore between spring and autumn, from the time when the trees come into leaf to when they shed their leaves.

Schloss Hovestadt (Hovestadt Castle) is located at a horseshoe bend of the river Lippe in the southern Münsterland. The castle, which was probably originally planned with four wings, stands on an island in the middle of a large lake.

The approach to the forecastle passes through two gate lodges flanked by four single-storey domestic buildings. After the von Plettenberg family took over the castle, these buildings and the forecastle were extended on the basis of plans by Johann Conrad Schlaun, the well-known Baroque architect, and the castle chapel and an orangery were integrated into the long buildings. The driveway from the castle to the lodges runs from north to south and is lined by chestnut trees. It is crossed in the middle by an east-west axis.

To the east of the forecastle are the gardens of the castle, which are surrounded by a moat. These gardens were created around 1733 along with the construction of the new area for domestic use. A “situational plan with gardens” dating from the 18th century is the only historical source for the gardens and shows them to be laid out geometrically in typical French style.

At the end of the 18th century, plans existed to enlarge the castle gardens to include areas featuring early landscape gardening. However, these plans never came to fruition. Clemens August von Vagedes, the royal architect and master builder of the district of Schaumburg-Lippe, had planned numerous gardens around the castle as careful additions to the existing late-Baroque gardens. Vagedes died at the age of thirty-five, however, shortly before the start of the project, and his plans were never realised.

The gardens’ zenith and period of intensive use and care were now over. The grounds became increasingly overgrown and the park sank into a fairy-tale like slumber.

It was not until the 1990s that first efforts were made to revive the castle gardens. Although there were no detailed plans from the time of the gardens’ creation, the general plan from the 18th century indicated that no alterations had taken place regarding their basic structures or the way they had been planted. It was thus possible to recreate the original state of the gardens in many areas as part of a restoration programme from 1994 to 1997. It was, however, decided to retain those trees which had been planted extensively in the 19th century and whose growth had resulted in new structures rather than sacrificing them to purist Baroque remodelling. The gardens at Schloss Hovestadt have been open to the public since 1997.

Today’s visitors thus get an interesting impression of a typical, late-Baroque garden of the landed Westphalian aristocracy. At the time of their creation, these gardens had no particular representative function. They were, rather, reserved for the pleasure and diversion of their owners.

The extensive moat system surrounds the castle and divides the park into individual, clearly-defined sections:

The former kitchen garden, which is enclosed by high hedges for shelter from the wind, is now used as a pasture and for the cultivation of conifers. Openings in the hedges halfway along the middle axis still enable the visitor to get a view of the north-south axis today.

The kitchen garden is adjoined to the east by the “Sternbusch”, which consists of eight paths lined by high hedges running outwards from a central space. While the diagonal axes are of lesser importance, the north-south axis leads to the boscage and hedge theatre at the end.

The southern area of this part of the garden features a round tree room – a circle formed by six immense and very tall linden trees. A double row of hornbeam hedges forms the hedge theatre. These hornbeams had lost their shape completely during the time when the garden was overgrown but are now carefully tended. There is a “stage” at the back of the half-moon hedge room complete with side passages and a dimensional backdrop formed by the hedges.

A white wooden bridge leads to the garden island to the east of the castle. This almost square area completely surrounded by water creates a wood-like scene. A system of paths along the boundaries enables the visitor to walk around this part of the garden and to see charming views of the castle and surrounding landscape. Small areas for sitting have been cleared at the northwest and southwest corners of the island. The observant visitor will notice a large, sunken area in the centre of the island. It is impossible to say today whether this area was once a pond or perhaps even a bowling green (boulingrin).

The garden on the castle island is now the private garden of the count and family and is not open to the public.

The most impressive aspect of the gardens at Schloss Hovestadt is the way the hedges and trees are planted to form spaces. The best time to visit the park is therefore between spring and autumn, from the time when the trees come into leaf to when they shed their leaves. 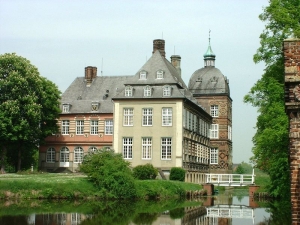 Opening times:
The castle ground can be visited. Castle island and castle closed for the public.
The Baroque Garden can only be visited by guided tours.

Events for children and young people: No