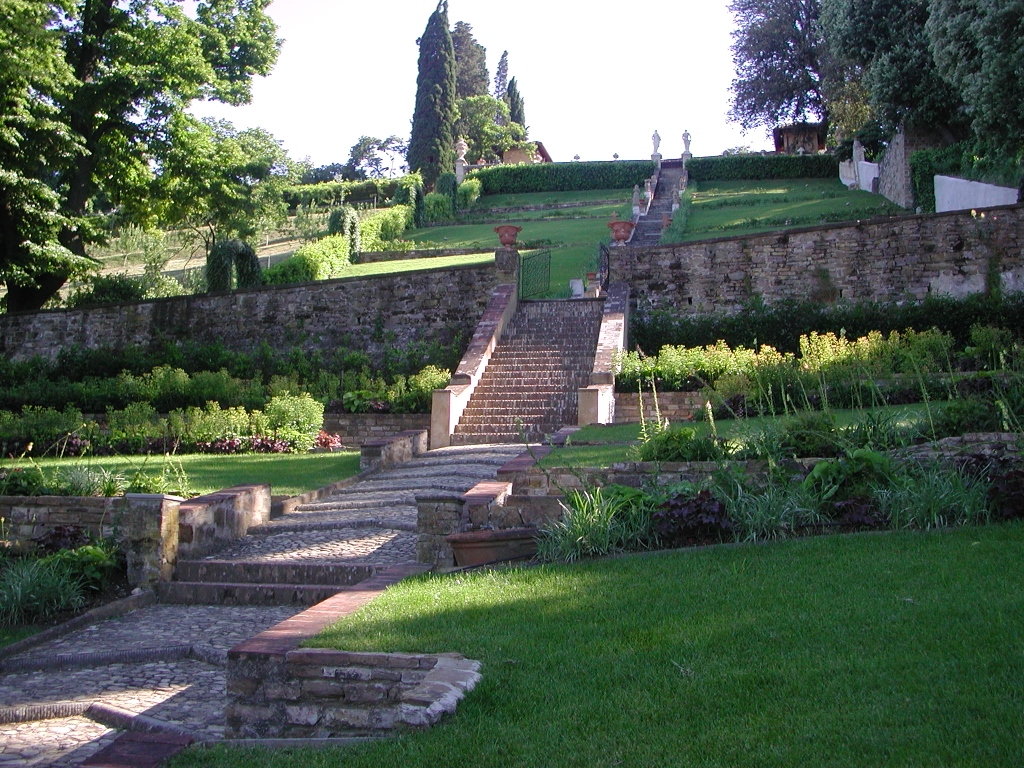 The Bardini Garden is a unique place where to admire Florence, the urban landscape, the monuments and the surroundings hills. The visit of Bardini garden is a tour through art and nature, crossing seven century of Florentine history till the present.

The Bardini Garden occupies with its four hectares most of the hill that rises from the Arno river and Ponte Vecchio to the gate of San Giorgio and Forte Belvedere. The area is steep and is contained within the medieval walls of Florence.

The Bardini garden is also a very special case as the historic garden is divided in three different gardens: the rural part on the east side, the baroque stairway the central part, and the English wood on the west side.

The visit of the Bardini garden is very varied and rich from a botanical and historical point of view. The rural part offers to the visitor a rich collection of fruit trees, Noisette roses, hydrangeas and wisteria. The baroque staircases is decorated with statues, fountains and grottoes : at the bottom a contemporary flower garden is blooming during the seasons, and in the upper part iris and Bourbon roses are planted along the stairway and around the Belvedere terrace.

The English garden is woodland with evergreen trees and many fountains. In the central part there is a lawn with a long canal, very rare in Florence historic gardens. The villa has two beautiful terraces from which it is possible to admire Florence to the east and the best sunset to the west.

The Bardini Garden is constituted by three gardens different in era and style. In the centre is the grand staircase built in the seventeenth century and enriched with statues and fountains at the end of the eighteenth century by Giulio Mozzi. To the west, the Anglo-Chinese garden with groves and canals, built by Jacques Louis Le Blanc at the beginning of the nineteenth century, surrounds the seventeenth-century Villa Manadora. In the agricultural park to the east, visitors can enjoy the orchard with varieties of fruits in the Tuscan farming tradition and different ways of raising plants on trellises, cordons etc.

Furthermore, the collections of plants that have been created during the restoration carried out between 2000 and 2007, makes the garden unique in Florence.

We can imagine the visit of Bardini Garden starting from the lower entrance, which is from via dei Bardi N° 1 red. We follow the carriageway uphill to the large mosaic backdrop with the Mozzi crest in relief (late 18th century) where the paths split. To the right the avenue narrows and continues uphill into the English wood while the main avenue continues on more level ground. This carriageway was laid by Stefano Bardini by modifying the three walled orchards that closed off Palazzo Mozzi on the hill side. To make way for the carriageway, Stefano Bardini demolished the walls and built new ones which he then decorated with various pieces from his collection.

From here, following the boulevard on the right, we come to a terrace and a stairway decorated with busts in pietra spugna and stucco (which were part of the baroque décor of the garden) takes us further down to the terrace that overlooks Palazzo Mozzi. Along the banister of the last flight of steps there are two statues in stone, perhaps of Vertumnus and Pomona, the patron saints of orchards and gardens. There are two dogs and two terracotta pots on the terrace, and on the left of the stair descending there is the little rustic grotto, (datable to the late eighteenth century) which contains an extremely beautiful restored stucco decoration simulating layers of stone with vegetation sprouting from it.

Then we cross the pergola of roses which gives splendid views over the city. we can reach the flower garden which  mirrors the grandiose architecture of the upper part of the stairway but is much less steep; it is has three itineraries which end in the three mosaic backdrops with stone-shell fountains enhanced by mixed herbaceous and graminaceous borders which bloom alternately in Spring and Summer.

Continuing uphill a large orchard opens on the left side. In replanting the whole agricultural part of the Bardini garden, only the pink-blossom hawthorn beside the wisteria pergola and the big cherry blossom tree towards the foot of the orchard were left where they were. But a collection of ancient fruit trees typical of Tuscan gardens together with four examples of fruit tree cultivation were introduced: espaliered, cordoned, “free range” and dwarf. Indeed a orchard of dwarf fruit-trees was planted near the niche of the caryatids. So, here, there are the ‘Francesca’, ‘Annurca’, ‘Diacciola’, ‘Mela rosa’ and ‘Zucchina’ apples that bear fruit in winter and the  ‘very early red’ that bears fruit in early Summer and the ‘Bella di giugno’, ‘Madernassa’, ‘Campana’ and ‘Butirro hardy’ pears that bear fruit from Summer to Winter, as well as other varieties of plums and peaches.

Continuing along the avenue we come at the entrance of the Wisteria pergola admiring the view over Florence and the scenographic stairway as well as the Hydrangeas collection. During the restoration of the garden, the aim was to revive botanical interest by creating the nuclei of collections to build a series of theme gardens both of the Tuscan tradition and also for being a botanical and ornamental point of reference., Hydrangeas where cultivated in Florence romantic gardens.

We then arrive in the large Belvedere terrace which gives the broadest vista over the city: the two statues (from the Veneto region) and the urns and the baskets of fruit are arranged on the balustrade of the Bardini terrace with the clear intent of creating effect. The Belvedere loggia was also a creation of Stefano Bardini’s; by enlarging the two small Kaffeehaus buildings in the eighteenth century and linking them using sandstone pillars from Pistoia, he created a grandiose finale to the scenography of the stairway.

The rustic grotto on the western end of the Belvedere is part of the English garden and was created in the early nineteenth century when the west part of the garden belonged to Luigi Le Blanc.

Behind the Belvedere Loggia there is a Camellia collection with 30 varieties of old Camellias, suc as Generale Coletti, Sacco Vera, Oscar Borrini, Lavinia Maggi. The Camellias have been planted along the medieval stone wall of Florence.

From the Belvedere terrace, we enter the English wood after passing by the bed of azaleas with the dragon channel, another part of Luigi Le Blanc’s early nineteenth century Anglo-Chinese garden.  The dragon channel – restored after archaeological excavations – is bordered by ferns, Helleborus, Liriopus, and other shade-loving plants. The azaleas were recently purchased with the intent of rebuilding the collection that was the boast of the garden in the 1960s. The large lawn is dominated by the sculpture of Ceres and Bacchus from Liguria placed there by Stefano Bardini.

From the bed of azaleas we go uphill to restored lemon-house and continue along the meandering avenues of the upper English wood with its beautiful views over the city then down to the villa where a large terrace opens towards the west and another view over the city. From here, we can continue downhill towards the villa, pause on the large lawn with the sixteenth century fountain of Venus. 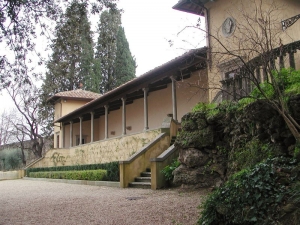 Exhibitions and other events: See:www.bardinipeyron.it