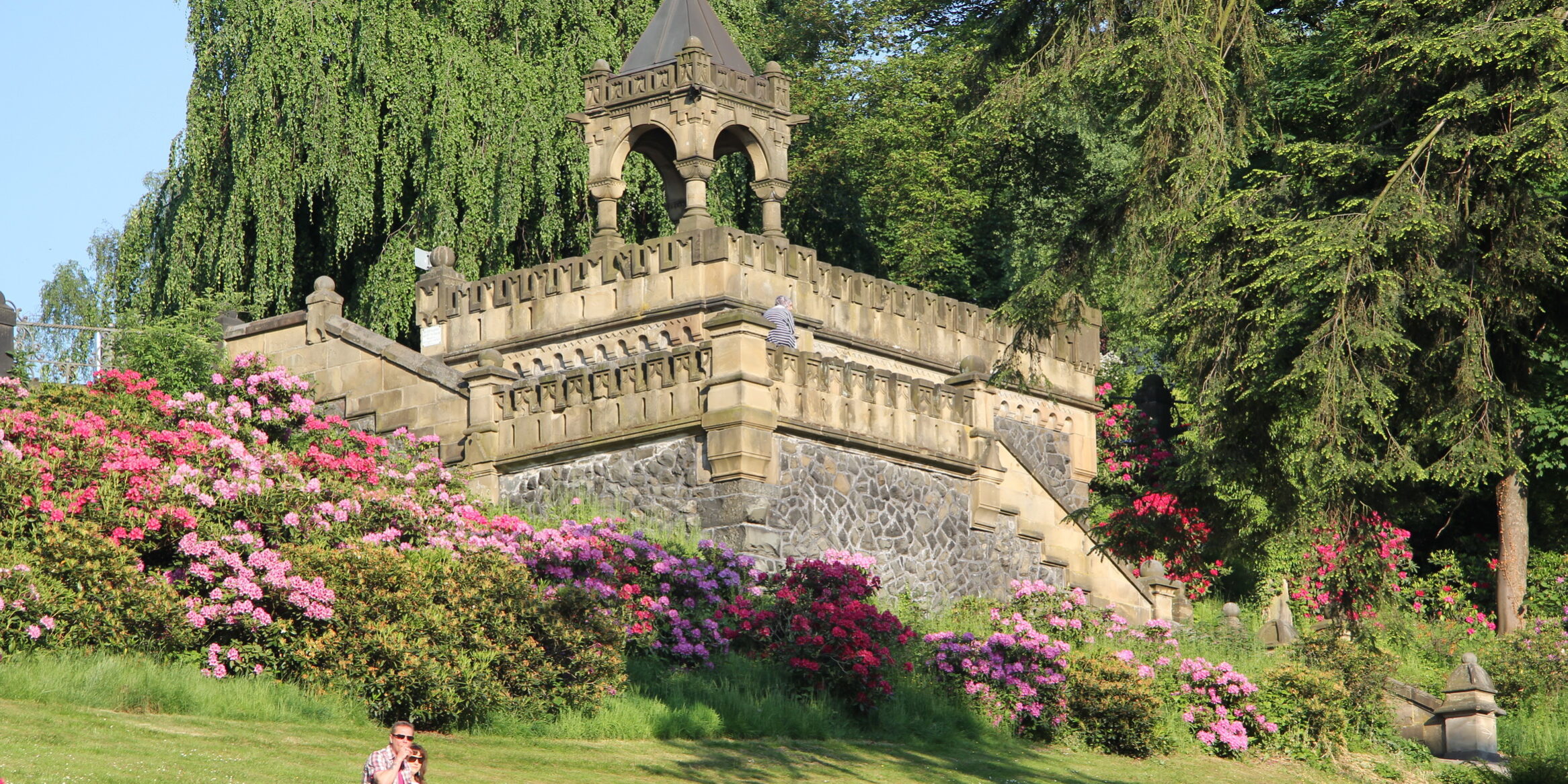 The Barmer Verschönerungsverein (“Barmen Enhancement Association”), which was founded in 1864, was the initiator of the Barmen Parklands and remains responsible for them today. Located on the slope of the southern Barmen hills, the Parklands are regarded as the second largest citizens’ park in Germany and consist of the Upper and Lower Parks, the Ringeltal, Fischertal, Barmen woods and the “cemetery of honour”.

The open sweep of the extensive lawns alternates with solitary trees, groups of trees and shrubs as well as both small and large ponds, making the Barmen Parklands an outstanding example of the ideal of an English landscape park. Several vantage points offer impressive views over the town. Important personages who dedicated themselves to the aims of the “Enhancement Association” and other causes are commemorated by monuments.

The Barmen Parklands were open to all citizens from the outset and today it is still easy to imagine the impact they must have had, especially on the workers who lived in the narrowly-built parts of the town which suffered from industrial noise pollution and emissions. The appeal of this “green lung” continues to be so great that the Parklands are still a popular destination for outings today, and are also used and highly valued by local residents.

The historically structured Barmen Parklands form a significant part of Wuppertal’s history and that of its parks. They owe their creation to the “Barmen Enhancement Association”, a private citizens’ initiative which has existed since 1864, i.e. which has acted constantly in the interests of its English-style “late landscape park” for 150 years. The Barmen Parklands are characterised by their unique topography, varied gardens, numerous old trees, ponds, interrelated vistas and views over the Wupper valley.

Covering approximately 100 hectares, today’s Barmen Parklands are still for the most part based on plans drawn up by Joseph Clemens Weyhe, the famous garden designer from Düsseldorf. But the work of his successors Oskar Hering and Oskar Stüting can also be identified. Peter Schölgen, who played an active role in the Barmen Enhancement Association for 50 years, also left his mark on their design.

An avenue of linden trees (Heinrich-Janssen-Strasse) links the centre of Barmen, which is part of Wuppertal, to the main entrance of the Barmen Parklands. The ponds which dominate the Lower Park date back to plans drawn up in 1869 by Joseph Clemens Weyhe, the Düsseldorf court garden director. The captivating scene created by the mighty weeping willow on the shore of the pond contributes greatly to the appeal of this landscape park as do the rhododendrons and azaleas, which develop their splendid show of blossoms in May at the latest.

A curved bridge leads to the gently rising ground of the Upper Park, which was added as an extension to the landscape park in 1872, once again using Weyhe’s plans. The avenue of oak trees, which was planted in 1870 and has been known as Buddeallee since 1931, forms an important axis. The red oaks had to be replaced by sessile oaks between 1995 and 1998.

The “Bergbahntrasse” viewing platform affords visitors a sweeping view into the Wupper valley, over the town of Wuppertal and also of Barmen and Hatzfeld. The terrace’s name is a reminder of the Barmer Bergbahn, the world’s first electric double-track rack railway, which operated from 1894 to 1959 and was discontinued and dismantled for economic reasons.

A park designed in late landscape garden style adjoins the Upper Park to the east: the Ringeltal (Ringel valley). Boasting sweeping meadows and a water-lily pond with rhododendrons, the sloping park charms visitors with its impressive old trees, among them exotic specimens and species with colourful foliage. A further entrance to the park is formed by the steps of the Dicke-Ibach-Treppe. An extensive view over the park can be had from the top terrace of the steps. The mighty Ringel monument in the upper Ringel valley also rewards visitors with a wonderful extra view when they have climbed up there.

From 1890 onwards, Artur Stüting designed an extension to the Barmen Parklands as a people’s park featuring stretches of grass, avenues, ponds, an alpine garden, a waterfall and areas for sport.

The Schüllerallee runs steeply up the hill to Emil-Röhrig-Platz, which in turn opens up new vistas. The landscape park changes its character as the ground rises, eventually becoming the Barmen woods. A network of paths through the Barmen woods was laid out in 1889 to supplement the more structured designs of the park gardens. Visitors can stroll as far as the Toelleturm on the paths in the woods. Thanks to its location at 330 m above sea level, the 26-metre tower offers a wonderful panoramic view which stretches as far as the Rhine on clear days.

The town of Barmen, which was still a town in its own right at the beginning of the First World War, pioneered the idea of a “heroes’ cemetery” at that time and created a “cemetery of honour”. This is a hidden area with a clearly defined architectural language of form which creates a framework for the burial plots, sculptures, dense shrubs and numerous trees.

Interested visitors delight in discovering and enjoying the changing appeal of the Barmen Parklands throughout the year. Flowers are of secondary importance, yet an explosion of nature occurs with the spring awakening of trees and shrubs, and especially of the numerous rhododendrons. And what can almost be described as an “Indian Summer” occurs in the various park areas in autumn, notably in theFischertal with its larch trees.

Monuments are another distinctive feature of the Barmen Parklands. They reflect the history of the park and town and contribute to the park’s variety and special character. Of particular note, for example, are the Dicke-Ibach flight of steps, the Ringel monument and the viewing tower named after Ludwig Ernst Toelle, which is the emblem of the southern hills.

The continuing commitment of the members of the “Barmen Enhancement Association” will ensure the future retention and maintenance of the Parklands. A comprehensive concept of park care and management based on specialist knowledge has been put in place for this purpose. 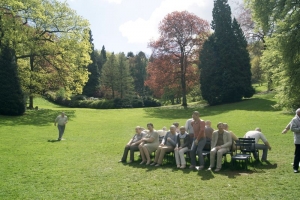 Opening times: Open all year, all day long. The tower “Toelleturm” can be visited from Easter until the end of September on Sundays and Public Holidays, weather providing.

Further Information:
Tables on the plants: no
Average visitor duration: 1-2 hours
Barrierefreier Zugang: Due to the location, many steep paths climbing from 190 to 333 m
Seats and benches: yes
Dogs: Dogs on leash are welcome.