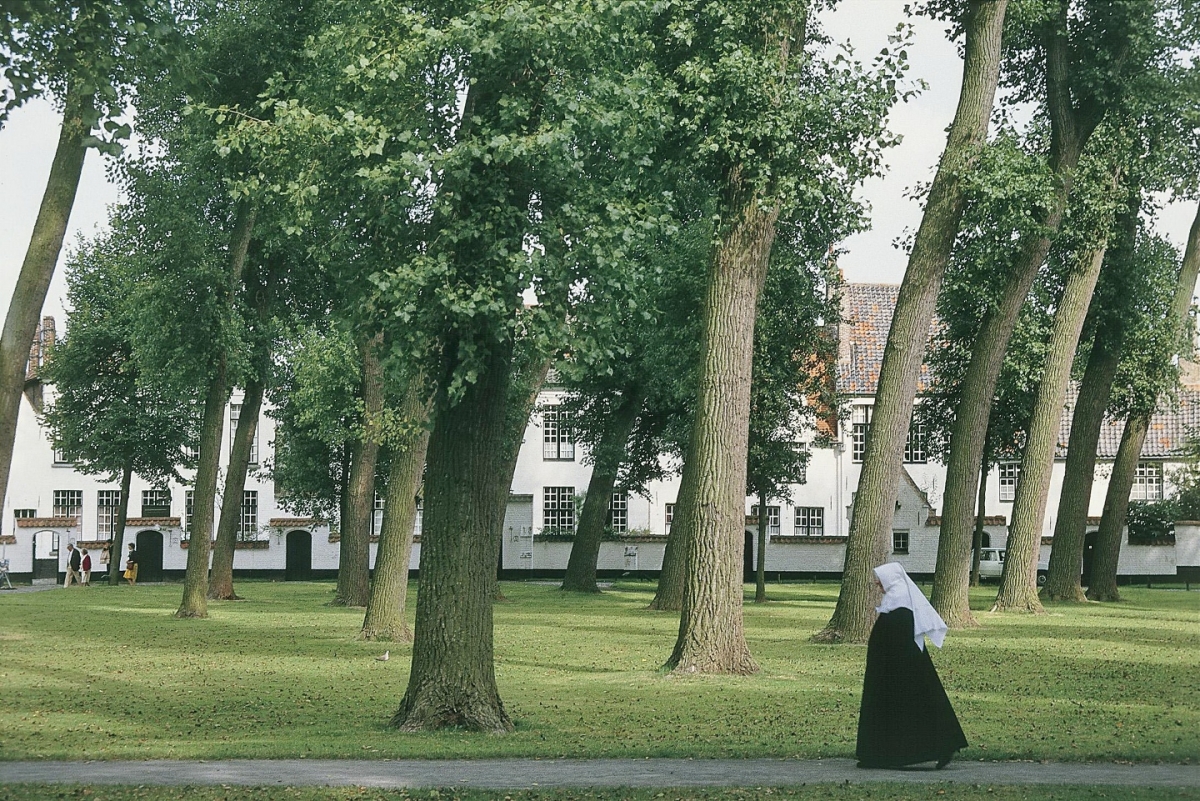 The south of the city centre of Bruges is still to a considerable extent a green oasis of peace and quiet. The beguinage and the nearby Minnewater are some of the most picturesque places in the city. Dozens of artists, amateur photographers and publishers of illustrated post cards have captured this mix of nature and architecture on canvas, film and paper.

The princely beguinage De Wijngaard still bears witness to the religious life. The large lawn is covered with hundreds of daffodils in spring. Sunlight is filtered through dozens of stately trees.

The sober inner gardens of almshouses de Meulenaere, Sint-Jozef and De Vos used to be the place where poor elderly women could dry their laundry and plant some flowers. The Minnewater is the ‘mythical’ place where water enters the city and feeds the world-famous canals of Bruges.

The Minnewater Park is located at the edge of the water. Once the garden of a stately manor, it is now a lively and green place for the residents of Bruges.

The beguinage is probably one of the most visited tourist attractions in the city centre of Bruges. It came into existence in the second quarter of the 13th century when a group of religious women settled south of the city.

The beguine movement experienced a rapid growth in Flanders as from the 13th century. Pious women formed a community which provided for its own needs. They took the vows of chastity and obedience and had to abide by internal regulations. The main difference with monasteries was that the vows of the beguines were not eternal in nature and they did not take vows of poverty. A Grand Mistress oversaw the compliance with the regulations.

The Bruges Beguinage was placed under direct royal authority in 1299 and was subsequently awarded the title of ‘Princely Beguinage’ . The number of beguines increased considerably in the course of the 15th and 16th centuries. The Bruges Beguinage witnessed a major boom in the 17th and 18th centuries, which resulted in intensive building activity: the 13th-century church was redecorated, the Grand Mistress was built a new house with a private chapel and a beautiful entrance gate was constructed. The boom was definitively over after the French Revolution and the beguinage gradually fell empty.

In 1922 the Bruges priest Rodolphe Hoornaert started looking for a new future for the unique complex and attracted a number of Benedictine nuns. These nuns still assist in the maintenance of the beguinage today. In 1998 the Bruges Beguinage as well as 12 other Flemish beguinages was inscribed on the World Heritage List.

The houses with their white-painted brick walls are grouped around a large stretch of grass. The over sixty wind-bent trees provide for soft sunlight filtering, which contributes to the intimate character of the beguinage. The lawn was originally lined with elm trees but these were replaced by Carolina poplars in 1926 after an outbreak of the Dutch elm disease. In 1980 a tree regeneration project was started in order to preserve the unique appearance of the beguinage. In spring, hundreds of daffodils form patches of yellow in the grass.

Just outside the beguinage the Minnewater can be found, the place where some major brooks flow into the city. As from the 12th century sluices were built here, which resulted in the creation of some kind of lake. A popular legend claims that a water spirit or ‘min’ used to roam around here. The Minnewater banks were used as bleaching grounds for centuries and as from the late 18th century the site even featured a faience factory.

In the early 20th century Ludovic Fraeys built a small neo-Gothic castle surrounded by a neatly laid out garden. The castle was demolished in 1969. The City of Bruges bought the 1.5ha area and transformed it into a public park. The existing paths were maintained as much as possible and bordered with linden trees. The lawns were given a colourful touch in the form of flowery borders planted with begonias, annuals and perennials. The Minnewater Park also features a rich variety of trees, including catalpas, sweet gums, horse chestnuts and silver birches. In July the Minnewater Park is filled with music when it hosts Feest in’t Park and the Cactus Festival.

Close to the beguinage and the Minnewater two almshouses can be found the simple garden of which is certainly worth a visit. As from the 14th century various wealthy citizens built small houses for the elderly, so-called ‘houses of god’. The brick houses were built around an inner garden with a chapel and a pump. These green inner gardens were really practical. The lawn was used to dry and bleach laundry. If any trees were planted in the garden at all, they were fruit trees. The garden was often also used to grow flowers to decorate the chapel. Nowadays most almshouses are still used as houses for the elderly.

Almshouses de Meulenaere and Sint-Jozef in Nieuwe Gentweg, both built in the 17th century, now constitute one of the largest and most beautiful almshouse complexes in the city centre of Bruges. Old pictures clearly show how the spacious interior garden is really used for practical purposes. The washing lines on which clothes have been hung to dry speak volumes. At present the garden is still divided in several sections, nowadays planted with sedum, hosta and geraniums. The division into sections was reinforced by planting hedges.

The 18th-century almshouse De Vos in Noordstraat only consists of six houses but this does not mean that this almshouse is less charming. The garden used to be limited to a lawn used for bleaching laundry. When the complex was renovated in 1994-1995, the garden was redesigned as well. Four beds bordered with box were planted with colourful flowers. 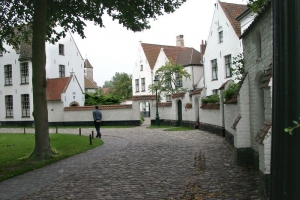