A “Gesamtkunstwerk” of Architecture, Garden Design and Landscape

Located on the eastern slope of the Habichtswald, Wilhelmshöhe hill park is a combination of a Baroque garden and an extensive landscape park. The hill park, which boasts famous water features and is crowned by a large sculpture of Hercules, has been Kassel’s main attraction for three centuries.

Although the large-scale Baroque concept conceived under Landgrave Karl was never completed, it still defines the park’s appearance today. The enormous octagon with its statue of Hercules and cascades forms the dominant element of the central axis, which continues along Wilhelmshöher Allee to the east of the palace as far as the town itself.

Landscape-style areas of garden stretch out beside the main axis. Landgrave Wilhelm IX had these laid out from 1786 and they were later extended to the north. These areas of apparently untouched nature are home to a large variety of species of trees and shrubs. The water features at the Baroque cascades are continued in “natural” form through the park and highlighted to special effect. Further attractions include the romantic Löwenburg (Lion Castle), the “Chinese village” of Mulang and the greenhouse with its orchids, palms and camellias.

An impressive view of the 240-hectare and hence largest hill park in Europe can be had from the west steps in front of Schloss Wilhelmshöhe, which houses a famous gallery of paintings of Old Masters. An application has been made to have the park added to the UNESCO world heritage list. Groups of trees, solitary trees and a columned hall alternate around the edges of the bowling green which stretches out in front of the palace. A large patterned flowerbed in front of the palace steps is a reminder of the period at the end of the 19th century when ornamental flowerbeds of this kind flourished in Kassel. At that time the imperial family came and stayed at Wilhelmshöhe every summer.

The “Tal der Flora”, formerly known the “Elysium”, is located below the south wing. It is particularly attractive when the numerous rhododendrons are in flower. This splendour of varied blossoms continues with a large variety of roses in the adjoining area leading to the “Lac” and “Rose Island”, which date from the period leading up to 1790. Court gardener Daniel August Schwarzkopf (1738 – 1817) already began breeding roses here at the beginning of the 18th century, among them the famous “Perle von Weißenstein”.

The fountain pool of 1817 lies behind the bowling green on the park’s central axis and is flanked by a circular temple. The water features end at the pool with a jet of water rising 50 metres into the air. A wide aisle revealing the Baroque Pluto grotto cuts through the dense park woodland on the upward slope. The upper area is dominated by the octagon with its grottos, cascade and the eight-metre statue of Hercules, the emblem of Kassel. The Löwenburg, which was erected by Landgrave Wilhelm IX as a private place of retreat and burial ground, rises up in the southern part of the park.

The plans initiated by Landgrave Karl (1654 – 1730) marked the beginning of the development. They envisaged the replacement of the old country castle and garden with extremely extensive grounds modelled on Italian Renaissance gardens. Giovanni Francesco Guerniero (around 1665 – 1745), the artist who was engaged in Rome for this purpose, designed a mighty cascade which was to stretch from the upper edge of the slope down as far as a new palace. However, only the upper part of this was constructed in the period leading up to 1717.

The octagon platform provides an impressive view over the park. Here is possible to see a typical feature of Baroque planning – concentration on a dominant water axis laid down through a wood bordered by hedges. The grottos below the octagon are the starting point for the water features, which have a mythological theme. The giant Enceladus, who was defeated by Hercules, is partially visible under rock masses in the “Riesenkopfbecken” (“Giant’s Head Basin”), and spews a jet of water at his vanquisher. To the sides, the figures of a fawn and a centaur announce the beginning of the twice-weekly water spectacle just as they did 300 years ago with resounding horns whose sound is produced by water pressure.

The Baroque cascade ends at the Neptune grotto and Neptune basin. The landscape park, which was laid out at a later date, starts here and stretches out beyond the castle 200 metres below. An extensive system of curved paths enables visitors to get varying views and impressions of the park’s characteristic, apparently natural areas and plants. Not being surrounded by walls or fences, the park gradually gives way at the edges to the surrounding landscape and woods. One design element which links all the areas of the park is water. In conscious contrast to the central Baroque axis, it is made to flow in a variety of ways through the side areas and is presented in particularly spectacular fashion at the “Roman” aqueduct, an artificial ruin.

The park’s expansion and fundamental redesign as a landscape garden was initiated by Landgrave Wilhelm IX (1743 – 1821) after he took up his place in government in 1785. He got rid of the small-scale areas and their multiple small buildings and figures on either side of the bowling green in front of the palace. These had been laid out by his father Friedrich II from 1760 onwards. Surviving elements of Landgrave Friedrich’s efforts in garden design – regarded as Anglo-Chinese in style – include smaller buildings such as the pyramid, “Vergil’s grave” and the Temple of Mercury alongside numerous exotic trees and shrubs. To the south of the palace, the “Chinese Village” of Mou-lang (Mulang) was created, where a small house and “pagoda” have survived largely intact. These objects from Friedrich’s time were included and incorporated into the thorough redesigning process which took place under Wilhelm IX.

Court gardener Schwarzkopf describes the planner’s objectives: “Everything which has been built harmonises with the region and has been carried out in a heroic and large-scale style.” This was also to be made evident in the new palace, started in 1785. Architect Heinrich Christoph Jussow (1754 – 1825) gave the building a particularly monumental appearance by including mighty columns, gables and a dome. The old name of the palace and park, “Weißenstein”, was changed to “Wilhelmshöhe” in 1798, the year when Jacob and Wilhelm Grimm came to Kassel.

The “New Waterfall” was created around 1830 during the final extension of the park to the north along with an area conceived by court gardener Wilhelm Hentze (1793 – 1874). This was planned as a charming landscape scene of great harmony. 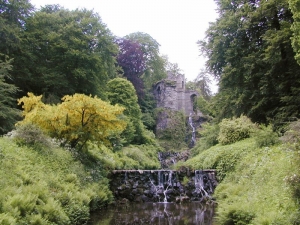 Events:
Water Garden from 1. May – 3. October.
Starts at Herkules-Monument: Wednesday, Sonday and Holiday 14.30.
Ends at 15.30 at the Great Fountains

Guided tours on the days above: 14:00 Uhr, Starts at ticket office at the Herkules-Monument.
Illumininated Water Garden: June until September, first Sunday of the month.