You Are Here:Home / European Themes / Carl-Duisberg-Park and Japanese Garden 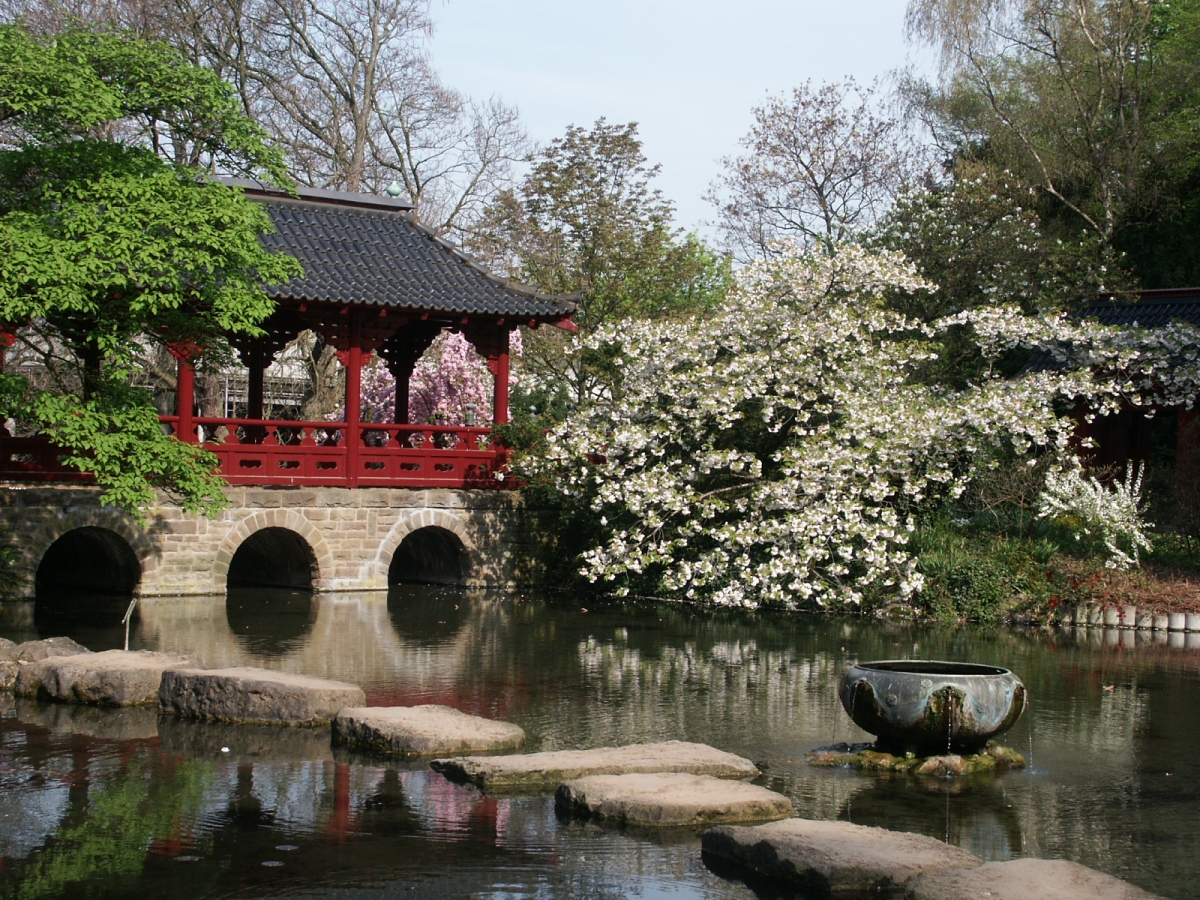 Today, the Carl Duisberg Park and Japanese Garden in Leverkusen form a ‘green island’ in the midst of a large industrial complex, the CHEMPARK. The park greets its visitors with sweeping lawns where tall solitary trees, groups of trees and stocks of shrubs create a varied scene. A well-developed network of paths links all the important points, e.g. the corporate headquarters of Bayer AG, the cafeteria, car parks and the entrances to the CHEMPARK. The park is adorned with elegant elements which give it a special aura, among them the tomb of Carl Duisberg (1861-1935) and his wife Johanna in the form of a Flora temple, and the Caritas fountain of 1923 designed by Professor Hugo Lederer.

The Japanese Garden lies nestled in this ensemble. This jewel, which can be only reached by three bridges, is like an enchanted garden. Located on an island, the Japanese Garden is home to a large number of Oriental shrubs and herbaceous perennials as well as beautiful features such as the Japanese teahouse, stone lanterns and a roofed bridge such as can otherwise only be found in Japanese Imperial Gardens.

The Carl Duisberg Park is characterised by its open nature and unostentatious design. Sweeping lawns invite visitors to linger throughout the year. The park is surrounded by various constellations of trees as well as stocks of woodland and shrubs. These and the plantings of evergreen bushes and conifers create various different garden areas throughout the seasons which visitors use in a variety of different ways.

The park is dominated by various shades of green. In autumn, however, green gives way to colourful fireworks of yellow, brown and red foliage which give the park a scenic atmosphere. Further smaller highlights are created in various places by diverse groups of herbaceous perennials, e.g. at the Flora, in the small heather garden and on the southern slope.

The Japanese Garden has a special atmosphere all of its own. As an island nestling in the Carl Duisberg Park, it has a mysterious, enchanted and secretive air. Striking elements include the teahouse, red bridges and gateways as well as the ponds surrounding the garden. The sound of babbling water constantly fills the air and is present throughout the seasons due to the supply of fresh water which flows in cascades into the ponds twenty-four hours a day.

In autumn it is the Japanese Maples which ring in the end of the garden season with their fantastic colouring. Winter in the Japanese Garden is also charming. The bare shrubs and trees reveal bizarre shapes, accentuated by Asian stone lanterns, temple dragons and figures. The garden is always an absolute oasis of calm within the busy activity of the CHEMPARK. 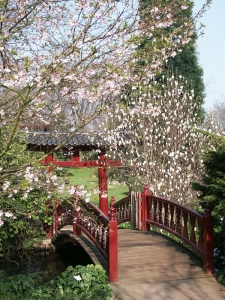 Tourist information:
Visitor Center: yes
Restaurant / Café: yes
WC: yes
Parking: parking
Signs on the plants: some
Benches in the park: yes
Barrier-free access: The main routes are accessible to people with mobility disabilities.
Program for children: yes
Dogs: Dogs are not allowed in the Japanese Garden
Cycling: Cycling is not allowed