You Are Here:Home / Gardens / Castle Garden at the Sleeping Beauty Castle of Sababurg 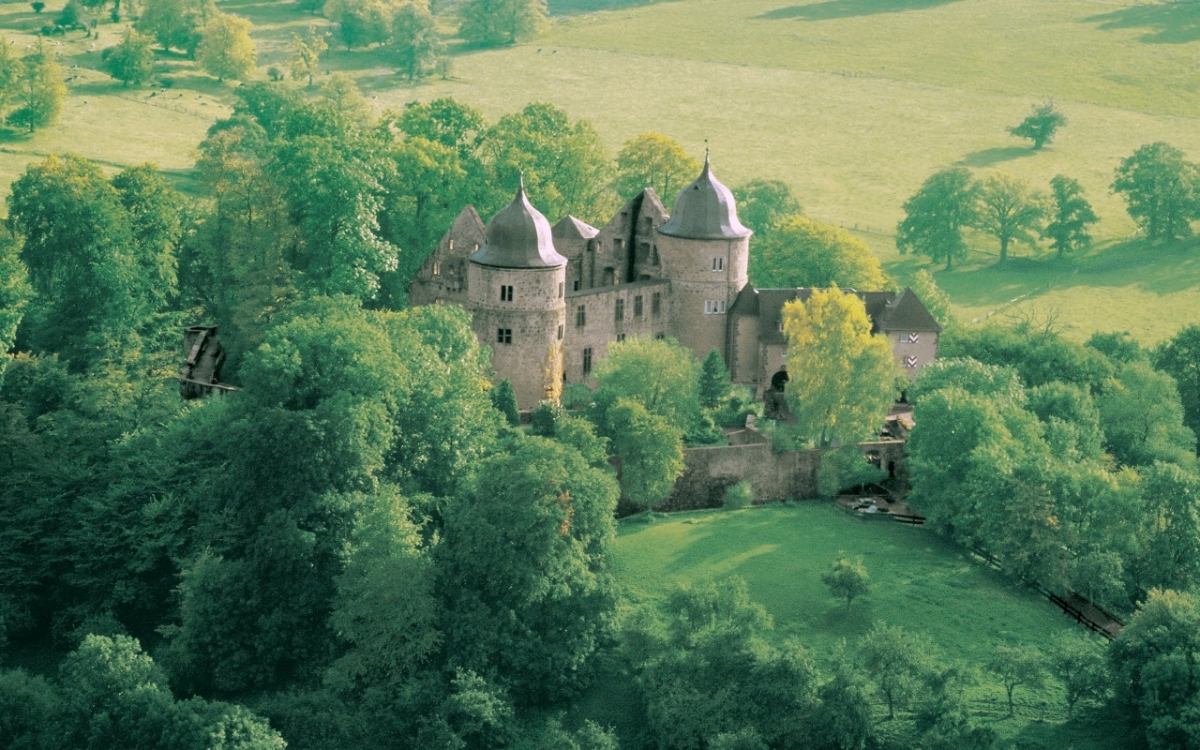 A small garden behind the castle ward wall in the ruin of the medieval Sababurg, also known as the “Sleeping Beauty Castle”, is a reminder of the tradition of kitchen and ornamental gardens in castles. The castle garden gives pride of place to roses, some of which climb up the old walls. Many traditionally cultivated flowers and herbaceous perennials with a long horticultural history can also be found here along with spices and medicinal herbs. Important features of the formally-structured garden include straight paths flanked by ornamental borders with profusely blossoming flowers, a broadened semi-circular space with a fountain, a hornbeam arbour and a rose arch.

A specimen of the rare “Kiftsgate” rose thrives at the east tower of the palace behind the garden. The small flowers of this wild climbing rose from the Himalayas can be seen in full bloom in mid-June. The ornamental garden is supplemented by a herb and kitchen garden in another part of the castle complex. This garden, which is surrounded by a picket fence and laid out with beds in a regular geometrical structure, combines the practical and the aesthetic in a charming manner.

Tradition has it that the Grimm brothers wrote part of their fairy tale in the gatehouse of the Sababurg, but there is no concrete evidence of this. The story led to the establishment of a “fairy tale museum” in the castle restaurant, opened in 1960, and finally to the linking of the Sababurg with the Grimm brothers’ well-known “Sleeping Beauty” fairy tale. Numerous roses have been planted in the castle grounds because of this reference with the result that the fairy tale motif of the hedge of thorns growing around the royal castle has become a realistic scene in the form of the impressive climbing rose at the east tower of the great hall.

Climbing roses and groups of roses planted between trees can also be found in the castle garden, which is enclosed by walls but still allows views of the surrounding countryside. These are always old rose species whose perfume, blossom colour and shape are deliberately used to give the small garden an enchanted, fairytale character. Roses such as the apothecary’s rose, cinnamon rose and the “Petite Hollande” centifolia were chosen for the garden following consultation with the “Roseninsel Park Wilhelmshöhe” association. The 12-meter high and 10-metre wide “Kiftsgate” rose at the east tower of the great hall is an imposing sight. Its blossoms can be seen in full bloom in mid-June. A rose arch at the garden’s east exit rounds off the varied display of this “queen of flowers”. It is a popular place for wedding couples, who can get married in the castle.

Old cultivated species determine the choice of flowers and herbaceous perennials for the garden as well as the medicinal herbs and spices planted here. Visitors can see summer flowers such as mulleins, mallows and wallflowers and herbaceous perennials such as delphiniums, peonies and columbines from June onwards. The area which was laid out around 1960 as a type of small-scale landscape garden was redesigned 20 years ago with a greater emphasis on formal elements. A straight main path with densely planted borders on either side runs from the gate to a small square and continues straight on to the rose arch from a slightly offset point.

The square is likewise surrounded by flowering borders and contains a fountain encased in natural stone, a reminder of the element of water, which is indispensable for all gardens to flourish. Smaller side paths provide access to the castle grounds and lead to the old half tower at the moat. A semicircular hornbeam arbour in the rear section of the grounds is a popular resting and viewing point which provides a good view of the garden.

Old spices and medicinal herbs ranging from basil and savory to wormwood and hyssop can be found in the herb and kitchen garden behind the restaurant. The picket fence, dry wall and regular form and layout of the beds here create the traditional kitchen garden style which was once found throughout this region.

Finally, the desire to retain old qualities and to revive these under ecological considerations is evident in the care given to the meadow orchards outside the castle. The existing stand of trees is to be retained and will be augmented by new planting with regional species.

The wildlife park created by Landgrave Wilhelm IV below the Sababurg in 1570 has survived. In 1590, the130-hectare park was already surrounded by the wall which can be seen today. The landgrave kept native game for hunting here and also went to great lengths to try and settle non-native animals in the park. However, the chamois and ibexes from Bavaria and the elks and reindeer from Sweden died almost without exception within a short time.

In the 18th century, a circle with six aisles radiating from it was created at the centre of the wildlife park for hunting. This typical baroque “hunting star” still defines the appearance of the terrain today, even if the aisles have now become avenues as a result of the extensive felling of trees which took place in the old woods from 1790 onwards. Animals have been kept in the wildlife park again since 1973. Native wild animals threatened with extinction and domestic animals can be seen in the institution, which is funded by the administrative district of Kassel. 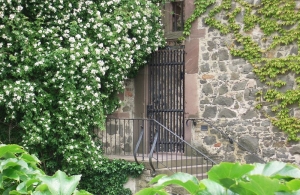