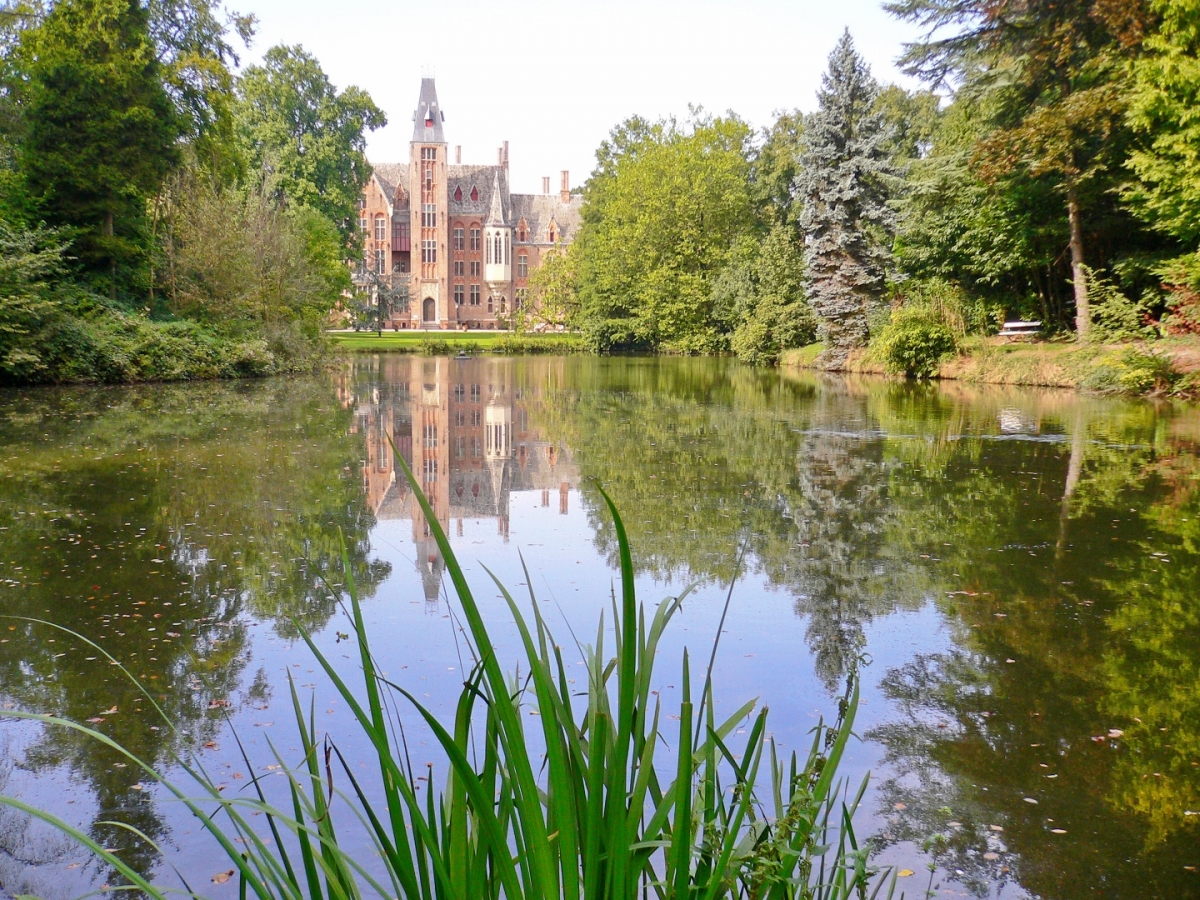 The neo-Gothic castle of Loppem is one of the most beautiful examples of a summer residence built by a noble family of Bruges. The picturesque castle is located on an artificial island, hidden in a vast landscape park. The design of the park was entrusted to garden architect Jean Gindra in 1851. A couple of years later, Charles van Caloen and his wife had plans drawn up for the spacious neo-Gothic castle, the walls of which are reflected in the ponds of the park. In 1873 the children of Charles van Caloen laid out a labyrinth in a corner of the castle grounds in which visitors can still get lost.

Visitors can nowadays stroll around the grounds at leisure. Wide avenues and dense stands of trees only give away their secrets sparsely, until a pasture at the edge of the woods gives a first view of the castle or until when suddenly a farm castle appears. It is hard to imagine a better invitation to pay a visit.

The history of the current castle grounds starts in 1756 when the de Potter de Drogenwalle family from Bruges bought the old parsonage of Loppem. They had the house demolished and built a classicistic country residence, where they stayed in summer. Around the castle a park was laid out consisting of a formal garden immediately in front of the residence and an adjacent landscape park. The 4ha large ‘Hulstbosch’, which Pieter Clement de Potter was able to buy in 1812, separated the entire area from the surrounding landscape.

The formal garden featured two octagonal pavilions, one of which has been preserved. The park featured various garden pavilions and follies, including a ‘Chinese’ bridge and a rock and cave complex.

The Van Caloen family came into possession of the castle and park in 1824 through marriage. Charles van Caloen and his wife Savina de Gourcy Serainchamps not only rebuilt the castle but also completely redesigned the park from 1850 onwards. In 1851 garden architect Jean Gindra made two designs for a completely new park layout in English landscape style which incorporated some elements of the early 19th-century park. The old ramparts were for example dug out further and converted into a wide and winding pond. The kitchen garden and some avenues were incorporated into the new park layout as well. The starting point of the entire layout was that picturesque and varying perspectives on a new castle still to be built would be created. This castle was to be located on the central area completely surrounded by water so that the neo-Gothic walls would be reflected in the pond.

Visitors were and are still able to walk in the landscape park along winding paths through oval pastures and marshland, across bridges, between deciduous and conifer trees and bushes, constantly surprised by other views of the castle and the park. The variegated plantations reinforce the picturesque character of the landscape park. The botanic abundance of the park was actually strongly encouraged by Charles van Caloen and his wife. Their special interest in botanic matters appears for example from their membership of the Ghent Société d’Horticulture et de Botanique and allowed them to recruit renowned Belgian horticulturists for their park plantations. Azaleas and orchids were for instance supplied by major Ghent florists.

As from 1873, a labyrinth was planted at the edge of the grounds near Steenbruggestraat by the brothers Albert and Ernest van Caloen under the supervision of their home teacher. The design of the labyrinth is said to be created by young Albert. With one and a half kilometres of green and copper beech hedges dozens of corridors were created which are completely separated from the rest of the park. Initially the labyrinth was only open to family members but in 1892 Albert van Caloen opened it to the public as well. It soon evolved into a popular attraction in the region and it still is today.

At the end of the First World War, Loppem Castle was also the setting of a major event in Belgian history. The Belgian King Albert I moved into the castle for approximately a month at the end of October 1918 and Loppem thus became the headquarters of the Belgian army and an international meeting point.

The castle and the park became the property of the Jean van Caloen Foundation in 1952 in order to protect the future of this exceptional heritage site. The park was opened to the public in 1974. One year later the castle was made accessible as well. Visitors cannot only enjoy the unique interior but also discover an important painting and sculpture collection. 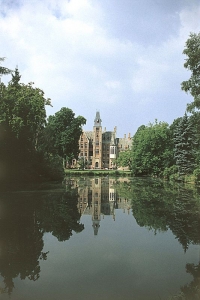