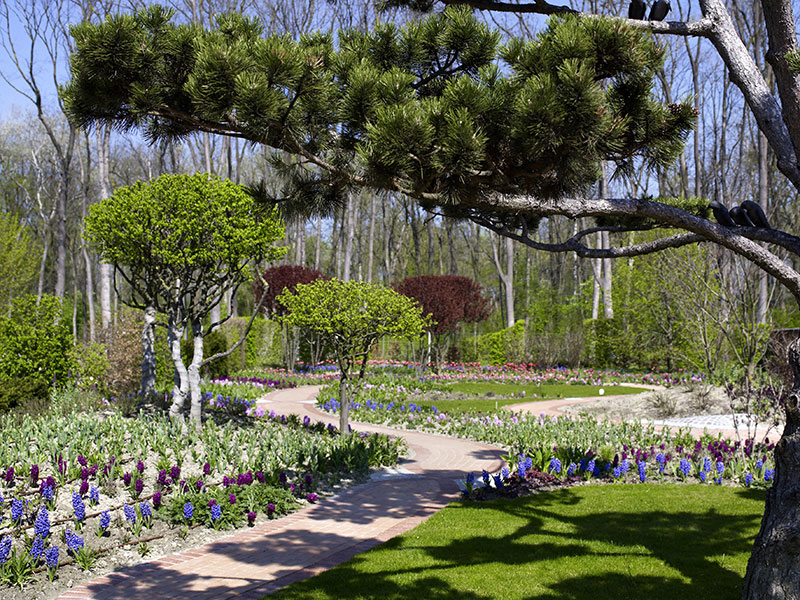 DIE GARTEN TULLN – the garden experience in Lower Austria – nestles gently in Tulln floodplain forest. Since its creation, DIE GARTEN TULLN has developed into a showcase project at European level. It has also been one of the most popular destinations for outings in Lower Austria since 2008. The ecological care of the gardens serves as a model for many other garden shows of its kind both in Austria and abroad. Throughout the grounds, the criteria stipulated in Lower Austria’s “Nature in the Garden” initiative are followed strictly by all the gardeners: no pesticides, no chemical-synthetic fertilisers and no peat.

Bright colours and wonderful gardens await visitors to DIE GARTEN TULLN garden experience. The more than 60 show gardens and sample gardens awaken in spring with more than 100,000 yellow narcissi, creating an impressive show of splendid blossoms. In summer, the scent of roses perfumes the air and the buddleias attract butterflies. Autumn is harvest time, and visitors can admire the huge pumpkins in the Garden of Giants. A further highlight is the treetop path at a height of 30 metres.

Following a construction period of two years, DIE GARTEN TULLN opened its gates to visitors for the first time in April 2008. The Garden Show was conceived from the outset with the same ecological criteria as those already developed for “Nature in the Garden”, an initiative throughout Lower Austria which was started in 1999 for private garden owners by the federal state government of Lower Austria.

DIE GARTEN TULLN is located to the west of the town, between the Tulln trade fair grounds and theRosenbrücke, a bridge across the Danube. The Regional Garden Show is divided into two areas: a smaller area covering 7 hectares which features show gardens and sample gardens for visitors to touch and re-create, and a large, 45-hectare area consisting of readily accessible floodplain forest which has been restored through the planting of various trees and shrubs. More than 500,000 plants have been planted in the show gardens and sample gardens.

The colourful diversity of the show gardens is embedded in a highly structured overall concept. Ecological structures give rise to elements such as meadows, wetlands and drylands, flowering herbaceous perennials and wild woodland plants from the region, which provide both habitats and food for native animals. Apart from various types of mulch, the natural garden is home to further elements such as aromatic herb beds and fruit and berry bushes, resulting in a supply of edible nibbles.

The restored floodplain forest consisting primarily of ash, poplar, some elms, elder and dogwood, invites visitors to take leisurely strolls and go on boat trips. A new wealth of species has been created by introducing typically found local seeds along the waterways and by planting more than 2,500 native trees and shrubs. The range of food available for native animals has also been improved by planting various types of wild rose as well as shrubs and berry bushes such as viburnum and cornel cherry.

The varied show gardens and sample gardens invite visitors to touch and re-create them.

In the Hedge Garden, the pale foliage of the hornbeams contrasts with the dark privet leaves while the ornamental grasses move gently and delicately in the wind to form an elegant accompaniment.

The misty wood enchants visitors, drawing them into a mystical world. Mist spreads out as if by magic. Bizarrely shaped copper beeches accentuate the unusual character of this abstract forest garden.

The unique cultural landscape of the region is shown in the Wachau Garden. Stone walls form terraced vineyards, and the appearance of the Wachau landscape is defined by almonds, apricots, quinces, vineyard peaches, yellow Spilling plums and sweet chestnuts.

In the Portuguese Garden, the elements of water and wine, flowers and art create a link between garden and culture. Bands of water inspired by Moorish irrigation channels thread their way through the garden. Vines cover the tall arbour.

The Egon Schiele Garden translates the Expressionist work of Tulln artist Egon Schiele into the language of garden design. Citations from pictures such as a washing line, a nude, a mirror and sunflowers seen through a window effect an intense exploration of Schiele’s work.

In the Garden for the Wall, plants put down vertical roots into various substances which are being tested for their suitability for facade-bound vertical greening.

The shoots of willow branches measuring up to 5 metres in length form a thick roof of foliage in the Willow Thicket. Bright green wood chippings cover the narrow trail, which is an invitation to explore the jungle-like floodplain forest playfully.

The Hydrangea Garden conjures up romantic garden scenes through its lush planting with hydrangeas accompanied by hostas, meadow-rues and bleeding heart.

Blossoms in all shades of white shimmer in the English garden, which is modelled on the “white garden” at Sissinghurst. Silver foliage accentuates the understated charm of the flowers while stones in mild shades of grey provide an attractive framework for the composition throughout the year.

A further highlight of the Regional Garden Show is the treetop path with its viewing platforms. The 700-metre path winds its way up to a height of 30 metres. Conceived as a viewing tower, the path enables visitors to enjoy the panoramic view over the town of Tulln, the treetops of the Danube floodplains and the show and theme gardens themselves.

DIE GARTEN TULLN has already established itself as a showcase project at international level. Renowned show gardens from all over Europe turn to the experts of the Tulln Garden Show to adopt its ecological ideas. 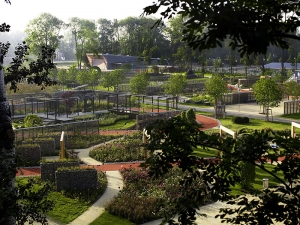