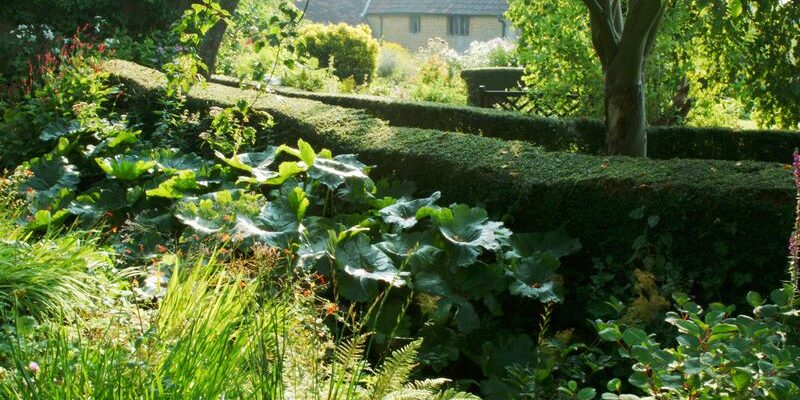 East Lambrook was the home of Margery Fish, the mother of English cottage gardening. Margery Fish’s articles and books are so popular that they are rarely out of print. Her ideas shaped gardening to the economic realities of post-war Britain, opening the joys of plants and simple design from a preserve of the rich to a pleasure for everybody.
Grand vistas of stately homes are replaced with the cosy intimate experience of wandering through crowded flowerbeds. Visitors invited today can continue to savour the intimate gardens of East Lambrook, restored and kept as a living breathing entity to the memory of Margery Fish.

East Lambrook was also one of the first Nursery gardens and still functions as a productive garden today, propagating on site diverse geranium and euphorbia collections, as well as a wide variety of cottage garden perennials suitable for all gardens. Plants from the gardens can also be enjoyed as ingredients in the meals from East Lambrook’s award winning teashop.

East Lambrook manor was home to the formidable and remarkable mother of the English cottage garden, Margery Fish.

Her trials and successes are recorded in print; she published her first article in The Field in 1951 and then the first of eight books in 1956 with We made a Garden. Margery Fish’s approach to gardening on a more intimate scale opened it up to those who couldn’t afford a team of gardeners, making it for the first time a pleasure for the masses. Readers rejoiced in the stories of her early mishaps and clashes with a much more traditional Walter over garden design. The nation was seduced by her personal knowledge of every plant in her garden and inspired by her careful cultivation of rare and interesting species, including Stachys byzantina, an eighteenth century introduction from Caucus that she found lingering in a nearby cottage garden.

Margery graduated from secretarial college in 1911 with distinction, moving into employment with the Daily Mail. After the First World War she was awarded an MBE for her courage in crossing an U-boat patrolled Atlantic with Lord Northcroft in 1917. When she returned to England she met her future husband, Walter Fish the Daily Mail’s news editor. In 1937 the couple looked to move away from the centre of London and they purchased East Lambrook Manor. At the age of 46, with no training or experience, she began her groundbreaking career as a gardener.

Today, East Lambrook is maintained how Margery Fish would have wanted it to be, it remains the quintessential English cottage garden.

The slopes to the west of the garden are split into ‘chaotic’ terraces made of stone slabs. Here Margery’s vision of ‘jungle planting’ is most evident, with beds stuffed full of plants, brimming over the edges and leaving no patch of soil uncovered.

Pink geraniums, white candytuft, pulmonarias, shamrock and catmint are crammed into the beds, gypsophilia, aubreta and cheddar pink spill over the walls and London pride, white rockcress, stonecrops and rock campanulas fill the cracks in the stonework.

The terraces lead to a top lawn, a wonderful spot to sit and relax, and the White Garden, a product of many friendly disagreements with the novelist Vita Sackville-West (who helped restore nearby Montacute). The white garden was designed with white flowering plants that should bloom in spring and features Margery’s very favourite – the double white primrose.

A more recently enlarged south facing ‘Silver Garden’ is planted with Mediterranean silver plants that benefit most from the full sunlight. This striking garden is chock-full with silver and grey plants of contrasting shapes and textures, mixing in pale pinks, pale blues and bright reds that strive to catch the eye.

The eastern half of the garden is even more varied. Inside a small copse of trees a wild Green Garden, designed as a home for plants that need shade, is home to the rare white flowering judus, a mature quince, a medlar and a green flowering rose. Nearby, the Wooded Helleborous Garden and Snowdrop Garden became famous in the mid-twentieth century for their glorious displays of over 200 rare snowdrops and masses of helleborus during early spring.

Walter and Margery purchased a neighbouring Orchard with the aims of making the ditch between their garden and the new land into a water feature. However, widening the ditch caused it to dry unexpectedly. Undeterred and unconventional, Margery converted the banks into flowerbeds. The ditch is stunning in spring when hundreds of scillas, bluebells and hellebores spring to life alongside young ferns, heuchera and geraniums. At the Ditch’s end a stone ‘Lido’ was built as a short-lived cascading water feature. The Lido today is a damp, shaded haven for hostas, rodgersias, ferns, primroses and a floral waterfall of white flowering wisteria.

Margery Fish was famous for her generosity, handing out samples to visitors from far and wide to the extent that her own garden was almost stripped bare several times. This led to the development at East Lambrook of one of England’s first dedicated nurseries. The tradition is continued today at East Lambrook with an extensive nursery and plant sales area. The garden is famous for its hardy geraniums, euphorbia and wide variety cottage garden perennials suitable for all gardens, cottage or not. East Lambrook also operates an award winning teashop, using ingredients grown in the garden. The seating area for refreshments is surrounded by a scented garden where visitors can enjoy refreshments among the daphnes, roses, and lavender. 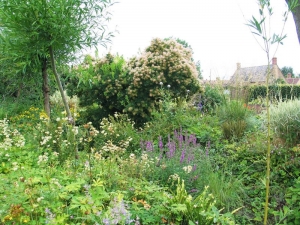 Children’s programme/ events or other educational activities::
A variety of lectures and courses for adults. See www.eastlambrook.co.uk/html/events.htm for details.

Maps of sites/ visitor information etc:
A free map complete with information is provided upon entry. Translations in English, French and German available.