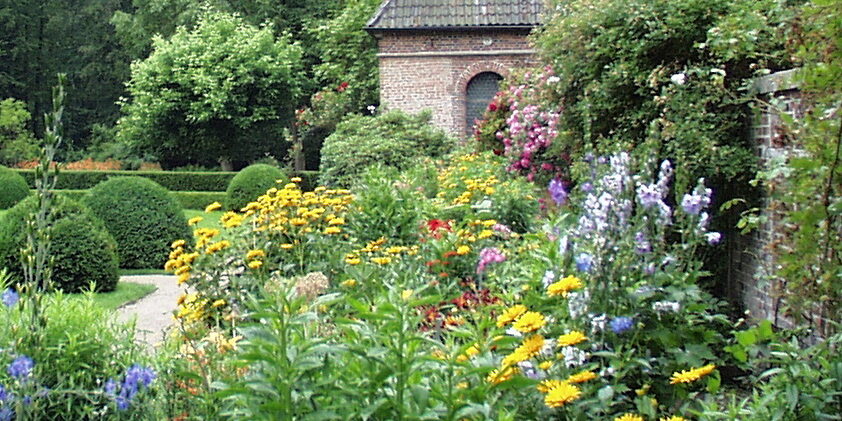 Haus Welbergen is a relatively unknown treasure in the northern Münsterland. A walk along the extensive moat system is particularly worthwhile, as the paths continually provide charming views of the moated house.

The well-tended gardens on the forecastle island are the most popular attraction for many visitors today. An atmospheric garden based on historical designs was created here in place of two domestic buildings.

A fountain inspired by Renaissance forms gives the garden a peaceful, contemplative quality. There is a small garden area which can be traced back to the Renaissance era on the far side of the Marienkapelle (Chapel of Our Lady) on the forecastle island.

Today’s carefully tended gardens have a special charm. Gate pillars from 1730 mark the entrance to the garden island. While this was used intensively for cultivation in the past, it is now only home to some fruit trees. A number of very large solitary trees are an indication of the probable Baroque splendour of the past. Two further gate pillars mark the entrance to a landscaped area with rhododendrons and solitary shrubs.

Haus Welbergen and its gardens are a particularly attractive destination in the summer months, when the shrubs and roses are in bloom.

The seven-century history of Haus Welbergen is reflected in the buildings and historical design of the gardens and landscape of the old estate. It was a tremendous stroke of luck for the moated house and its lands that the Dutch couple Jan and Bertha Jordaan-van Heek acquired the complete complex in 1929.

A stroll through the grounds along the extensive moat system and a visit to the forecastle and its elaborately-designed gardens are especially worthwhile for visitors to Haus Welbergen.

There is a long garden behind the mill in the north-east part of the estate. Comparable to a Baroque garden island, it is for the most part surrounded by a moat. Two gate pillars dated 1730 mark the entrance to the garden. Evidence of its historical design can still be seen today at its north-east edge in the form of a small central pavilion which acts as a focal point and several old trees, which were probably planted as part of the Baroque garden. These include an enormous plane tree, a large yew tree and a gnarled sweet chestnut tree. Today, they are covered by a tree protection order.

The garden is now planted with fruit trees and is used as a bee pasture. It is not clear whether it was once a pleasure garden or a large garden for domestic use. A bill from 1740 made out in the Dutch city of Haarlem for plants for Haus Welbergen lists a delivery of tulip and hyacinth bulbs as well as tobacco plants. In addition, a letter from 1871 mentions several Seville orange trees. There is no indication as to where the sensitive orange trees were placed or how they were brought through the winter.

The entrance to a further interesting area of the garden outside the moat is again marked by two gate pillars erected in 1730. The path runs between the house moat and the Gauxbach (Gaux stream), past the granary and through a landscaped area with beautiful solitary shrubs and numerous old rhododendrons. This area was once part of the outer ramparts of the strongly fortified castle. The ramparts were almost certainly levelled when Franz Caspar Cajetan Bucholtz developed the estate in Baroque style, and various shrubs were planted here over the years. Most of the solitary shrubs and rhododendrons were probably planted in the 19thand early 20th centuries, with the exception of a mighty old beech tree in the south-east corner of the area.

The path continues along the Gauxbach through an interesting wooded landscape with an extended moat system. The area to the south of the moated house is enclosed by the course of the stream and two arms of the moat. As early as the 19th century, this was devoid of trees and was probably used as a pasture or as a bleaching field. The extensive moat system was presumably created to improve the defences of the estate and to ensure a supply of water for the wide house moat. It is, however, also possible that it was designed as a wildlife park for hunting in the 17th or 18th century. It is certainly known of the Bucholtz family that they had an aristocratic lifestyle although they were of bourgeois origin.

Walking through the well-tended paths in the woods, observant visitors can discover numerous elements of the cultural landscape which has developed over the years. Another historical garden element is an old, dense hornbeam hedge which runs around three sides of a large square area.

The gardens on the forecastle island are the most popular attraction for many visitors today. In 1962, the Foundation Bertha Jordaan-van Heek created a geometrical garden based on historical designs in place of the domestic buildings which had originally stood in the courtyard and instead of two buildings constructed directly at the north wall. This atmospheric garden was planned by the Westfälische Amt für Landespflege in Münster and its director at the time, Egon Barnard. The fountain in the centre of the garden was created on the basis of Renaissance models and is a further element of the garden’s design from this period. The garden is a charming attraction for visitors, particularly during the summer months when the shrubs and roses are in bloom.

Beyond the Marienkapelle (Chapel of Our Lady), there is a smaller garden which can be traced back to the Renaissance era. This was probably used as a kitchen garden for many years and only converted into a small landscaped area with selected solitary shrubs in the 19th century. Among the oldest plants today are an old hornbeam and a strikingly-shaped ash-leaf maple. There is a sheltered spot for sitting out of doors on the south side of the chapel at the edge of the small garden.

Haus Welbergen is known throughout Westphalia and beyond as an atmospheric venue for international conferences and meetings. It is also highly regarded by visitors from the neighbouring Netherlands.

Visitors can combine their rewarding walk through the interesting grounds with a stop at the “Alte Poststation” restaurant. This building originally stood near the village of Welbergen but was transferred in 1966 to its present location. It now stands on the street which follows the former postal route from Münster to the Dutch town of Zwolle via Gronau. 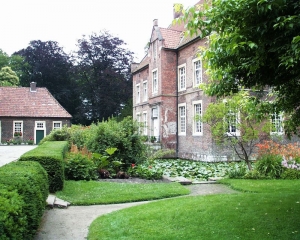 Opening times:
Park and garden open all year, during daylight
Guided tours through the house by appointment only (Tel: 02553-972728).

Customer services:
Shop: no
Restaurant: none on site, but near-by
WC: no
Parking: Free ample parking
Seats, benches: In the courtyard (during season)
Average visiting duration: 90 minutes
Accessibility: Inner courtyard and access path only
Events for children and young people: no

Map of site and additional information: no

How to get there
By car: Motorway A31, exit 31 (Gronau-Ochtrup)
By train/bus: Train station in Ochtrup or Metelen-Land