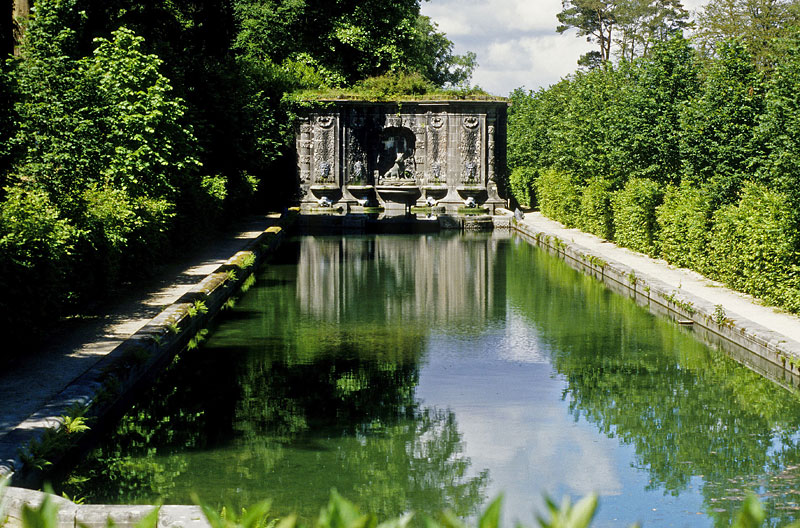 The 85-hectare park combines various styles and is a collection of 19th-century trends in landscape design. Commissioned by James de Kerjégu, the gardens have been either restored or redesigned. They consist of the regularly structured “French” garden, the Italian-style garden with its water basin, and the “picturesque” garden enlivened by waterfalls. The collections of plants (rhododendrons, camellias, hydrangeas) add a new dimension to the English garden. The park is characterised by numerous majestic trees which act as defining elements. They are living witnesses to the time of its creation at the beginning of the 20th century.

The history of Domaine de Trévarez bears the signature of one man: James de Kerjégu. Over a century ago, this wealthy politician decided to build the famous pink château on the slopes of the Montagnes Noires in the centre of Finistère. And so it came about that the former Domaine de Trévarez, which originated in the Middle Ages, found itself amidst the vibrant modernity of the “belle époque”.

The château was constructed in the 19th century, halfway up a wooded slope which rises over the Aulne valley and the municipality of Châteauneuf-du-Faou. This location was chosen for its architectural setting as well as for its demonstration of political power and its scope for technical realisation. The park itself was created at the heart of an extensive expanse of woodland which remains a defining characteristic today. Its various stylistic elements encompass diverse landscapes.

The ornamental gardens are located such they can be seen from the impressive rooms of the west pavilion. They are grouped around the French garden to the north, which is defined by symmetrical avenues and greened parterres. The Italian garden and the “hunting basin” – thus named due to its ornamental figures – extend from the foot of the west terrace to the “belvedere”, which rises above the former quarry and its camellias. Following years of abandonment, these gardens have undergone restoration or re-design.

Theme gardens such as the Japanese garden and the camellia quarry add an extra element of interest to the English garden. The Japanese garden was probably inspired by the English-Chinese garden of “Domaine de Courances” while the romantic garden on the site of the former quarry boasts water features and waterfalls in a rocky setting.

The English landscape park connects the estate to the surrounding rural area and highlights some important structural elements such as lines of sight and remarkable trees.

The château is located amidst expanses of lawn surrounded by groups of trees and groves comprised of exotic species (various conifers, rhododendrons and camellias). The edges of the large green areas are ornamental in design and emphasise the tall ornamental trees (beeches, purple sycamore maples, linden trees, tulip trees). Large conifers serve as points of orientation in the landscape, marking the entrances to the park (araucaria avenue, Moniven avenue, sequoias at the château) and the corners of the château terraces (giant sequoias at the east terrace, thujas at the west terrace). Many of these trees are of particular note due to their age and size, and are also witnesses to the park’s original creation.

The modern collections of plants consist mostly of heathers. These collections reflect the planting of the “belle époque” and are arranged today according to their flowering period: the camellias between the stables and the château, the rhododendrons to the west, and the hydrangeas in the large meadow.

The collection of hybrid rhododendrons has been awarded the distinction “national collection” by the “Conservatoire des Collections Végétales Spécialisées”. About 700 species are represented here. The park also contains an extensive collection of camellias (650 varieties) and smaller collections which are continually being expanded: hydrangeas, fuchsias, magnolias, oaks, Japanese maples. Apart from the variety of taxa, the aim of these collections is to show the plants in their natural form, without any pruning or clipping. Some of the specimens which date from the time of the park’s creation still survive today and have reached impressive sizes, among them the heather “Allée de la Marquise”.

Attempts have been made since 2006 to ascertain the original design of the park. This is done by identifying the locations of the 100-year-old plants, comparing the currently visible structure with large parks created at the same time as Trévarez, and consulting archive documents. Particular attention is given to the care of the avenues: two walks opened in 2010 and 2011 enable visitors to discover various types of path, buildings and plant collections.

The former vegetable garden was re-opened to the public in 2014. Its original structure is emphasised as a visible reminder of the old vegetable garden. At the same time, the building work uncovered the historical greenhouses and brought to light their metal structures.

The Domaine de Trévarez was recognised as a “Patrimoine du 20e siècle” (Cultural Monument of the 20th century) in 2004 and awarded the distinction “Jardin remarquable” by the Ministry of Culture and Communication in 2006.