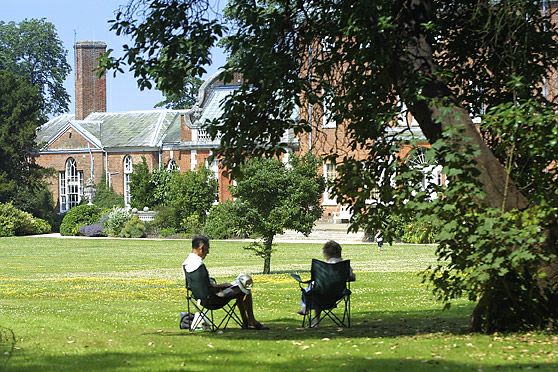 Hatchlands house and park lie just east of East Clandon village, near Guildford, north of the main Guildford to Leatherhead road (A246). The National Trust owns the estate of 170ha, which includes the park of 80ha. The house and garden are regularly open to the public. The house is approached through the park, which has a good legacy of large, old trees.

The solid, redbrick house at Hatchlands was built in the 1750s, for Admiral Boscawen, hero of the Battle of Louisburg. It contains splendid interiors by Robert Adam, decorated in appropriately nautical style. It houses the Cobbe Collection, the world’s largest group of keyboard instruments associated with famous composers such as Purcell, J C Bach, Chopin, Mahler and Elgar, as well as with Marie Antoinette.

The surrounding parkland was re-designed by Humphrey Repton around 1800. Early in the 20th century Gertrude Jekyll designed gardens adjoining the house, one of which has recently been restored and is at its best from late May to early July. Another attraction is the bluebell wood, which flowers in May. Mr H Goodhart-Rendel gave the property to the National Trust in 1945.

Domesday records the Hatchlands estate as belonging to the Abbey of Chertsey in 1086 and the first visual record of the park is shown in a map of 1693 drawn by John Seller. The more recent history of the park falls into three important periods. The first coincides with the purchase of Hatchlands by Admiral and Mrs Frances (‘Fanny’) Boscawen in 1750. The Boscawens landscaped the park and created new walks and woodlands. By 1755 Mrs Boscawen had made her New Walk by the side of the main road from the quarry to the park boundary. Many of the older trees on the estate date from this period. In 1756 the Boscawens pulled down the existing, old house and began building the present house, designed by Stiff Leadbetter. They moved into their new house in 1759 but the Boscawen’s enjoyment of their new house and landscape was cut short by the Admiral’s death in 1761. Mrs Boscawen was left the property and continued to live there for another nine years, selling Hatchlands in 1770 to William Brightwell Sumner, who commissioned Benjamin Armitage to make alterations to the park. His son, George Holme Sumner inherited the estate.

In 1796 George Holme Sumner asked Humphrey Repton (1752- 1818) to redesign the park and garden. The proximity of the Guildford to Leatherhead road, which then passed between the house and kitchen garden was of concern to Repton and his proposals were to screen the road from the house and to lay out drives to the east and west of the house, passing through the park. He also proposed the creation of a pleasure garden around the house with an inner circuit around a lawn to the east of the house linking with Mrs Boscawen’s New Walk. To the north east of the inner circuit, Repton intended a treillage greenhouse or orangery.

Not all of Repton’s recommendations were executed. An early 19th century survey map shows new drives, new lodge and the park extended to the east. Stuart Rendel, later Lord Rendel purchased the estate from the Sumner family in 1888. Lord Rendel moved the main entrance of the house from the west to the east front, altering the drives as a consequence and creating a new entrance to the east in 1909.

In 1900 Gertrude Jekyll supplied plans for formal gardens with only the south garden laid out as Miss Jekyll intended. The Guildford to Leatherhead road was also rerouted further south. H. S. Goodhart-Rendel who inherited Hatchlands on the death of his grandfather in 1913 was a well-known architect and altered the garden immediately surrounding the house. In 1914 he asked Miss Jekyll for detailed planting plans for the south garden. Her first plan, bright and cheerful in red, orange and yellow, containing cannas, coreopsis, marigolds and calceolaria, was not acceptable, a note in her handwriting states ‘ this proposed arrangement too late as they are away in August’. The second plan, which was implemented, was for a June garden, and contains roses, peonies, tree lupins, catmint, columbines and iris.

In 1945 Goodhart-Rendel transferred the house and park to the National Trust. Today the house still sits within old parkland with flower gardens near to the main building. A magnificent specimen of an Oriental Plane (Platanus orientalis) stands to the south of the house, near a temple which was brought from Busbridge Hall, near Godalming by Mr Goodhart-Rendel in 1953 and dedicated to his mother. To the east, on the edge of a chalk quarry, which had been made into a garden, is a fine example of an icehouse, with a three bay entrance front. 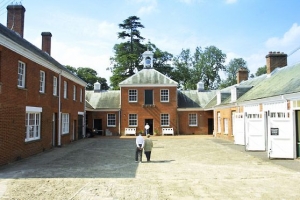 Events, exhibitions:
There is a programme of events throughout the year