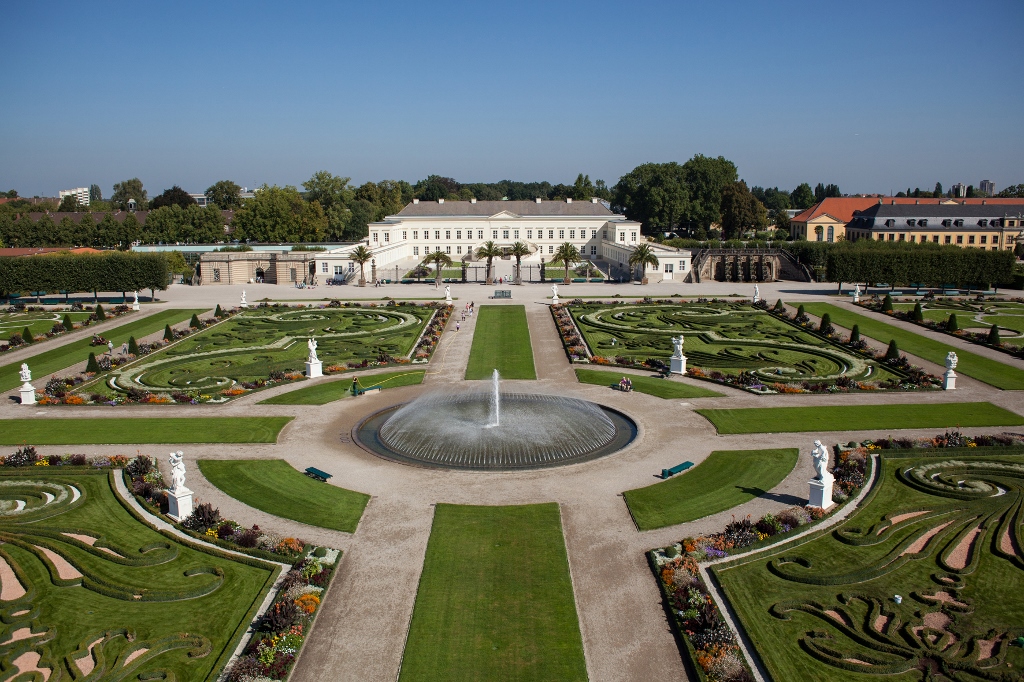 They are among the most beautiful parks in Europe: the Herrenhausen Gardens in Hanover have been representative of (garden) design and culture of the highest quality for over 300 years.

As a Baroque garden which has remained almost unchanged over the years, the Grosser Gartenimpresses with its formal layout, splendid parterre, water features, and colourful grotto designed by Niki de Saint Phalle. The erstwhile summer residence of the Welf (Guelph) dynasty still conveys a sense of royal living today. Reconstructed as a conference centre and museum, Schloss Herrenhausen(Herrenhausen Palace) now forms the architectural reference point for the gardens again.

There is much to discover in the Berggarten for garden and plant lovers. Approximately 12,000 different types of plants thrive in one of Germany’s oldest botanical gardens. Among the plants which can be seen in its show houses are up to 800 flowering orchids. A fascinating underwater world and over 6,000 tropical plants can be experienced in the Sea Life Aquarium at the centre of the Berggarten.

In the Georgengarten, the idyllic landscape scenes comprised of lawns, still pools and decorative bridges invite the visitor to take an interesting or even meditative stroll.

Garden Design at the Height of Perfection

An almost unchanged example of a Baroque garden with a formal layout, splendid parterre, bubbling cascades and fountains, the Grosser Garten invites visitors to explore it at their leisure. “The garden is my life” – these were the words of Electress Sophia (1630 – 1714), who had the garden created from 1679 to 1714. The palace, erstwhile residence of the Welf dynasty, was destroyed during the Second World War. Reconstructed as a conference centre and museum, it now forms the architectural reference point for the Herrenhausen gardens once again. Both the gallery building with its frescoed ballroom and the unique historical hedge theatre are also testimony to the sparkling life at court. (History of the Gardens)

The grotto designed by Niki de Saint Phalle is a fascinating modern addition. The French artist used figures, glass mosaics and pebbles to create a walk-in work of art which radiates happiness and joie de vivre.

There is much to discover the Berggarten for garden and plant lovers. Countless native and exotic plants thrive in this botanical garden which houses, among others, one of the largest orchid collections in the world.

Near-natural, landscaped and varied areas such as the prairie, the herbaceous garden and the “paradise” invite visitors to stroll and enjoy the changes throughout the garden year. Flowering magnolias and rhododendrons in spring, prairie perennials and grasses in late summer and the moor pond in winter are just some examples of the many beautiful facets of the Berggarten. Up to 800 flowering orchids and plants from all over the world are constantly on display in its show houses. A 300-year-old avenue of linden trees leads to the mausoleum of the Royal House of Hanover. Electress Sophia, King George I of Great Britain and many of their descendents found their final resting place there.

Georgengarten – Strolling in a Landscape Scene

The Georgengarten, which was laid out in the 18th and 19th centuries in English-landscape style, was conceived from the outset as a park for the people. And it has remained so to this day. The lawns, pools, rare trees and lines of sight in the Georgengarten create a landscape scene for visitors to explore. The two-kilometre Herrenhäuser Allee – a four-row avenue of linden trees – once linked the Herrenhausen summer residence with the city of Hanover. 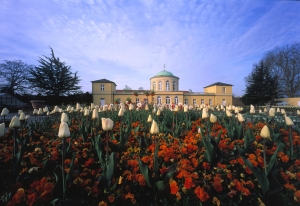 Admission:
Großer Garten, Berggarten and Museum Schloss Herrenhausen: 8 Euro
Berggarten only: 3,50 Euro.
Free entrance for children up to 12 years.
Updates and information on reductions etc. can be found on www.herrenhaeuser-gaerten.de

Customer Services:
Shops: In the lobby of the museum and garden shop.
Museum: Museum Schloss Herrenhausen and Wilhelm Busch Museum
Restaurant/Cafe: “Schlossküche Herrenhausen” and some others near-by
Parking: Visitor parking at Großen Garten/Georgengarten (payable). Additional parking on the street „Am Großen Garten“ (payable).
Toilets: Some, also disabled, toilets close to the parking, on the site and in the Schloss

Map and information:
Garden map: Pdf for download here
Plant labels: Many plants in the Berggarten are labelled
Seats and benches: Many
Average visitor duration: Half day

Accessibility:
All main paths as well as the show houses in the Berggarten and the museum are fully accessible. For assistance such as wheel chairs and E-scooters please contact (0511) 168-34000.

Dogs/Bikes:
No dogs and bikes in Großer Garten, Berggarten and museum.