You Are Here:Home / Gardens / Hestercombe Gardens Landscape gardens were built into the combe behind Hestercombe house by Coplestone Warre Bampfylde 1750s and feature a series of artificial lakes, a man-made waterfall and various folly buildings to explore.

A Victorian terrace was added behind the house in the nineteenth century and the Edwardian garden is regarded by many as the finest surviving work of Edwin Lutyens and Gertrude Jekyll, the premier garden designers of the early twentieth century.

Due to years of neglect, these gardens were lost for a long time, but after years of restorative work first by Somerset County Council and then by the Hestercombe Gardens Trust meant that in 1997 they were reopened to the public for the first time in 125 years.

Coplestone Warre Bampfylde built a landscape garden into the combe behind his house in the 1750s. It was famous throughout the country for its winding walks through nature, its four man-made lakes its magnificent man-made waterfall. Bamfylde also decorated his garden with a number of folly buildings and huts. These buildings were created to look like something, for example a temple, but actually serve no actual purpose except to help immerse the visitor in the fantasy setting at Hestercombe. For years people were invited to lose themselves in the eighteenth century equivalent of a modern theme park, where artificial landscape features and natural creatures were the equivalent of modern roller-coasters and costumed characters.

Unfortunately, centuries of neglect including the planting of an evergreen forest in garden meant for years the gardens were lost. However, over the last decade Bamflyde’s Landscape garden has been restored to its former glory. In 1997 the gardens were opened for the first time in 125 years and Over 35 acres of lakes, temples and wooded walks are open for visitors to explore.

Bampfyldes’s artificial waterfall, The Great Cascade, thunders into a plunge pool again after years of running dry. The paths – cleared of shrubbery and overgrowth – wind their way around the lake and up through the sides of the wooded combe. Bampfylde’s original vision had been to immerse the visitor in woodland, leaving carefully designed gaps where he thought the views would be spectacular and the restoration team worked hard to re-realise this vision in the modern gardens. During summer the views through the gaps are excellent but towards winter the thinner trees open up the vistas to make them spectacular.

The follies have been reconstructed on their original spots, always facing a pre-conceived view. Creative designs and names will spur the imaginations of both children and adults: the Gothic Alcove, the Witch House, the Mausoleum and Temple Arbour can all be explored.

Gertrude Jekyll in 1889 led to the most famous partnership in garden design of the late nineteenth and early twentieth century. Lutyens was a young architect with little education but a keen artistic flair and Jekyll was a painter, metalworker and embroiderer who had turned to gardening because worsening myopia made it difficult to continue her work in these crafts. The powerful combination of Lutyens’ distinctive architecture and Jekyll’s bold gardens created some of the most desirable properties in Britain, Europe and North America. A trademark of Jekyll was her use of strong, bright colours flowering at the same point and highly scented flowers, probably due to her gradual loss of eyesight. Their work was highly sought after and Lutyens/Jekyll garden was seen as the essential fashion statement.

Hestercombes’s formal garden, covering 3.75 acres, is one of the finest surviving products of the partnership. It was replanted in the eighties using Jekyll’s original records, remarkably discovered pinned up in the potting shed! The Orangery is the finest remaining Lutyens building of its type, and is still used in winter to shelter the orange trees.

The Edwardian garden is of distinct contrast to the ruggedness of the Landscape garden. Lawns and flowerbeds mix with the contrasting colours of pinkish-grey shale and sandy, warm hamstone. Luxuriant plants that overhang and creep up walls create a romantic ‘secret garden’ feel. Gaps in the stone steps allow daisies to burst through underfoot, adding a dash of cheer and colour. Clumps of daisies can be found all over the garden, spurting like fountains out of the walls and stonework.

The centrepiece is a sunken garden of 125 square feet where shale walkways divide broad grass panels and bright flowerbeds full of bright and aromatic lilies, roses, peonies and delphiniums.

Flanking this centrepiece on either side are two raised waterways, the rill terraces. The sound of the constant trickle of water makes the garden feel perky and alive.

The plantings on either side of the terraces are a haven for plant lovers, and are totally different to each other. Gypsophila, scarlet poppies, asters, lavender, echinop, red-hot pokers and iris on one side and white lilies, orange lilies, old roses, delphiniums, campanulas and foxgloves with edgings of London pride, pinks, saxifrage, hostas and bergenia on the other. The sunken rills are home to forget-me-not, water plantain, arum lily and arrowhead.

This comprises two separate areas. The formal Terrace laid out to the south of Hestercombe House is planted with a variety of bedding in the patterns reminiscent of Victorian parks and gardens. Restoration work has opened up this part of the garden and the yew hedge walk is now an important landmark feature.

Throughout the year Hestercombe is home to many and various events: car shows, flower shows, theatre, music, painting exhibitions, historical re-enactment and even medieval banquets! Nature events focusing on the wildlife in the garden and speeches by experts on local history and on the gardens are all on offer. At seasonal times of the year Hestercombe is especially alive with its Halloween Walks and Christmas Fayre. The newly opened visitor facilities make Hestercombe a place worth visiting all the year round. 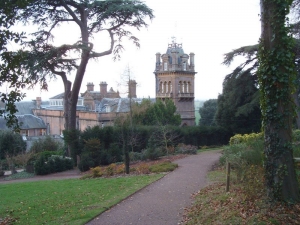 Open all year round, except Christmas Day.

Events, exhibitions:
Numerous, see www.hestercombe.com/whats-on/ to order online or call 01823 413 923 to speak to the box office.

Maps of sites/ visitor information etc:
Entrance include free guide map. Tours can be pre-booked at a cost of £7.70 per person.