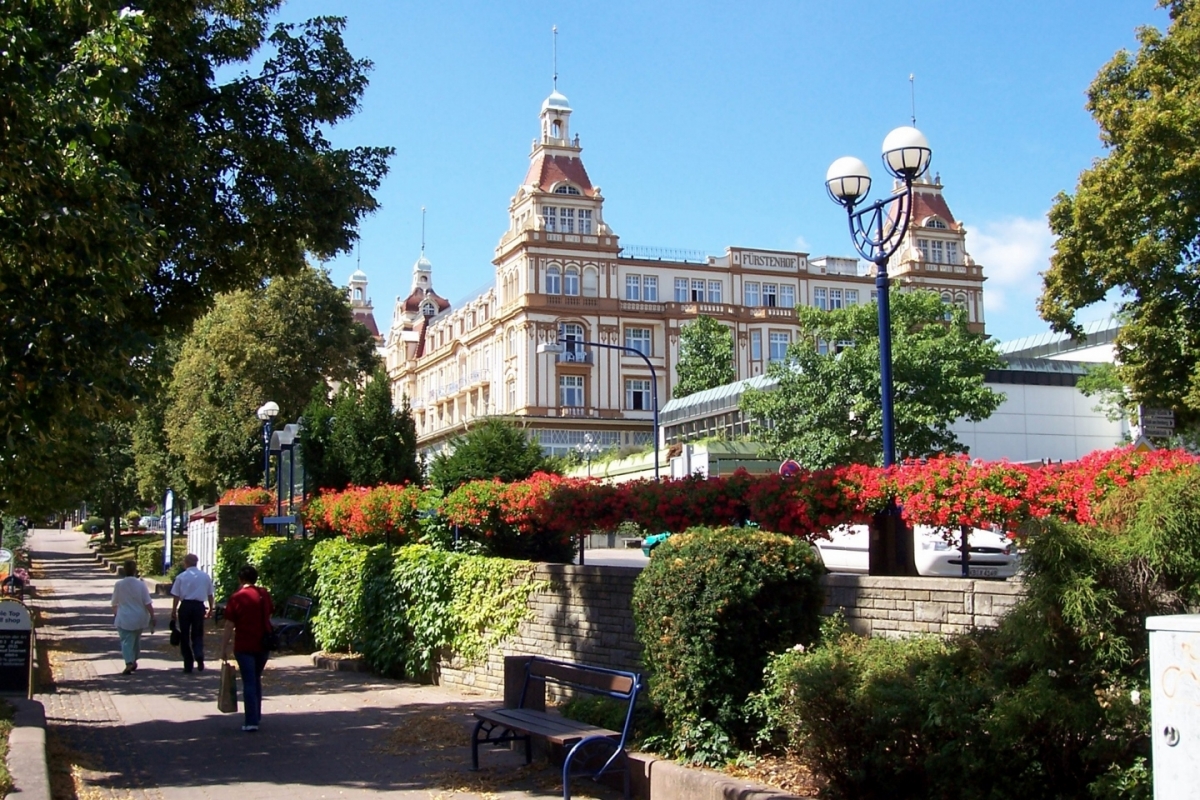 The historical spa park was extended on the occasion of the Regional Garden Show in 2006 to include a new area with a varied range of activities for relaxation and recreation, entertainment, games and sport. In addition, the old park was connected to two restored stream valleys so that a link was made to the old Königsquellenpark and its original well pavilion located below Schloss Friedrichstein. A continuous “green ribbon” now stretches from the railway station to the spa quarter of Reinhardshausen, forming a park which is beneficial to body, spirit and soul.

A number of horticultural and ecological elements as well as objets d’art from the Garden Show have been retained, so that visitors encounter a series of different attractions along the new main path from theKönigsquelle spring to the old park. The “Aqua Choros”, the “Golden Gardens” and the large “Sun Steps” with their charming view of the newly-created area in the valley and the hill with Schloss Friedrichstein at the top add a special new dimension to the park.

Spa guests have been coming to Wildungen since the 16th century. Initially, most of these were members of the nobility but later they came from all social classes. Among them were always many famous people. Lotte, the Grimm Brothers’ sister, took the waters here in 1818 accompanied by her brother Ludwig Emil. The rapid development of spa life at the end of the 19th century was accompanied by the creation of a spa quarter with prestigious buildings on both sides of the Brunnenallee to the west of the old town of Wildungen.

A spa park was laid out in an adjacent valley. The old well house, originally built for the Georg Viktor spring in the park, was replaced in 1890 by a cast-iron drinking and pump room typical of the period. The structure which replaced this in 1929 still forms the border between the park and the woods around it today. The building houses the Quellenmuseum (Spring Museum) and the “Quellendom” (“Spring Dome”). Water from the three main therapeutic springs is served in the latter, which is devoted to Wildungen’s therapeutic waters. The park boasts large areas of grass and an abundance of ever-changing flowers in ornamental borders along the main path as well as a striking variety of trees and shrubs from the time of its creation. Among these are exotic specimens such as a Japanese cypress, a Chinese necklace poplar, a ginkgo, a tulip tree and a giant sequoia of notable size.

The historical spa park stretches as far as the Maritim Badehotel and the old concert shell above the“Fackelteich” pond. The generously proportioned “Sun Steps” which form the transition to the grounds of the Regional Garden Show of 2006 start on the other side of the street here. Conceived as a flight of steps and ramp framed by hawthorn hedges and ever-changing displays of flowers, this access point to the showgrounds gives visitors a view of the Bornebach stream valley below the spa quarter. The valley has been given back its original appearance through restoration and planting with native trees, shrubs and herbaceous perennials. This elongated area offers many different kinds of activities for spa guests and visitors of all ages and is connected to the spa quarter on higher ground by some footpaths.

Horticulture is used to express various aspects of content near the steps. The “Garden Forum” presents gardens with various themes, featuring a farm garden, shadow garden, smell garden and motif garden, while the “Golden Gardens” are a reminder of the heyday of the spa resort during the period around 1900. Seven large pots with gold tiles stand at a supporting wall and relate to seven salons and chambers enclosed by privet and hornbeam hedges. These areas are planted with herbaceous perennials, trees and shrubs bearing yellow blossoms and fruits. The four human characteristics of virtue, lust, leisure and vanity as well as the great themes of transience, mortality, eternity and return are presented symbolically here using specific plants and various objects.

A little further along are the “experience gardens”, which are likewise surrounded by hedges and addresses the five senses – hearing, sight, smell, taste and touch. Especially selected materials and plants here are designed to encourage relaxation and wellbeing as important elements for good health.

A broad new tunnel painted an intense blue was constructed not far from where the Bornebach flows into the Wilde river. This “Quellentunnel” cuts through the “Riesendamm” (built in the 19th century for a street) and provides a spacious new link to the Königsquellenpark. The area beneath the hill with Schloss Friedrichstein broadens out here to form a floodplain landscape with a typical wetland biotope and a characteristic marshland wood. Visitors can get close to this piece of “pure floodplain” without getting their feet wet by walking along a large boardwalk.

The small park’s straight paths, attractive old stock of trees and octagonal pavilion over the Königsquellespring, discovered in 1869, form a contrast to the natural stream landscape. Water, its health-related qualities and its aesthetic characteristics and charms come into play in the “Aqua Chorus”, which was created at the east entrance of the Königsquellenpark for the Garden Show. The maze-shaped basin with its various water features is designed for therapeutic water wading. It is surrounded by regular geometrical lawns and herbaceous borders and adds a special dimension to this part of the park. 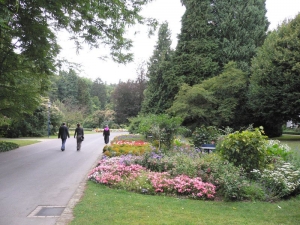 Events: Current information on events and the cultural programme can be found on www.bad-wildungen.de