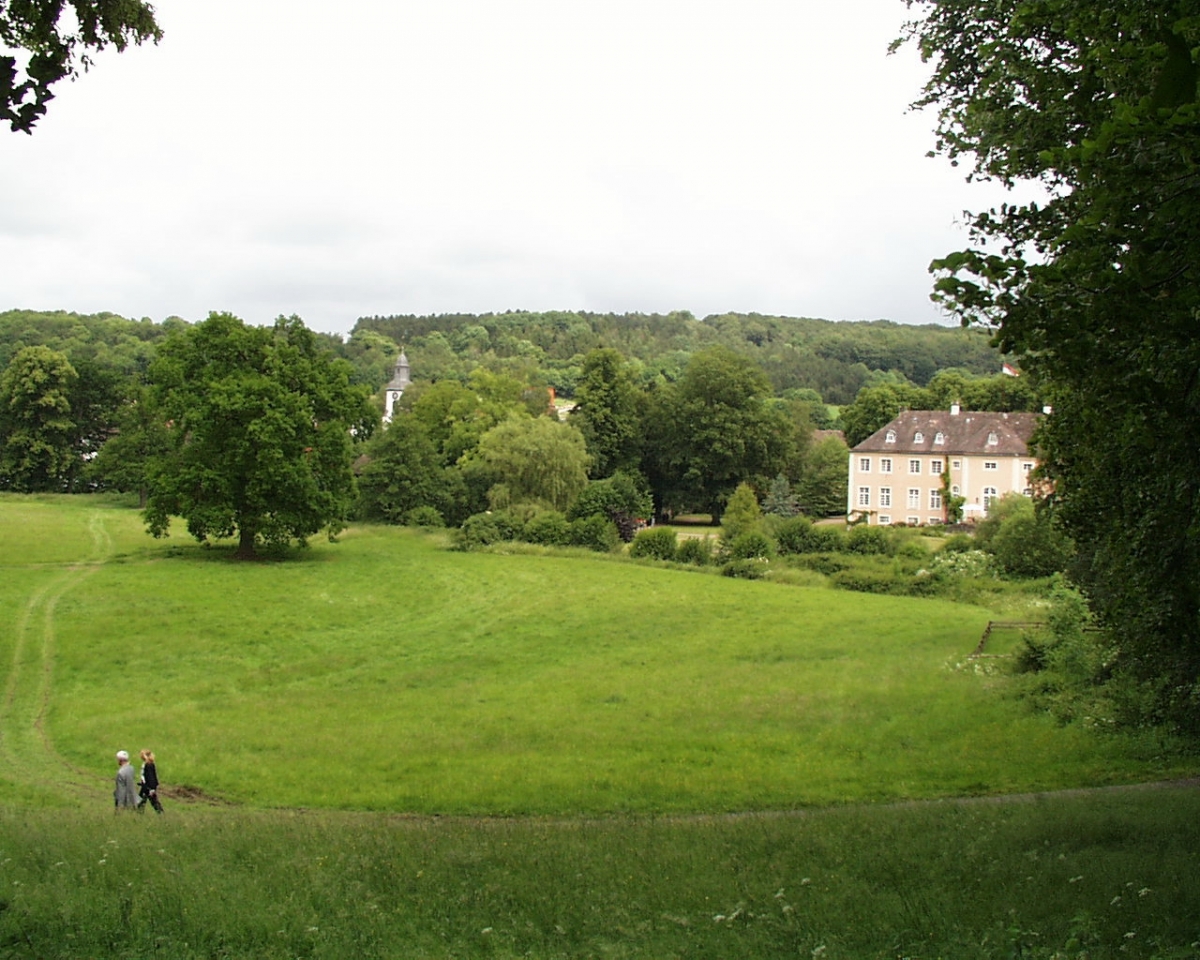 Following the garden theories of Prince Pückler-Muskau, Count Joseph Bruno von Mengersen created an approximately 70-hectare “classical” landscaped garden from about 1838 onwards. Rather than using non-native trees and shrubs, he took various broad-leafed trees and conifers to “paint” the park in various shades of green.

The same purpose is served by paths and viewing points which lead the visitor to highlights in the park’s design. Among these are the “Pückler-Schlag”, a line of sight which runs from the castle to the Sieseberg on the other side. From the mountain there is a view over the river valley and the village with the Katharinenkirche (St Catherine’s Church). This church from 1718 is regarded as an early work by the famous Westphalian master builder Schlaun and is located near the Katharinenbrücke (St Catherine’s Bridge). Original elements of the landscape park include the romantic stone bridge with an artificial spring and the lake island with the statue of the Madonna.

Even before the plants come into leaf, spring flowering plants such as anemones and larkspur bathe the forest floor in a sea of flowers.

Bruno von Mengersen used the natural features of the landscape so cleverly that the park is still like a romantic landscape painting today.

The knights of Brake died out in 1384 and the episcopal sovereign in Paderborn gave the knights’ property to the von Mengersen family. Three hundred years later, in 1686, they were granted the privilege of brewing and selling beer. Since then beer has been produced commercially in the family owned brewery. The family von Mengersen zu Rheder’s male line died out in 1873 with the death of Joseph Bruno, after which the property was inherited by the family Spiegel von und zu Peckelsheim.

In 1716, Buchardus Bruno Baron von Mengersen commissioned the master builders of Corfey, Pictorius and young Conrad Schlaun, to erect a moated outer castle, a baroque-yellow building, impressive for both its length and octagonal pavilions.

The castle itself was built in 1750 on the initiative of Franz Joseph Baron von Mengersen and his wife Antoinette Baronesse Spiegel zum Desenberg. The plain rose-coloured two-storey manor house, built over three wings, has a hip roof with chimneys and dormers, the roof-covering made of Wesersandstein” stone slabs [special sandstone from western Germany]. The interior contains (or “boasts”) sumptuous and delightful rococo fixtures and fittings. Toward the end of the heyday of the baroque garden, his wife Antoinette created the first landscape garden. Her grandson Joseph Bruno Duke von Mengersen (1804-1873), an art-lover, travelled extensively through Europe. But it was during his stay at Zscheplin, the family property, that he is likely to have become acquainted with Prince von Pückler-Muskau’s ideas on garden design. The Prince’s famous book Andeutungen über Landschaftsgärtnerei” [Hints on Landscape Gardening], written in 1834, inspired the Count to change the park into a classical landscape garden. Beginning his creation in 1838 he succeeded in enlarging the park (up to 70ha = 173 acres) and by removing all the decorative buildings. In accordance with Pückler’s ideas, Joseph renounced the use of exotic plants and by planting different varieties of deciduous trees and conifers achieved the effect of an atmospheric painting in multiple shades of green. New curved paths led to beautiful views and creative highlights. Still today the so-called Pückler-Schlag”, a vista extending over the Sieseberg slope, permits an unobstructed view to the castle.

Since 1949 the park with its centuries old oaks and beeches has been a nature reserve. Though the park is now smaller in size its deceptive appearance as a series of painted views is still enchanting.

To the south of the grounds visitors can still discover the outlines of the former ice ponds, which provided the ice for the beer-cellars. Passing the converted watermill and the castle-like fermentation and storage cellar visitors can walk up the Sieseberg and from here look over the beautiful river dale and the village with its baroque church of St. Catherine. Before the first green shoots of Spring, the woodland presents a delightful carpet of early flowers, among them bird-in-a-bush and wood anemone.

The romantic stone bridge, apparently the source of a spring, dates back to Count von Mengersen’s time. In fact the spring is fed by the subterraneous River Nethe and supplies both ponds with water. The island with a Madonna statue is a habitat for geese.

On the picturesque circular walk through the River Nethe’s water-meadow, visitors can clearly see how the resourceful Duke Bruno used the natural scenery for shaping his park. The magnificent prospect with grazing sheep still gives the impression of a romantic painting. At the end of the circular walk the visitor reaches Catherine’s bridge close to the church (built in 1718), an early work of the famous Westphalian baroque master builder Schlaun.

The idyllic ensemble of castle, brewery buildings, landscape park with meadows and trees and the wooded hillside is like a romantic landscape painting. Today the park is still characterised by its impressive unspoiled state, which American artist Jenny Holzer responded to harmoniously in her work here in 2003. And yet the more than thirty texts by Holzer and Henry Cole which are worked into partly rotting tree trunks are anything but comforting and gentle. They appeal to our moral understanding and can be found along the paths and in the undergrowth

On 6th September 2003 there was an additional light projection into the park’s attractive line of sight, the “Pückler-Schlag.” Art and nature appeared here in perfect symbiosis. Jenny Holzer’s tree trunks will remain in Rheder Park until 2009.

From yellow to pink to green: Rheder castle, which was built by Johann Conrad Schlaun in 1727, lies behind the long forecastle building. Standing in the richly-decorated, octagonal rococo room, one has a view over the broad meadowed valley of the Nethe and the wooded Sieseberg.

“Nature offered a lot to the creator of the park with the grouping of the valley and hills, and particularly the richness of magnificent woodland vegetation, with these mighty old oaks and beeches with broad stretching branches” wrote Levin Schücking and Ferdinand Freiligrath in 1872 in “Picturesque and Romantic Westphalia”, “but one must admit that only a rare taste and a profound, truly poetic understanding of landscape beauty could arrange these groups of trees like this, could create these delightful paths through woods and lawns, could design this whole world of flowers and foliage in this way.” The artistic spirit of Count Joseph Bruno von Mengersen and his wife Charlotte, who had skilfully-executed murals painted on the rooms of the castle, has remained in Rheder to the present day. Count von Mengersen was chief steward of King Jerome Bonaparte’s wife and became acquainted with important gardens and parks on his journeys to Italy, France, Switzerland and Hungary as a young nobleman.

Landscapes are permeated by memories of their history. The sensuousness and flight into the pastoral which can be found in poetry and music celebrating the countryside represent the rococo side of the Baroque. The other face of that period shows melancholy and death as a celebration of transience. Christian Brückner, Claudia Mischke, Michael Altmann, Yoko Tavada and Durs Grünbein read and spoke of becoming and passing away in nature, of the cycles of coming and going to which humans are bound. Both love of the beauty of nature and horror at its reality were expressed poetically. Inner and outer nature with its gentleness and violence, its extremes, was reflected in music

Events for children and young people:

How to get there by car: