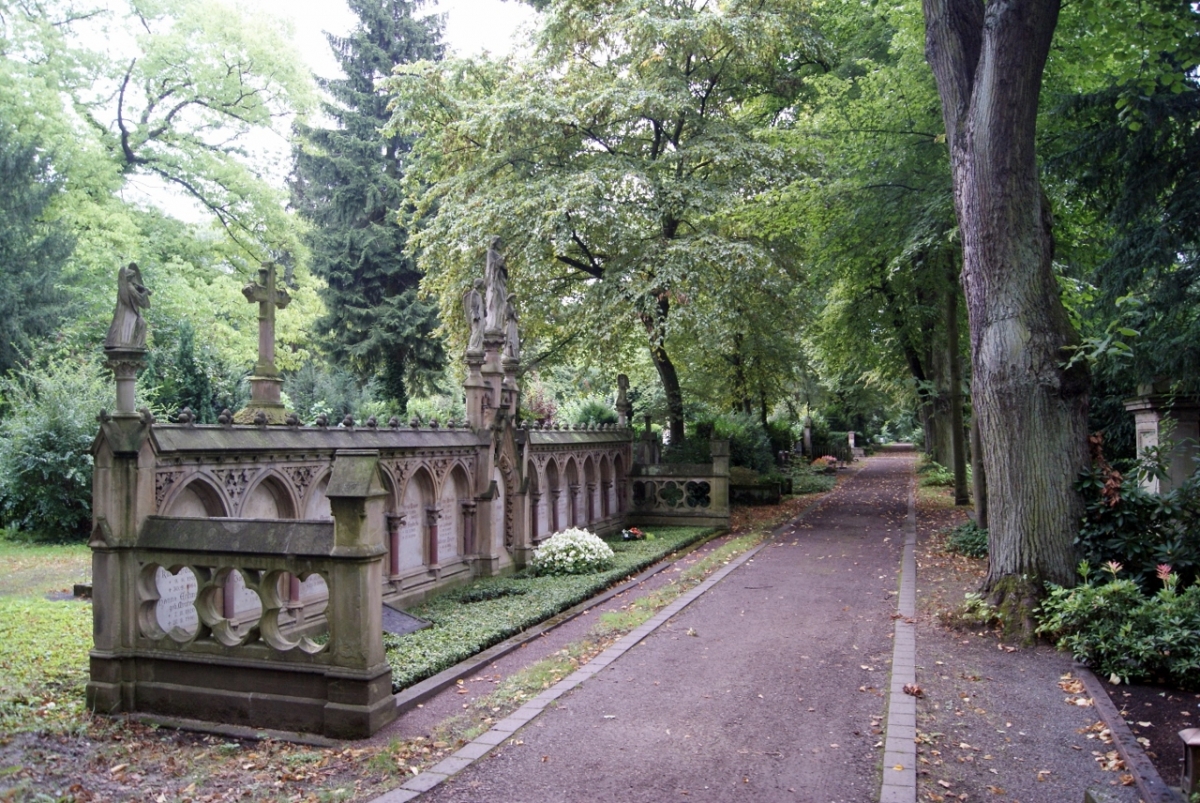 In 1810, the Melaten cemetery in west Cologne was inaugurated. During the 19th century the new cemetery developed into the most important burial ground in Cologne and had to be extended several times. The design was in keeping with a classical style. The graves were arranged in a grid pattern and the paths ran parallel and at a right angle. Even today, the way the graves are arranged reflects a piece of social history. The main paths were reserved for the wealthy and therefore were coined the “millions alleys”. The graves there not only include important works of art but also convey a lot about the history of the emerging economic metropolis in the 19th century and also about its actors.

More recently, the numerous old trees have made the Melaten cemetery an inner-city green retreat.

In 1810, a Napoleon decree stipulated that the Melaten cemetery was to be built outside the former city walls of Cologne. However, the history of Melaten is much older. Before the cemetery was erected the compound housed a lepers’ house, in those days called Maladen (sick/outcasts/lepers), which was first recorded in 1180.

The old cemeteries in Cologne were purely functional facilities and not subject to (horticultural) artistic ideas. The creation of the large cemeteries in the 19th century, however, made systematic planning necessary and this also included garden design. The Melaten cemetery in Cologne belongs to the typical examples for classicist cemetery design. A characteristic feature of this style is a regular grid-shaped arrangement of the graves.

In 1826, the garden artist Maximilian Friedrich Weyhe from Düsseldorf designed a planting plan for theMelaten cemetery which was only partially implemented. Due to the fast growth of the city, the graveyard had to be enlarged several times. In the process, the regular pattern was usually adhered to, although more modern designs were also influential. A further thought was that after its closure the cemetery would be converted into a park.

Coming from the Aachenerstrasse, two main paths lead through monumental gates into the graveyard. The path structure is formed by the two main paths and the alley running at a right angle to them with the elaborately designed gravestones which gave it its name “millions alley”. The intersections are emphasized by war memorials or circular-shaped lawns.

The many ancient trees with plane trees, maples, birch trees, elm trees and thuja trees dominate the grounds. A very special element is the thuja alley with Thuja gigantea. At the time the different trees were chosen in order to reflect life and ascension.

The importance of Melaten as a garden monument originates in its development during the 19th century when a gradual change in attitude led to cemeteries not only being seen as a place to bury the dead but also as an additional urban recuperation area with its own aesthetic qualities which were integrated in the garden design.

Apart from the value for city and also family history that the conserved ensemble of graves from the 19th and 20th century has, the artistic level of the mausoleums is outstanding. Next to works of famous Cologne sculptors, such as J. Mannebach, P.J. Imhoff and C. Mohr, there are numerous valuable works of art by artists who got there training at the Academy of Arts in Berlin and Düsseldorf, for example, H. Lederer, K. Janssen and D. Meinardus.

With the help of the memorials built to honour the personalities buried in the cemetery, the visitor can trace more than one and half centuries of Cologne’s city history. A special characteristic of the Melaten as a cemetery of the 19th century in the Rhineland is that it is a mirror of the emerging economic metropolis as well as a reflection of the established bourgeois. Thus the visitor can find the grave of Maria Clementine Martin, the nun with the Melissengeist (melissa spirits), or the grave of the family Farina with the inventor of the Eau de Cologne. 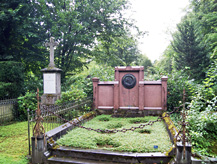 Further Informationen on the park:
Map: Map on site (information boards)
Labelling of plants: no
Seats and benches: yes
Accessibility: Main paths are fully accessible
Dogs: Dogs must be kept on leash