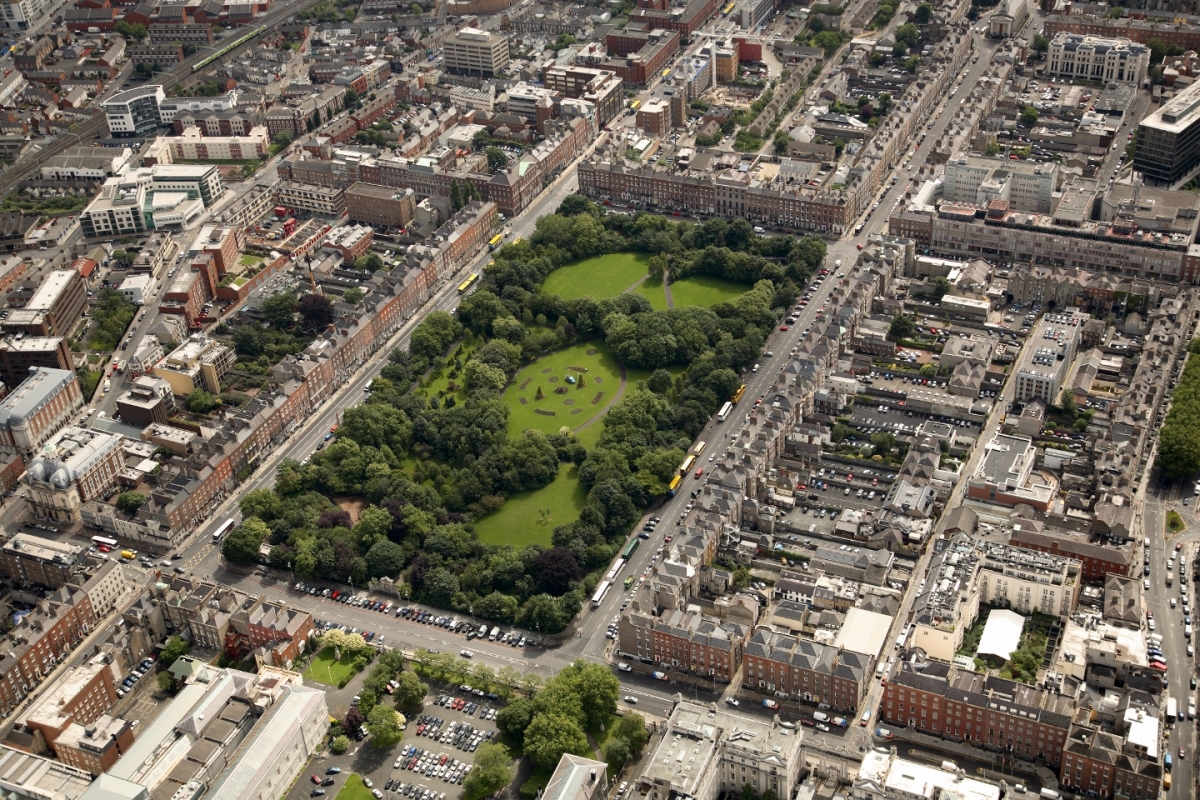 Merrion Square Park is situated on the south side of Dublin City centre and is considered one of the City’s finest Georgian squares.

Construction of the Georgian houses that provide the adjacent urban perimeter of the park began in the 1760’s. The park was originally private, open only to residents of the Georgian square. The land has since been leased to Dublin City Council.

The uniqueness of the park lies in the fact that it is no longer the preserve of the privileged local key holders. The park now is open to all and provides a really well maintained public open space, which caters for all ages. It is a great example of how old and new can be complementary and of the successful adaptation of a typical Georgian Square to modern intensive use as a public amenity. A visitor to the park will enjoy a 4.8 hectare sanctuary away from the hustle of city life. The original structural planting is now enhanced by additional shrub borders and by seasonal display of colourful bedding plants and spring bulbs. The park also hosts an interesting array of sculpture, a collection of gas lamps of old Dublin and a children playground as well as a colourful array of plants.

The sixth Lord Fitzwilliam, on whose land Merrion Square was constructed, engaged John Ensor, an assistant of Richard Cassels to devise a layout for the square. Implementation of the plan was influenced by the aims of the Wide Street Commissioners and Merrion Square became Dublin’s second largest square after St. Stephens Green with a total area of 4.8 hectares comparing favourably to most gracious squares in London.

The earliest plan of the park shows a double line of trees around the perimeter. This boundary was reinforced by the construction of railings in the early part of the 19th Century which supported 127 lamps, on a low granite wall. A “Jardin anglais” approach was adopted and that basic design structure has been retained to the present day.

When the park came into the hands of Dublin City Council in 1974 from the then Archbishop of Dublin Dr. Ryan, it was in a very poor neglected state. It had lain uncared for as it was the proposed site for a new Dublin Cathedral that was never built. After the death of Archbishop Ryan the park was renamed Archbishop Ryan Park to honour his generosity. In order to provide a functional space for the people of Dublin a new park layout was put in place to increase its amenity value. To this aim understory planting around the existing parkland trees took place and the park was broken up into loosely three lawns which contain bedding displays, bulb planting and a heather garden. All the additions have been organic in nature and little to no hard landscaping was put in place to distract from its original Georgian heritage.

The park hosts an interesting collection of sculpture as well as the Rutland Memorial which faces Leinster House, the Irish house of parliament, at the west of the Square and was designed by HA Faker in 1790 as a memorial to the Duke and Duchess of Rutland. The curiously shaped grassed mound in the southeast lawn is the remains of trench-type underground air raid shelter which was constructed in the 1939-45 War to provide overnight accommodation for 1100 people. The Heather Garden that lies to the northern side of the square close to the children’s playground is a relatively recent addition to the park which now provides year round colour. The park is also home to a collection of old Dublin gas lamps that have been restored and now provide examples of public lighting from the last 100 years. The sets of cobble stones which edge the paths are relics of old Dublin.

One of the major reasons that Merrion Square Park is so successful is its location in the heart of the city and surrounded by buildings of historical interest, which include both houses of the Government the Seanad (Senate) and the Dail (the First House of Parliament) which are accommodated in Leinster House. To the west of the park is also the Natural History Museum, itself a Victorian relic opened in 1857. Over the years, Merrion Square was home or work place to many well known residents; Oscar Wilde, the poet and playwright (No1), Daniel O’Connell who secured Catholic emancipation for Ireland (No85); WB Yeats, poet and playwright (No82); George Russell (AE), poet and painter (No84), to mention but a few.

Merrion Square Park is a great example of the old meets new and the park, once the preserve of the privileged, now offers attractions for all ages. 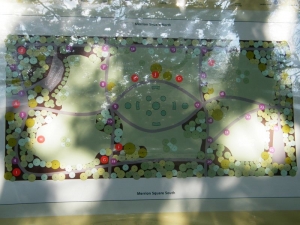