You Are Here:Home / European Themes / Monserrate 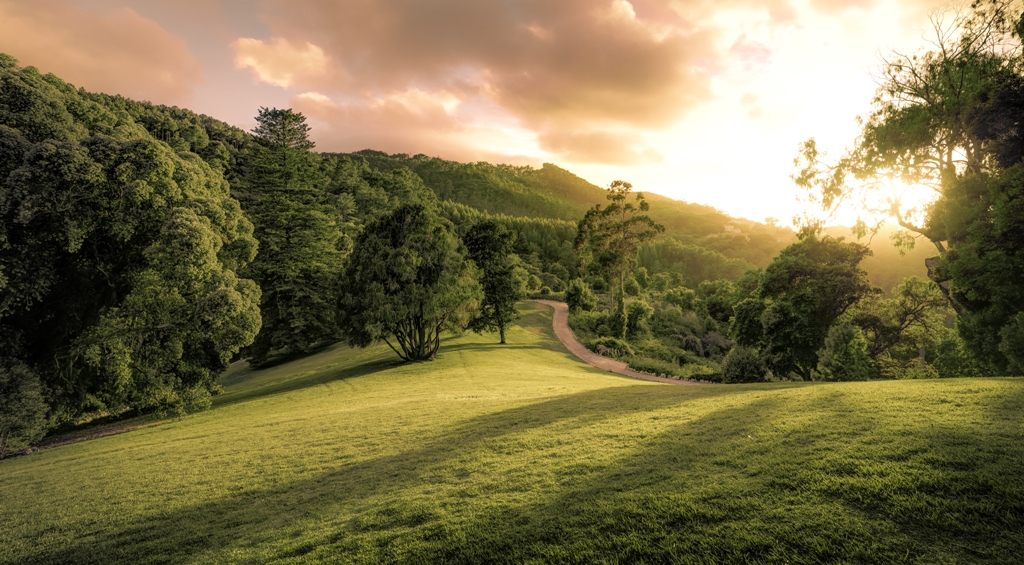 Monserrate is one of a group of historic gardens, royal palaces, and other heritage sites managed by Parques de Sintra. It is located some four kilometres from the historic town centre of Sintra. At its centre stands the Palácio an extravagant Victorian showplace built by Sir Francis Cook, Visconde de Monserrate. Surrounding the house are extensive landscape gardens which, though they date back to the late eighteenth century, have been continuously developed and are now undergoing a process of revival and renewal. Woodlands and mountain scenery envelop the gardens and provide splendid views.

The gardens contain a rich botanical collection of sub-tropical and temperate plants, brought from all corners of the globe. The climate of Sintra is one of the mildest in Europe, which combined with fertile granite soils and gentle Atlantic rains enable the cultivation of palms and giant flowering trees not easily found in any other garden on the continent: varied microclimates enable an enormous variety of plants. This combined with a rich and fascinating history has made Monserrate an obligatory destination for visitors to Sintra for over two hundred years.

Monserrate is located on the green fertile north-facing slopes of the Serra de Sintra. The site has been occupied since the Moorish times; selected by its many inhabitants for the superb placement on a ridge that offers commanding views of the surrounding landscape. The garden was laid out in the eighteenth century as a landscape park. A taste for sublime scenery at this time is well evidenced by the magnificent cascade and surrounding rockwork that survives from this date. Other eighteenth century features include a ruined folly, known today as the “chapel” and the “Roman arch.” But the lasting heritage of Picturesque Monserrate has been the layout of paths and stairways that conduct the visitor around the estate. A carefully orchestrated series of views offers surprises at every turn.

In the mid-nineteenth century the garden was redeveloped as a botanical spectacle. It showcased the rare and exotic plants flooding into Europe from the newly-explored continents of South America and Australia. In fact plants were brought from all over the world and planted in groups of geographical origin. Romantic Monserrate, as created by Sir Francis Cook, was conceived as a vast open-air greenhouse: filled with plant collections that rivalled the palms, tree ferns and cycads contained by the crystal palaces of botanic gardens in London, Frankfurt and Paris. Today the garden of Mexico, dating from the 1860s, recalls this enthusiasm and celebrates the weird and wonderful flora of the desert regions of Central America. Newly rebuilt and planted with cacti, yuccas and agaves, there are also bright coloured flowers of Mexican origin. At the centre of this garden, in a sheltered warm valley, lies the Tropical Garden with palms, pandanus, cycads, and a pond full of Lotus and Taro. .

The Tree Fern Valley is another of Francis Cook’s legacies currently under reconstruction. A deep humid dell crossed by a network of paths between steeply terraced slopes, the garden has been replanted with hundreds of Australian tree ferns that will soon rival the original Victorian display. Flowering plants such as begonias, primulas and botanical species of fuchsia, that were also grown in this garden, have been reintroduced along with ground cover ferns, clivias and bromeliads.

In March 2011 a new Rose Garden was inaugurated by HRH The Prince of Wales and HRH the Duchess of Cornwall. This garden, which occupies 5000 square metres in its historic location, contains many varieties of old roses which are particularly suitable for cultivation in mild climates: teas, noisettes, china and species roses. A particular speciality are the hybrids of ‘Rosa gigantea’, a species from the Himalayas which can climb 30 metres into trees. The first rose of this class, ‘La Belle Portugaise’ was raised in Lisbon in 1910. When the roses are in full bloom, during the months of April and May, their fragrance is carried by sea breezes throughout the garden.

At the base of the great lawn, that descends from the house, are a series of newly restored cascades and ornamental lily ponds that form the focus of the view from the terraces. In the summer a stage is mounted over the water and the lawns are adapted as a picnic theatre for concerts and other events. Around the lawn there are many giant trees from the original nineteenth-century plantings, including a number that are of champion dimensions: an Araucaria nearly 50 metres high is the tallest tree in the garden, several Metrosideros trees are almost as big as the house and provide a spectacular sight when covered with red flowers in June.

The Moorish origins of the site inspired not only the architecture of the house, but also a number of garden features; there are fountains decorated with azulejos, painted tiles, and the original irrigation system is decorated with Andalusian brickwork. Water runs throughout the garden in channels and along the tops of walls. The lawn, the oldest irrigated turf in the Iberian peninsula, was supplied by artificial springs, traces of which can still be discerned.

The gardens at Monserrate are managed with an integrated approach combining horticultural expertise with nature conservation which provides a rich habitat for local flora and fauna. The bird life is particularly interesting and has increased as areas of invasive forest trees have been removed and open spaces have been created. In this way the botanical collections of exotic plants are matched by an increasing diversity of local species.

Monserrate forms part of the Cultural Landscape of Sintra inscribed on the UNESCO World Heritage List since 1995, as such it is considered as a Portuguese National Monument (since 2001). 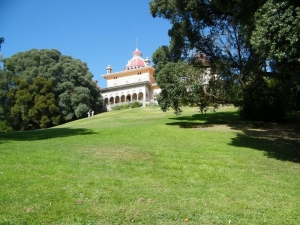 Open every day except 1 January & 25 December