You Are Here:Home / European Themes / Nordpark Düsseldorf – Garden Design of the 1930s 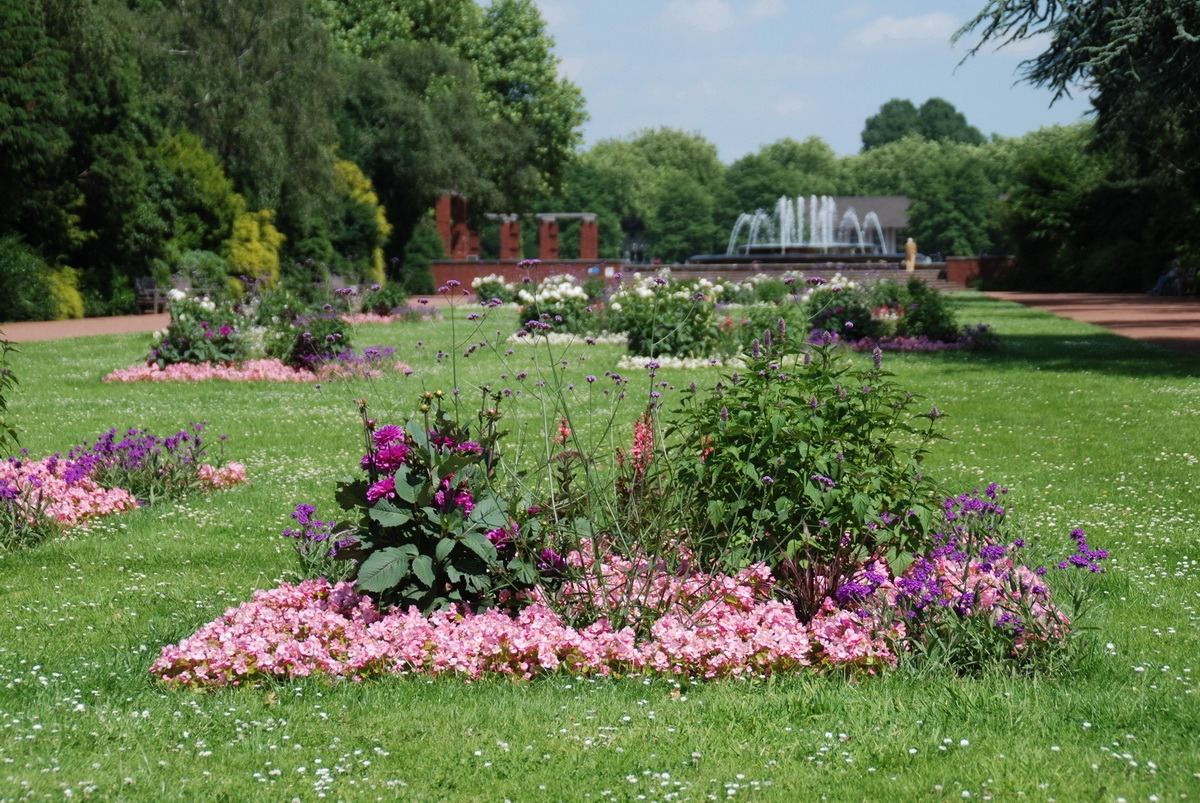 Visitors to the Nordpark today associate it with its large axis of water, the Japanese Garden, the Aquazoo and the cheerful touches of colour provided by its opulent ornamental blossoms.

The Nordpark was created in 1937 as part of the “Große Reichsausstellung Schaffendes Volk” (“Great Imperial Exhibition of Productive People”) and is an important example of garden architecture in the 1930s. Its underlying structure is formed by long symmetrical lines subdivided by cross-axes and landscaped garden areas.

New elements and a diverse range of activities for outdoor relaxation were added to the park after the war while its overall concept was retained.

A visit to the park begins at the impressive garden axis, which starts at the fountain with its jets of water, cascade basin and sophisticated flowerbeds, continuing along the flower axis with its scatterings of summer flowers, and ending at the profusely planted flower ring. This guides the visitor further into the rear areas of the park like a turnstile.

The Nordpark was particularly enhanced in 1975 when the Japanese community gave the people of Düsseldorf a gift of the “Japanese Garden on the Rhine”. A garden with a waterfall, pond, picturesque rocks, azaleas, Japanese maples and trimmed pines was created on 5000 m2 in accordance with plans drawn up by landscape architects Iwakii Ishiguro & Son / Tokyo.

Today, many areas of the Nordpark look the same as they did in 1937, when it was created on the basis of plans by Willi Tapp, the Director of the Düsseldorf Gardens Department at that time.

A visit to today’s Nordpark begins with the long garden axis, which was known as the “Great Garden” in 1937. The water features consist of a 170 metre water axis, the jets on either side of which literally create a water tunnel. A large flowerbed which is richly planted with spring and summer flowers can be found in front of the fountain. This part of the park is surrounded by a four-metre-high hedge of hornbeam.

The so-called “Ständische” sculptures were erected on either side of the water axis. Some of the 12 standing figures can still be found in their original positions today.

Flights of steps on either side of the water basin lead to the slightly raised fountain area. The large fountain basin is made of shell limestone and measures 35 x 35 metres. Mighty plane trees stand at the outer corners of the rectangular fountain area, which is surrounded by four pergolas with climbing plants.

The ballroom building is located on the left. While it originally served as a garden pavilion, it is used today for visiting art exhibitions.

The dance ring, a circular area of lawn surrounded by five steps, can be found behind the ballroom building. The steps are planted with summer flowers every year. During the Reichsausstellung, the ring was used to present folk dances and also served as a kind of open-air theatre. Twenty tall hornbeams trimmed into cone shapes stand on the lawn surrounding the dance ring.

A side path leads the visitor back to the garden axis, which continues below the fountain area. Today, the flower axis is formed by numerous flowerbeds embedded in groups in the long stretch of lawn. These flowerbeds are also planted with annuals in spring and summer.

The end of the garden axis is marked by the flower ring, a sloped circular group of flowerbeds which are regularly replanted. A kinetic sculpture by George Rickey stands at its centre. From here the visitor arrives at the large cedar lawn with about twenty impressive Atlas cedars. Several weeping willows form a very beautiful contrast to the dark cedars.

Visitors find a special kind of garden jewel in the northwest corner of the Nordpark, where it is at its quietest and most serene: the “Japanese Garden on the Rhine”. An association founded by Japanese companies and the Japanese community in Düsseldorf gave the garden to the population of Düsseldorf as a sign of their special bond in 1975. Some of the particularly striking elements from the Far East immediately become apparent on entering the 5,000 square-metre garden. A loop path guides visitors through the garden. The landing stage calls to mind memories of boat trips. The trees – mostly pines and Japanese maple – are trimmed in a special manner.

Opposite the Japanese Garden is the cactus and summer garden. Both special gardens were created by Georg Penker in 1958 and reflect design practice of the 1950s in their asymmetrical forms, curved lines and flowing transitions conveying transparency and lightness.

Passing a pedestrian bridge, which was built in 1971, the visitor reaches the park exit and then arrives directly at the Rhine. The main path guides the visitor further along to a terrace with pergolas. The sculpture “Die Sitzende” by Johannes Knubel (1877-1949) can be found here.

The visitor then reaches the water garden, which has survived almost unchanged since the Reichsausstellung and which is framed by a pergola made of natural stone. Profuse wisteria climbs up the pillars, its blossoms and the perennials on either side of the entrances to the water garden creating a harmonious scene of colour. A large pool with water lilies can be found at the centre.

The path leading from the water garden runs along a restored avenue of 102 Lombardy poplars as far as the Löbbecke Museum and the Aquazoo. The semicircular terrace behind the Aquazoo and the flight of steps which leads to the avenue axis have survived from the park which was created in 1920. 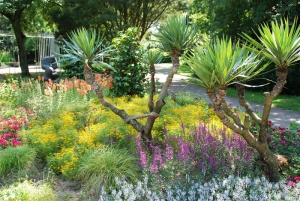 Map / visitor information: A map as download here:  PDF. There are also information boards in the park.