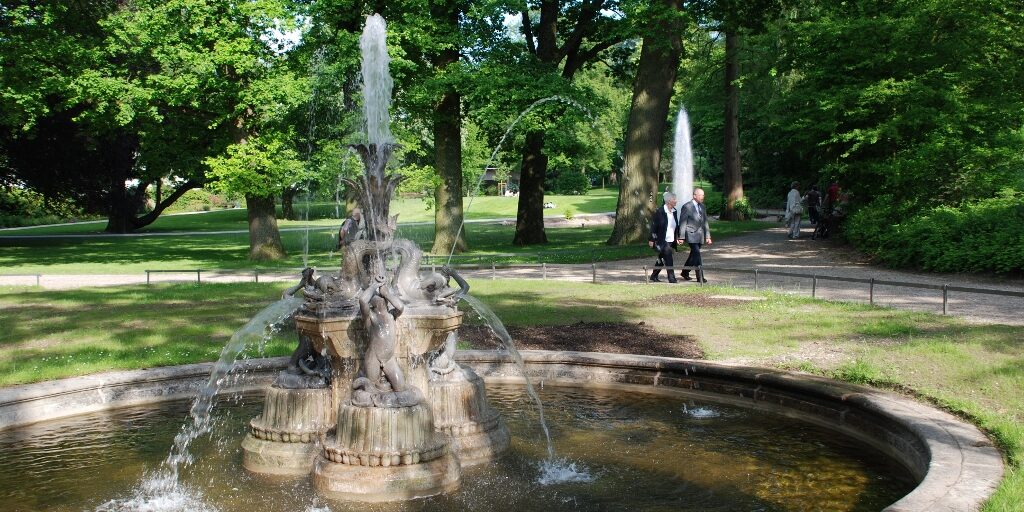 The large landscape park covers an area of 7.5 hectares and was created in 1851 at the Neues Palais (now the Academy of Music) of the princely House of Lippe. The park emerged from the redesign of what was originally a 2.4 hectare Baroque garden surrounded by a high wall in the style of a “hortus conclusus”. Parts of a wildlife park were included and sweeping meadows in varying forms were created and planted with non-native shrubs and plants. Several striking tree circles, among them the “12 apostles”, are typical features of the park.

The fountains and water features form one of the biggest attractions. They were constructed from 1851 to 1858 and are all still in working order. Among them are the oval pool with the large fountain, the “small cascade” and “great cascade”. The latter two are made from large stone blocks. The frog fountain, dolphin fountain and swan pond feature ornamental figures of these animals.

In 1918, the garden was opened to the public. The choir and orchestra building of the Academy of Music was built from 1965 – 68 in the south part of the park. The garden in this area was redesigned on the basis of plans drawn up by the eminent garden architect Professor Hermann Mattern.

Covering an area of approximately 7.5 hectares, the Palaisgarten in Detmold is one of the outstanding historical parks in Ostwestfalen-Lippe. It was designed as an English landscape park and the features of it which still survive today illustrate developments and changes in garden design over a period of more than 300 years. The park was attached to the “pleasure house” of Count Friedrich Adolph zur Lippe, which was built from 1706 – 1718 and was at that time located outside the town gates. The Count made a gift of the “pleasure house” to his second wife Countess Amalia von Solms as a widow’s residence.

The approximately 2.4 hectare “Burggarten” is an intimate “hortus conclusus” (“enclosed garden”) surrounded by a high wall. This terraced Baroque garden was divided up by a symmetrical network of paths and featured a square parterre de broderie and a round pool with a fountain located close to the house. These were adjoined by regularly-spaced beds for plants and rectangular beds for cultivating vegetables and fruit. Any surplus garden produce was sold at the weekly market in Detmold.

In 1746, construction began on an enclosed wildlife park to the south of the walled Baroque garden, in the woods of the Büchenberg. Evidence from the time of its creation can still be seen in the form of the high surrounding stone wall in the north and east, the remains of the south outer wall near the “small cascade”, and the “stone table”. This table top weighing more than five tonnes was originally a step at the garden gate of the Baroque “pleasure house”.

Leopold III (1821 – 1875) chose the castle as his permanent residence and arranged for the Baroque garden to be redesigned as a landscape park in 1851. It has been known as the “Palaisgarten” since this process was completed in 1854. Parts of the wildlife park were included and large areas of meadows created in varying forms. These were planted with non-native shrubs and plants. Among the numerous broad-leaf trees and conifers which are of dendrological interest are above all various copper beeches and weeping beeches, walnut and American walnut trees, tulip-trees as well as cedars, some cryptomeria japonica, southern cypresses and two giant sequoias. The latter were brought here by Leopold III in 1858 following a trip to Italy. Several noticeable circular formations of oak trees and maples accentuate particular areas. The most striking group of trees can be found in the south-west. This is the “12 apostles”, a circle of old linden trees, eleven of which are grouped around a single tree is the centre. The visitor has a view from this idyllic spot either of the surrounding Lippe hills or the park with its huge giant sequoia at the “swan pond”.

The water features have been one of the biggest attractions in the park since their creation from 1851-1858. Among them are the oval pool with the large fountain as well as the “small cascade” and the “great cascade”, which are made from large stone blocks. The frog fountain, dolphin fountain and swan pond feature ornamental figures of these animals.

The nicest time of year in the park is the summer, when the water features and fountains are particularly enjoyed by visitors. But the park is also a popular spot in winter, when the children go sleighing on the Papenberg.

The machine house, which was erected in front of the southern entrance to the park in 1855, pumps water from the canal to a reservoir above the palace gardens. The fountains are supplied with water from here using natural pressure. To the right of the machine house there is a classicist stone portal dating from 1836. This was once the entrance to the castle cellar, which was used for storing ice. The portal is somewhat hidden from the visitor’s view.

Following the abdication of Leopold IV in 1918, the “Neue Palais” passed into the possession of the newly-founded state of Lippe and the garden was opened to the public. The building was used as a museum for a time before the Academy of Music took up residence here after the Second World War.

The choir and orchestra building of the Academy of Music in black slate in the south part of the park was erected from 1965 – 68. The garden was redesigned on the basis of plans drawn up by the eminent garden architect Professor Hermann Mattern.

Cultural Programme and Exhibitions:
Current information on the cultural programme can be found at www.stadtdetmold.de/505.0.html

How to get there:
Bus nos. 701 / 703 / 782 / 792 from Detmold railway station in the direction of Berlebeck/ Hiddesen/ Bad Meinberg/ Emmerstausee as far as Palaisgarten