You Are Here:Home / Gardens / Park Benrath 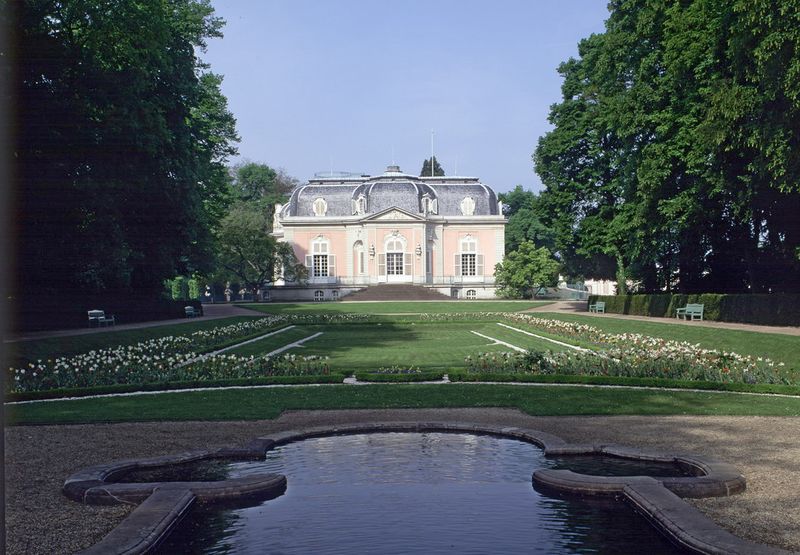 The ensemble of buildings at Schloss Benrath still presents itself today as a Gesamtkunstwerk, just as Nicolas de Pigage planned it to be in 1755. The palace, park and water features complement each other and form common points of reference. Thus, the palace rooms have corresponding garden areas, e.g. the mirror pool corresponds to the cupola hall and the English and French gardens to the private rooms of the electress and elector.

Nicolas de Pigage gave the park a strict geometrical structure with axial sections. The wildlife park was redesigned as a geometrically-structured hunting ground. Avenues still cut through the grounds today, forming a star shape and meeting in a circle.

The French garden in the east, also known as the electress’ garden, is enclosed by water cascades and structured by Baroque flowerbeds.

The elector’s garden in the west, an English garden “en miniature”, features a stock of rare trees. This garden is adjoined by a fifties-style garden area.

In front of the orangery there is a reconstructed Baroque-style garden, the parterres of which are grouped around a fountain.

The kitchen garden, which is surrounded by high brick walls, supplied the palace with vegetables in the 18th century. Espalier fruit, vegetables, herbs and flowers are now grown here again.

The various areas of the garden were extensively renewed, reconstructed and restored for the EUROGA 2002+ Dezentrale Landesgartenschau (Decentral Regional Garden Show).

Set in the middle of a large park and surrounded by water features, Schloss Benrath is a testimony to late-Baroque taste.

A combination of palace and park was planned as a Gesamtkunstwerk from the outset here, in accordance with a favourite concept of absolutist rulers. The “architectural oeuvre”, “garden oeuvre” and “water oeuvre” should be seen as a whole. They complement each other and form common points of reference. The palace rooms have corresponding garden areas.

The “pleasure house“ (corps de logis) was built for the Elector Carl Theodor von der Pfalz (1724 – 1799), who once invited members of the upper echelons of society to hunting parties here. Nicolas de Pigage (1723 – 1798), the court architect, designed the splendid corps de logis with its neighbouring buildings and large park. This master architect used all his skills when designing the palace in 18th century style.

The large park still stretches out to the south of the palace. It consists of various gardens which were created at different times.

The mirror pool forms the main axis to the palace and is 470 metres long. Its surface reflects the light, thus increasing the amount of it which enters the palace rooms. The palace is in turn reflected in the calm water when viewed from afar.

The terrace leading to the garden is ornamented with plants from southern Europe such as lemon trees and Seville orange trees, jasmine, oleanders, myrtles, and pomegranates. The orangery building in the Baroque garden was not the only place designated to bring exotic plants through the winter. Any place where the tender plants could be housed was used.

The east and west fan avenues consist of four rows of trees (allée double) around a carpet of lawn (tapis vert). The Dutch linden trees were cut in such a way that their branches spread out in a fan shape, forming a green wall.

To the east of the mirror pool is the orangery. It was part of the old moated castle and features an early-Baroque parterre. The French-style ornamental garden is a good illustration of the design of castle and palace gardens in the second half of the 17th century.

The kitchen garden or “potager” is separated from the other areas of the garden by a high wall with espalier fruit. It features a pattern of rectangular beds set around a fountain basin.

To the west of the mirror pool, a large star-shaped woodland and hunting park stretches out almost as far as the Rhine. A path snakes its way across the axes of the star. This winding path forked many times in the 18th century to form several twists and turns in the style of the “jardin chinois-anglais”, which incorporates influences of English landscape gardens and Chinese garden design.

The circular area at the centre of the straight axes is now a round lawn surrounded by a high ring-shaped hedge of cut linden trees.

The park is supplied with water by the Schlangenbach, a branch of the Itter stream.

There is a fine view over the Rhine landscape and back to the palace along the diagonal axis of the hunting star from the “Rheinkopf” hill, which functions as a “Belvedere” (viewing point). This area was surrounded by eight linden trees which remained uncut due to their location at the transition point to natural woodland.

Like the “Rheinkopf”, the “Ulmenkopf” on the main axis to the palace is also conceived as a “Belvedere” and viewing point.

Maximilian Friedrich Weyhe’s plans were used to transform the west part of the elector’s garden into an English landscape garden in 1807. In 1840, the east part was also changed in this way on the basis of Peter Joseph Lenné’s design. The water features and green areas were linked to form a stylish composition with a charming and varied design.

The garden of the electress has survived as a “French garden”. Several shallow basins form a terraced cascade which is supplied with water from the Itter canal. The water leaves the park at this point. There is a large parterre de pelouse surrounded by a border of flowers in front of the basins.

The large surface area of the pool in front of the palace initially distances the visitor from it. At the same time, however, the pool was formerly the link between the natural world in its untouched state and the park, signalling the palace to be an intimate place surrounded by gardens and nature.

The magical aura of the palace and its surroundings has frequently found its way into literature.

Parts of the park which are explained with exhibits and texts in the Museum für Europäische Gartenkunst(Museum of European Garden Design”) can be fully experienced and appreciated here in their “natural surroundings.”

The town of Düsseldorf gave the complete palace complex and the park protected status in 1996 and applied to have the palace and park listed as a UNESCO world heritage site. 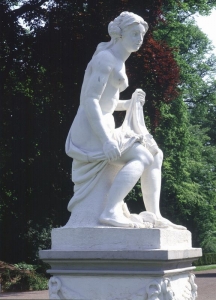 Opening Times:
Park and gardens are open all year, every day.

Cultural Programme and Exhibitions:
Current information on the cultural programme can be found on the website: www.schloss-benrath.de