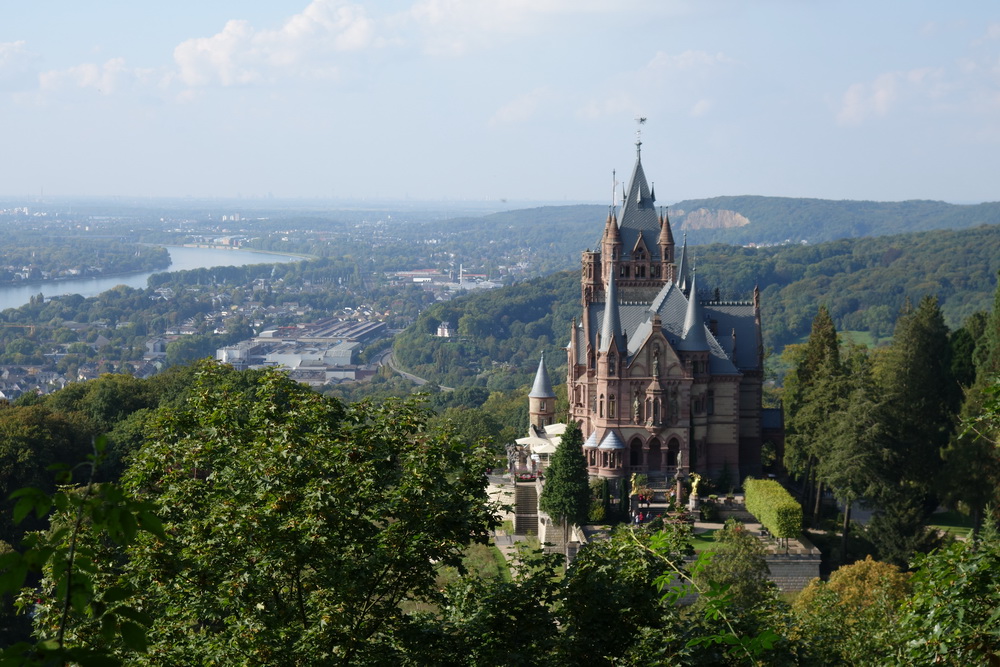 The park around Schloss Drachenburg, which stands approximately 150 metres above the Rhine valley, features terraces, a pleasure ground, a sloping meadow and a wood, making it a peaceful counterpoint to the stylistic variety of the castle’s architecture. The park was created in 1884 as a zoned landscape park and is regarded as a classic example of the late-landscape style of garden design.

Starting at the “pleasure ground”, which is located directly at the castle, the view opens out onto the Rhine valley and the surrounding cultural landscape. Looking at this panoramic view, it is easy to understand the 19th-century enthusiasm for Rhine romanticism.

A round ornamental flowerbed lies directly in front of the flight of steps. To the south, there is a Venus terrace with a small garden which echoes the pleasure and love gardens which were popular at the time. Here too there is a fantastic view over the Rhine valley.

A large sloping meadow planted with native deciduous trees and with pyramid poplars in its south section stretches out to the south of the Drachenburg. The whole garden is surrounded by a wall with an artistically-designed grille.

The park wood has a network of paths which lead to interesting attractions such as areas of landscape, natural features and elements of garden design. Amongst these are the Felsenmeer (“sea of rocks”) – a quarry dating from the time of the Romans, a 17-metre high lookout tower and a clearing with an obelisk.

After the castle and park were taken over by the NRW-Stiftung (North Rhine-Westphalian Foundation), the park was elaborately restored and a museum on the history of environmental conservation was established in the forecastle of the castle.

Schloss Drachenburg is set in an elevated position approximately 150 metres above the Rhine and is surrounded by a park. The castle is about half-way up the path leading to the Drachenfels ruin near Königswinter.

After the castle had been completed, work began on creating the approximately 10-hectare park. It was laid out at a time when there was an increasing tendency in garden design to incorporate regular and formal sections into gardens again after it had produced purely landscape-style gardens for almost 150 years. It is not known who designed the garden.

The park forms a peaceful counterpoint to the varied style of the castle’s architecture. The individual areas of the garden are arranged in such a way as to highlight above all the Drachenburg, which can be clearly seen from the Rhine valley.

The park and castle can be reached by following the drive which winds its way through the woods and along the side of the hill. This avenue-like drive is lined by horse chestnut trees. The first station is the forecastle, a two-storey three-wing building dating from 1883 with a hipped roof. There is a good view of the Drachenburg from this point. The hill around the castle can be reached by following a footpath.

This “pleasure ground” is the area of the garden with the most detailed design. In the 19th century, the area of the garden directly around the house was known as the “pleasure ground”. It contributed to the enhancement of the country residence and to the owner’s pleasure. Here there are areas of lawn with groups of shrubs which create interesting views to the castle and to the surrounding cultural landscape.

Apart from native trees such as spruces and firs, rare conifers grow here, amongst them cypress trees (chamaecyparis), pines, junipers, yews and arbor vitae. There is a round ornamental flowerbed directly in front of the flight of steps. Broad-leaved shrubs with striking colourful or silver foliage grow at the edges of the “pleasure ground”. The “pleasure ground” is bordered to the south by an avenue of elms and to the east by a row of shrubs which forms a transition to the wooded area of the park to the north.

The park wood has a stock of deciduous trees and a network of paths leading to interesting attractions such as areas of landscape, natural features and elements of garden design. The Felsenmeer, a large rock from which the ground drops away steeply for several metres, offers a good view of the surrounding rock massifs. Furthermore, there is a quarry dating from the time of the Romans along the path as well as a 17-metre-high lookout tower dating from 1884. A grove-like clearing with an obelisk also enhances the wood.

To the south of the Drachenburg is a large sloping meadow planted with a small number of groups of native deciduous trees. The whole park is enclosed by a wall with an artistically designed grille featuring neo-Gothic elements.

Schloss Drachenburg is surrounded by an extremely large terrace which is subdivided into a main terrace and a “Venus terrace” to the south. Paths and tall narrow conifers form a ribbon around the castle on the main terrace. The “Venus terrace” is dedicated to the Roman goddess of love and beauty. There is a small garden here which echoes the pleasure and love gardens which were popular at the time. A beautiful fountain stands in the centre of the lawn as a symbol of the source. Rows of cut linden trees screen the garden from the outside. The fountain is surrounded by a summer flowerbed. Visitors can enjoy the wonderful view down into the Rhine valley from the “Venus terrace”.

The park was created as a peaceful area in order to highlight the castle. To do this, the natural features were cultivated and enhanced. A further focus of the park was its highlighting of sweeping views across the Rhine valley.

The landscape park forms a harmonious transition from the castle to the picturesque Siebengebirge, Germany’s oldest nature reserve. At the same time, the romantic ensemble and its historical emphasis function as a prelude to the castles on the Middle Rhine in their romantic settings.

The park at Schloss Drachenburg has an outstanding and precious stock of trees. Not only are numerous trees extremely old, the stock also includes numerous specimens placed under special protection as well as dendrological rarities from all over the world. Many trees date back to the time when the garden was created. They are thus approximately 120 years old and part of the original plan of design of the park. In accordance with garden fashion at the time and the desire for prestigious plants, the trees close to the building are exotic specimens, mainly conifers from the North American Pacific coast which came to Central Europe via England, Holland and France. Among the conifers in this park are, for example, a blue Cedrus atlantica, various cypresses (Chamaecyparis), giant sequoias, Eastern White Pines, red cedars and Canadian hemlocks. In the outer areas of the park, on the other hand, planting was confined to native trees.

Conifers dominate the area around the castle. Between these trees, there are open spaces with views to the distant surroundings. Some of these lines of sight are now overgrown while some of the individual trees within the groups have developed into magnificent solitary specimens. They, the meadows and the groups of rhododendrons dominate the park’s appearance today.

The Drachenburg and its park have experienced a varied history. The castle frequently changed owner, resulting in many changes to the building and the park. 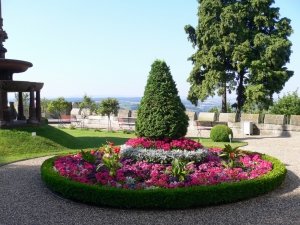 Opening Times:
End of March until early November: each day 11:00 – 18:00
Closed the rest of the year, except for special events

The Drachenfelsbahn (Drachenfels railway) departs every half hour from Königswinter for theDrachenfels between 9 a.m. and 7 p.m. The railway climbs almost 300 metres. www.drachenfelsbahn-koenigswinter.de