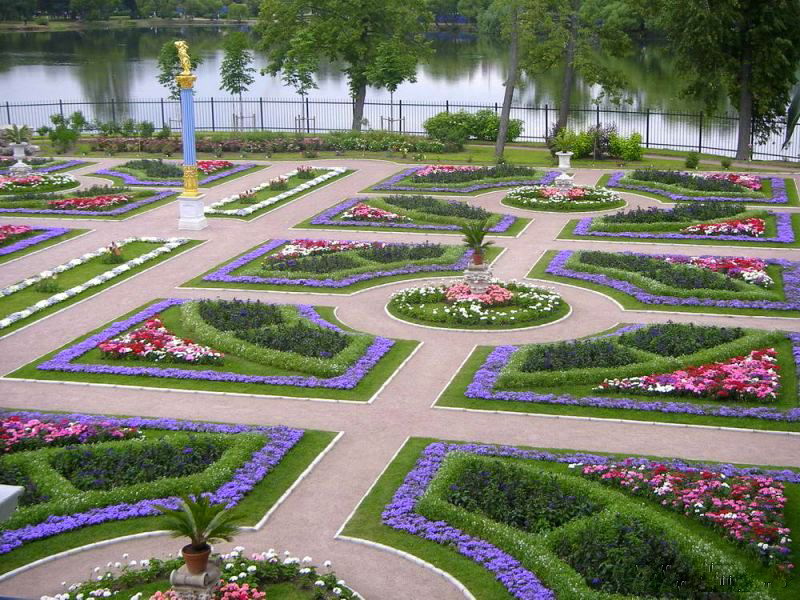 Having studied garden history in the United States in the late 1960s, it is no real surprise that nothing was ever taught about Russian gardens. Outside of the gardens of England, France and Italy, we learned very little about European gardens which is very sad considering their influence and importance.  Our primary book on garden history gave one short paragraph on Peterhof and a black and white photo of the long canal, and a rather poor photo at that.  It is not that Peterhof was unknown, but there was a scarcity of information and many parks and gardens were completely ignored.  Marie Luise Gothein wrote in A History of Garden Art (1913/1928) ‘…there arose not only the palaces of the emperor and nobles, but gardens as well; the Tsar had learned to recognise the earlier examples, having studied them on his travels in Holland, England and Germany…Here he and his followers adopted all the ideas that the style of the time had to give’. A full century before Gothein wrote her book, John Claudius Loudon visited St Petersburg in 1813-14; he gives a more descriptive account of the gardens in his Encyclopӕdia of Gardening (1836) and adds that ‘…in Petersburgh all public works are on a scale of magnificence that fills a stranger with  astonishment’. I believe that the lack of information and knowledge from those student times had more to do with ignorance, the politics of the day and the Cold War, rather than a lack of interest.

Our historic gardens are really a series of layers, a palimpsest, which successive generations alter according to current taste, fashion and economics. So the gardens that Loudon saw are not the gardens that you see today, nor are they the gardens that Peter the Great was familiar.  In the early 1700s, development of the palace and gardens under Peter the Great began more modestly with a small palace and few of the fountains seen today existed in his time. The upper garden was used for vegetables and the ponds for fish.  The design for a new palace and garden by Jean-Baptiste Le Blond, still modest by European standards of the time, was expanded from 1745-55 by Elizabeth of Russia.  Peter’s palace and gardens, now enlarged and with further embellishments, continued to change with successive monarchs and became known as the Versailles of Russia. While there is constant comparison to Versailles, I think it is unfair to use this label. Peterhof is certainly smaller, but in many ways richer in its detail and certainly its’ approach from the sea is glorious. There is no other garden, anywhere, which overwhelms the visitor with hundreds of fountains and gilded statuary.  I find that Peterhof is more humane in scale than Versailles and this must be a result with Peter’s time in Holland. Gothein is absolutely correct that the influences come from Holland, England and Germany.  Oddly, she left out the influence of the Italian Renaissance, specifically the approach from the sea as it has the classic hallmarks of the Italian villa relationship to the garden. There is another great Italian legacy with the use of the amazing water jokes that are found in the garden. Here, the gardens are far more playful than their French counterparts, and full credit must be given to the restoration of the fountains as they still operate with gravity rather than electric pumps.

Garden restoration seems a modest enough idea at first: simply put back what was there.  However, the process is anything but simple where the multiple layers of design and introductions of features and plants leave a difficult problem for the restorer or conservator. What do we keep, what do we lose, and what do we add, how do we deal with thousands of visitors?  Nature itself has taken over parts and altered or destroyed the original intent, but most often it is the action of men that made the greatest change.  Indeed, Peterhof more than most gardens has suffered the most dramatic of changes during the Siege of Leningrad where palace and gardens were essentially destroyed. There are never absolute answers as we must consider not only the historic evidence which is often lacking in places, but issues of economies, maintenance, skills, appropriate materials and the visitor experience.  Climate change may affect the plant materials meaning that the original species are not suitable or are no longer available.  Sadly, historic gardens are notorious for having little detailed information on plants and particularly on plant arrangements, mixes and spacing. Many of the plant species that we use through other parts of Europe cannot survive the harsh winters resulting in a more creative use with a limited palate of species. This also led to special collections to be housed through the winter months where Winter Gardens or conservatories became an integral part of the garden. Gardening in a cold climate is not without its challenges! I believe that planting is one of the greatest challenges to the conservator who must look for a balanced solution to present a situation that is appropriate for a time and place, but must concede to other issues such as maintenance.  Whatever is done must respond to the concept of the garden.

Peterhof is a garden with allées, bosquets, cascades, canals, gilded statues, plant collections, orangery, and charming villas: Montplaisir, the Hermitage and Marley.  Intimate spaces and grand features are dominated by the palace; however when one is in the gardens, the palace disappears from sight as though the garden is the greater part of the whole.  It is a garden of contrast: both visually and physically stunning, but with an intimate charm and humour. There is always as sense of surprise as all great gardens should have. It is an even greater surprise when one realises what has happened in the life of this garden. You can see in the faces and actions of the visitors how much the garden is enjoyed by all ages. Peterhof has been reborn through sensitive restoration and conservation; it is not a copy of earlier gardens but one that is unique in its own right. And today, while these gardens continue to be restored, they still fill all those who visit with the same astonishment that Loudon experienced two centuries ago. Peterhof is more than a restored garden, it is a place of pride and national identity. It is clearly a Russian garden of the 18th and 19th centuries that has been reborn as a great garden of the 21st century.