You Are Here:Home / European Themes / Pildammspark

In the beginning of the 20th century it was decided that the area around Pildammarna (the willow ponds) in Malmö would play host to the Baltic Exhibition of 1914, showcasing the latest technology and design. After the show plans were made to develop the site to a permanent public park, first following the idea of the English romantic style, but then the remainder of the park was designed in classicist layout with monumental character.

Thanks to its history, to planning in different stages, to the neo-classicist layout and its grandiose dimension, Pildammsparken is quite unique among northern European parks.

The park is structured by four main elements, linked by alleys and smaller paths: the “flower street” (Blomstergatan) with the 1914 pavilion and fountain, where each year a new flower theme is realised, the ponds with three fountains opening the park to the housing districts in the east, the rose garden and finally “Tallriken”, a tree arena of 160 metres diameter. In combination with the artwork the park offers many places for contemplation, but also for sports and many events during the year and thus attracts Malmö’s citizens and visitors alike.

Prior to its centenary in 2014 the park will be further enhanced with more vegetation surrounding the ponds and a new themed playground and open-air gym.

Thanks to its history, to planning in different stages, to the neo-classicist layout and its grandiose dimension, Malmö’s Pildammsparken is quite unique among northern European parks.

In the beginning of the 20th century it was decided that the area around Pildammarna (the willow ponds) in Malmö would play host to the Baltic Exhibition of 1914. This showcased the latest technology and design and was a major success that attracted almost one million visitors. Following the exhibition the decision was taken to complete Pildammsparken in the English, romantic style. The plan was later revised to create a classicist layout with monumental character in the remainder of the park.

The park is structured by four main elements, linked by alleys and smaller paths:

The park’s ponds started life as Malmö’s water reservoirs. There are today three fountains and a large water wall accompanied by a sound and light display during the evenings of the summer months. During the summer this is a place of quiet contemplation, whereas it is transformed into a popular ice-skating area during cold winters.

Margaretapaviljongen with ‘Blomstergatan’ (the flower street) and the old granite fountain ‘Templet’ (the temple) are remnants of the Baltic Exhibition. The exhibition area was designed by renowned architect Ferdinand Boberg in cooperation with Crown Princess Margareta. The encompassing brick walls of Blomstergatan were demolished following the exhibition but were rebuilt in 2005. The theme of Blomstergatan is changed each year in accordance with the flora and fauna policy of the City of Malmö, and the grand flowerbed is updated in the spring and summer.

Drottning Silvias Rosenträdgård (Queen Silvia’s Rose Garden), situated to the west of Blomstergatan, was opened in 1995 on the queen’s birthday. The garden holds much beauty for the rose enthusiast with its large variety of species.

‘Tallriken’ (the plate) which has a diameter of 160 metres evokes an overwhelming cathedral like feeling.

The park’s artwork includes the popular light display ‘Jimmis’ by Monika Gora with its alluring rays dancing through the dark of the park at night. The more traditional sculptures include ‘Galathea’ by Erik Möllerberg and ‘Kastanj’ by Bertil Nilsson.

Several events are held in Pildammsparken each year, some using the areas around the ponds others the circular event arena ‘Tallriken, where the amphitheatre plays host to a series of free events hosted by Malmö Sommarscen over the summer. 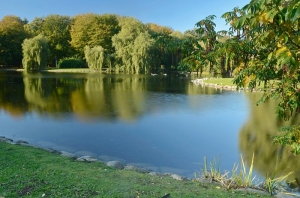