Today the Rheinpark created for the Bundesgartenschau (German garden show) in 1957 still largely has its original form and so reflects the garden architecture of the 1950s.

The central location of the park on the right bank of the river Rhine is the reason for some of its outstanding features: on the one hand the spatial contours with the vantage points, which integrate the prominent wetlands and characteristic landscape of the lower Rhine, and on the other hand the axes with a view to distinctive buildings on the left river bank of the Rhine such as the Cathedral and St. Kunibert.

The location on the river influenced not only the function of the park as an extended river promenade but was also the reason why numerous wells and fountains highlight and effectively present the theme “water”.

In 2007, the park was extensively restored. The spatial structures, the shape of the grounds, and the plantations and view axes, which define the space, were restored and the structural elements such as buildings, water basins, alcoves, pergolas, paths, walls and steps were repaired.

The “horticultural islands” with shrubs, summer flowers and roses were carefully reinterpreted based on the original idea.

Today the Rheinpark created for the Bundesgartenschau (German garden show) in 1957 still largely has its original form thus reflecting the garden architecture of the 1950s, which received further formative elements in the 1971 garden show.

The Park Café built for the 1957 garden show is a special feature in the park landscape. Like the Rose Café it is part of an interplay between architecture and garden art. Today, the Park Café with its flower beds in the court and in the tropical garden ablaze in beautiful colours, which change seasonally, is still one of the highlights of the garden.

The name, tropical garden, stems from the former primarily subtropical plants. As a contrast the flower beds in the flower court are curved like a painter’s palette and embedded in yellow and orange coloured clinker bricks.

The water garden with its water fountains encompasses the western edge of the large flower court. The refreshing water, the view onto the plantations on the one side and to the Cathedral looming in the background invite the visitor to stop and linger.

To the north of the Park Café there is a little hill. From there, one has a sweeping view over the large central meadows and fields and into the park.

On the eastern side, a network of delicate steel pergolas, erected in 1957, connects four trapeze-shaped terraced water basins, which are surrounded by high trees and bamboo woods. In 1971, the water stairwell made of pointed triangular basins arranged in steps was added.

Directly behind the flood protection wall lies the heather garden with typical heath plants. This garden was created for the 1971 German garden show. Juniper bushes and stones emphasize the heathland character of the area.

Behind the Staatenhaus (house of states) lies the Mediterranean garden, which was also designed for the 1971 garden show. This terraced area, which is set apart by walls of varying height, differs consciously from the otherwise open concept of the gardens in the Rheinpark. The design and the plants convey a Mediterranean atmosphere. The palm trees and tropical plants, which are deployed there in the summer time, contribute to the southern ambient just as the impressive examples of the blue Atlantic cedars that grow in the back of the garden courtyard do. In May 2006, the plantation of the herbaceous borders with their silver leafed bushes was completely renewed by the park management.

The shallow flamingo pond opposite the Mediterranean garden was designed by Günther Schulze and Joachim Winkler.

The small Japanese garden on the edge of the park next to the pond was a gift from the twin city Kyoto for the 1971 garden show.

From spring into late summer the visitor to the shrub garden is greeted by the ever-changing colour-coordinated blossoming of the plants.

Its heightened position within the vast lawns makes the rose garden a further centrepiece of the Rheinpark. Bastion type parapets from which the visitor has a wide view of the park distinguish it. In the park, large asymmetrical flower beds and delicately formed steel alcoves shape the nearly completely enclosed central garden, which was designed for the 1957 German garden show. The refurbished construction elements such as the pergola, the five formerly glass-walled pavilions and their trellis elements account considerably to retaining the general character of the Rheinpark as a garden monument of the 1950s.

The focus was to reinterpret the “rose” theme. Robust rose types were combined with shrubs and reeds. The framework for the eastern edge of the rose garden is formed by a grass belt which nestles around the pavilions thus creating a space and inviting the visitor to dwell a while.

Flat steps lead from the rose garden in the direction of the Rhine to the so-called Adenauerweiher pond. The characteristic feature of this pond like that of the flamingo pond is the typically 50s kidney shape. In 1971, mill stones were added to the water-well complemented by two “Kronenbrunnen” (crown wells).

The middle and northern part of the park is shaped by the gently sloping banks of the Rhine with the trees typical for the lower Rhine countryside, such as poplars, willows and magnificent individual species. TheRheinparkboulevard leading along the river bank is a footpath and cycling lane of national importance.

The adjacent central band of large meadows and fields is an “experience axis” for many activities. A group of flowering cherry trees form the transition from the tree giants to the open space and especially in spring mark the meadow fringe with their white and pink coloured blossoms.

The redesign of the Tanzbrunnen (dance fountain) for the 1957 garden show created the “star wave marquee” with the platform of the Tanzbrunnen surrounded by water fountains, which is still a widely visible hallmark. Since 1971 the large umbrellas have given protection against sun and rain.

From the Höhenweg there is a sweeping view over the park to the Cathedral. Even more beautiful though is the panoramic view from a gondola on a cable car trip over the Rhine to the Flora, the botanical garden and the zoo. 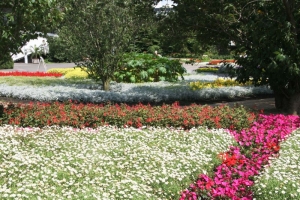