You Are Here:Home / European Themes / Schloss- and Auenpark Neuhaus 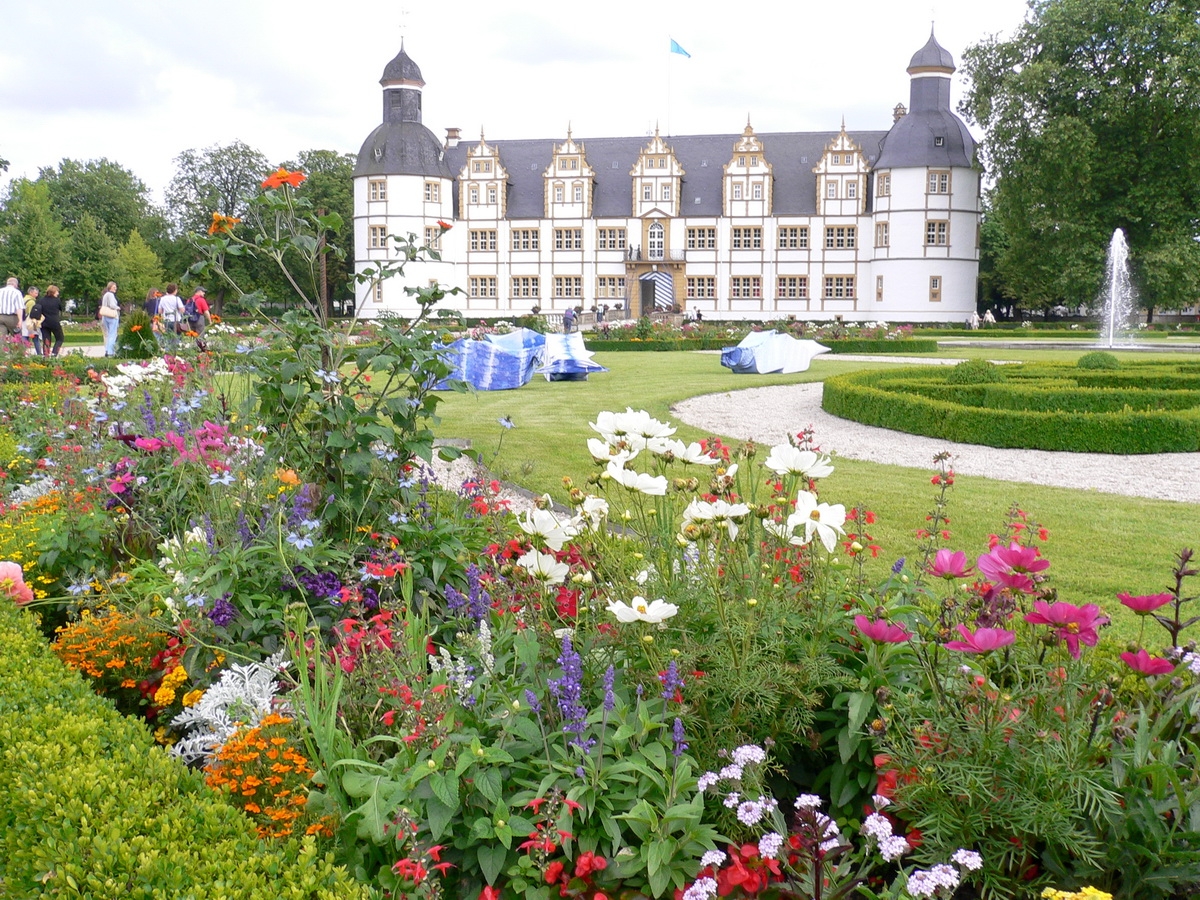 The former episcopal residence “Schloss Neuhaus“ is regarded as one of the most beautiful moated castles built in the Weser Renaissance style in Germany. The high point of the castle’s fortunes probably occurred at the time of Klemens August of Bavaria, the prince-bishop who developed it into a Baroque residence in the 18th century.

The current Schloss- und Auenpark was created in 1994 on the occasion of the Landesgartenschau (regional garden exhibition) in the Schloss Neuhaus district of Paderborn. The complete park complex consists of the partly-reconstituted park at the castle and the ecological recreation area formed by the floodplains of the Alme, Lippe and Pader rivers.

Today, the moat, the partly-reconstructed historical Baroque parterre with its avenue of linden trees and the historical garden sculptures once again give a lasting impression of the splendour of the garden in the prince-bishop’s time.

There is a green route along the river floodplains complete with playgrounds and recreation areas. The route starts in the centre of Paderborn, passes by Schloss Neuhaus and leads to the Lippesee. “Floodplains as Habitats” is the theme of this green corridor.

Schloss- und Auenpark Neuhaus (Neuhaus Castle and Floodplain Park) was created in 1994 as part of the Landesgartenschau (regional garden exhibition) in the Schloss Neuhaus district of Paderborn. The park is a combination of the reconstituted park at the former episcopal residence and the ecological recreation space formed by the floodplains of the Alme, Lippe and Pader rivers.

“Schloss Neuhaus” is built on a headland formed by the three rivers. It was originally an episcopal residence and was constructed in various building phases from 1370 to 1597. A Renaissance garden already existed at that time.

Klemens August of Bavaria (1700 – 1761)¸ the powerful prince elector of Cologne and prince-bishop of Paderborn, developed the whole complex into an impressive Baroque residence with a driveway leading to the front of the house and new bridges across the moat.

Planning and construction of the complex was started in 1725 on the basis of plans by Christoph Nagel, the master architect from Paderborn. The plan was published in 1736 in a Festschrift which was issued on the occasion of the 900th Libori anniversary. Hatzel, the court gardener at Schönbrunn in Vienna, was brought especially to Neuhaus to oversee the implementation of the plans for the splendid garden. The plan dating from 1753 gives an authentic picture of the garden at that time.

The garden had strict geometrical forms and was centred on a large pool with a tall fountain at the centre of the longitudinal and diagonal paths. An artistically designed parterre à l’angloise was created directly at the castle. This was embellished with lawn patterns, ornamental flower beds and areas with coloured pebbles. The park continued beyond the large fountain with a boscage of regularly-spaced yew trees and was framed by an avenue lined with a double row of linden trees and long strips of lawn. The latter met in a large semi-circle at the banks of the Lippe river.

As a result of secularisation at the beginning of the 19th century, the complex fell into disrepair within a short time. The castle island was used as a military facility for almost two hundred years and altered accordingly. Barracks and stables were built on the park and the other areas were used for military exercises and riding.

The “rebirth” of the Baroque garden following the period of military use occurred on the occasion of theLandesgartenschau in 1994. Parts of the Baroque garden were recreated, with great attention being paid to detail. Today, low box hedges once again form the outlines of the Baroque parterre, as shown in plans from the 18th century. Red brick chippings, white marble gravel and black magnetite accentuate the contours of the ornamental structures. Green areas of lawn add a light touch to the strict geometrical form. This part of the garden is framed by flower beds, which are planted with different flowers throughout the year, as indicated in the original plans. Particularly in spring and summer, the parterre’s fountains and successive planting make it the main attraction for the garden’s many visitors.

There were clear limitations regarding the re-creation of the large Baroque garden due to the various buildings which had been constructed over time. As a result, the large fountain was not reinstated. Its shape is, however, outlined in the pattern of the paving stones and a fountain theatre now stands in its place. There are beautiful views from the theatre platform across the parterre towards the castle with the moat, which was reconstructed in 1994, and the avenues with linden trees. It was decided to keep the old trees rather than to reinstate the old garden completely.

The original Baroque garden sculptures at the Bürgerhaus are also worth seeing. They represent the 12 months of the year.

It is easy to overlook the recreated Kabinettgarten on the side of the park near the town. This garden is directly in front of Prince-Bishop Klemens August’s former study.

The avenue ends at the “Geophytenwäldchen” in the north of the park. A wonderful carpet of blossoms consisting of anemones and other early flowering plants unfolds here on the forest floor in spring. Further to the west, visitors can experience the special atmosphere at the spot where the waters of the full-flowingAlme meet those of the river Lippe. In summer, it is possible to cool one’s feet in the shallow water here.

At the time of Landesgartenschau, the priority was to create spaces for recreation in the Auenpark by using the river floodplains and the intensively farmed areas of land, which were, moreover, also criss-crossed by roads. This resulted in the creation of a connected series of spaces for recreation along the riverscapes stretching from the town centre of Paderborn to the Lippesee. 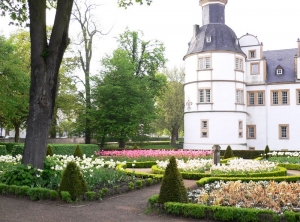 Cultural Programme and Exhibitions:
Current information on the cultural programme can be found at www.schlosspark-paderborn.de andwww.gartentage-schlossneuhaus.de

General map and further information on the park:  There are a historical map of the garden and a general map to the right of the main entrance. Maps and information can be found at www.schlosspark-paderborn.de

How to get there:
Padersprinter Bus routes 1/ 8/ 11 from Paderborn main railway station,
BVO Bus routes 420/ 444 in the direction of Schloß Neuhaus