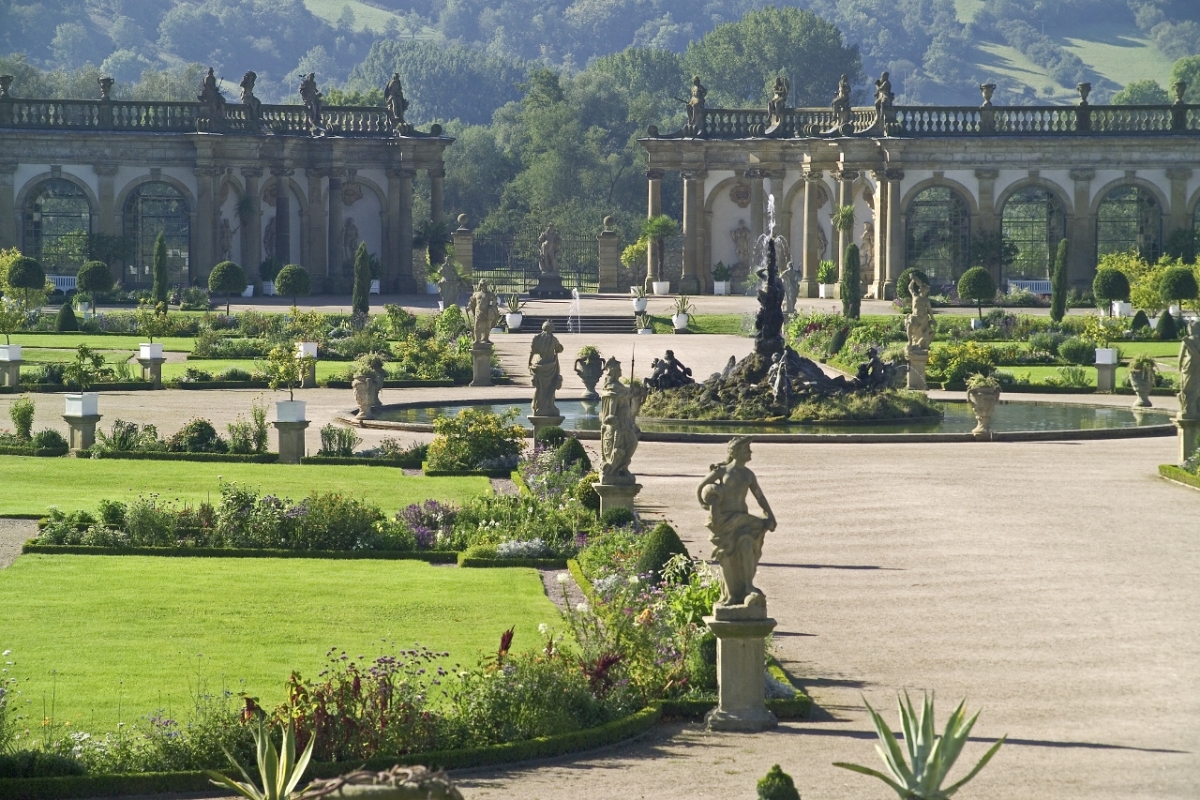 Weikersheim is a significant testimony to garden design of the late Baroque in southern Germany. Due to their integration of the town, the palace and garden comprise a particularly attractive cultural ensemble which has been listed in the State Registry of Historical Buildings since 1928. The restoration of the garden to its appearance of 1750 became an established aim for the care of the historical ensemble after the palace and garden had passed into the possession of the State of Baden-Württemberg in 1967. Particularly noteworthy features here are the surviving original lines of the garden’s layout and the original inventory of sculptures.

Apart from the Baroque pleasure area, the historical picture presented by the palace garden includes further areas such as the fruit, kitchen and rose gardens. Cultivated plants which are traditionally associated with the garden are therefore shown in various places. Among these are the orangery plants in the pleasure garden and the auricula and fuchsia collections in the castellan’s garden. The alchemy garden draws attention to the mystical past of Count Wolfgang II, the builder of the palace. Plants which were once associated with “magic and witchcraft” are displayed on the site of his former laboratory tower.

Weikersheim is located in the valley plain at the meeting of the Tauber and Vorbach rivers. An impression of a count’s small 18th century residence can still be gained today from the palace ensemble with its gardens and its attractive integration of the town and the largely unbuilt landscape to the south of the palace. The development from a fortified medieval structure to an impressive Baroque ruler’s seat of power can be traced in the almost completely preserved ensemble.

The palace garden is presented to visitors as it is seen in Georg Adam Eger’s oil painting from 1773 in the palace. The Baroque pleasure area is divided into a broderie parterre and an orangery parterre. Four compartments are framed by “plate-bandes” – flowering borders where Baroque rules of composition are applied. The shaped trees planted between them further subdivide the borders – symmetry and contrast were used to define the beauty of borders. The Hercules fountain is located at the centre of the flower parterre. The ancient hero is portrayed on a mound of tuff in his fight with the dragon Ladon. A jet of water rises from its mouth. The element of water, particularly when in motion, was regarding as a garden’s living soul during the Baroque period. Fountains expressing this idea were moreover testimony to the technological mastery of a residence.

The significance of the palace garden essentially lies in its collection of sculptures. The ornamental figures have survived almost in their entirety, a situation found in hardly any other gardens of this period.

The orangery building was constructed by Christian Lüttich (1688-1769) at the south end of the pleasure garden in 1723 and is divided into two sections. It and the reflecting basin in front of it combine to form the orangery parterre. The sophisticated building has several simultaneous functions. It is used to house the valuable stocks of plants through the winter and also integrates the sala terrena (garden hall) in the pavilion at the side. With its arc de triomphe design, the orangery acts as a counterpole to the palace and creates an impressive setting for the view out into the countryside. Its framing of the countryside rounds off the garden and is a typical feature of design in southern German Baroque.

Other smaller buildings in the garden include the gardener’s house of 1708 and the arms house of 1817. The lower floor of the gardener’s house is decorated with frescoes and stucco. It served as a “sala terrena”. The gardener’s living quarters were on the upper floor. The ground floor of the arms house was home to a collection of weapons while the upper floor was used as a dining room and also held four tables for playing games. Today, both buildings are used by the Academy of Music.

The bird house and tea house are located at the south end of the garden. Both buildings were built in 1715 as two-storey pavilions. The bird house to the east had a salon on the upper floor and an aviary on the ground floor. The tea house to the west featured a “saletta” upstairs while a grotto was constructed at ground level.

There is written evidence dating back to 1602 that various areas for cultivation traditionally belonged to Weikersheim palace garden. As time passed, the less prestigious areas were moved further to the edge of the garden. A new area for the kitchen garden was obtained directly beside the gardener’s house in 1708 with the filling in of the city moat. Today, visitors can once again see herbs and vegetables there, some of which were cultivated and used in the palace kitchen at that time.

Alchemy flourished during the Renaissance. As a convinced supporter of this philosophy, Count Wolfgang II zu Hohenlohe (1546-1610) had a laboratory for alchemical experiments constructed in 1602. Today, only the remains of the ground-floor arches survive. The alchemy garden was established on the site of the former building and is used as an exhibition area devoted to this mystical culture.

Further special gardens and plant displays draw attention to the garden’s tradition of plant collections. An inventory list from 1745 in Weikersheim provides proof of the garden’s auricula. Today this plant is displayed for the public on a “wooden etagère” inspired by auricula theatres, just as it was in the 18th century. A second exhibition is devoted to fuchsias. Over 7000 types of fuchsia – widespread today as an ornamental potted plant and balcony flower – are now known. The Weikersheim fuchsia display looks back to the beginnings of this diversity of breeds and shows some historical varieties from 1830 – 1910 in the castellan’s garden.

The rose garden, which was laid out in 1865 by Mathias Lebl, can be found at the stables. Originally conceived as a landscape garden, it is presented to visitors today in modern form. The statues which can be found there were originally commissioned by Carl Ludwig for his garden on Carlsberg hill and were erected there in the 1950s. The garden is currently being reworked and replanted on the basis of its original design. 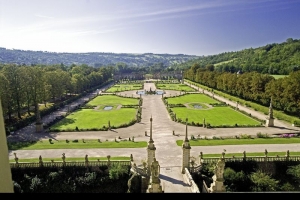 Information and map: Available in the shop