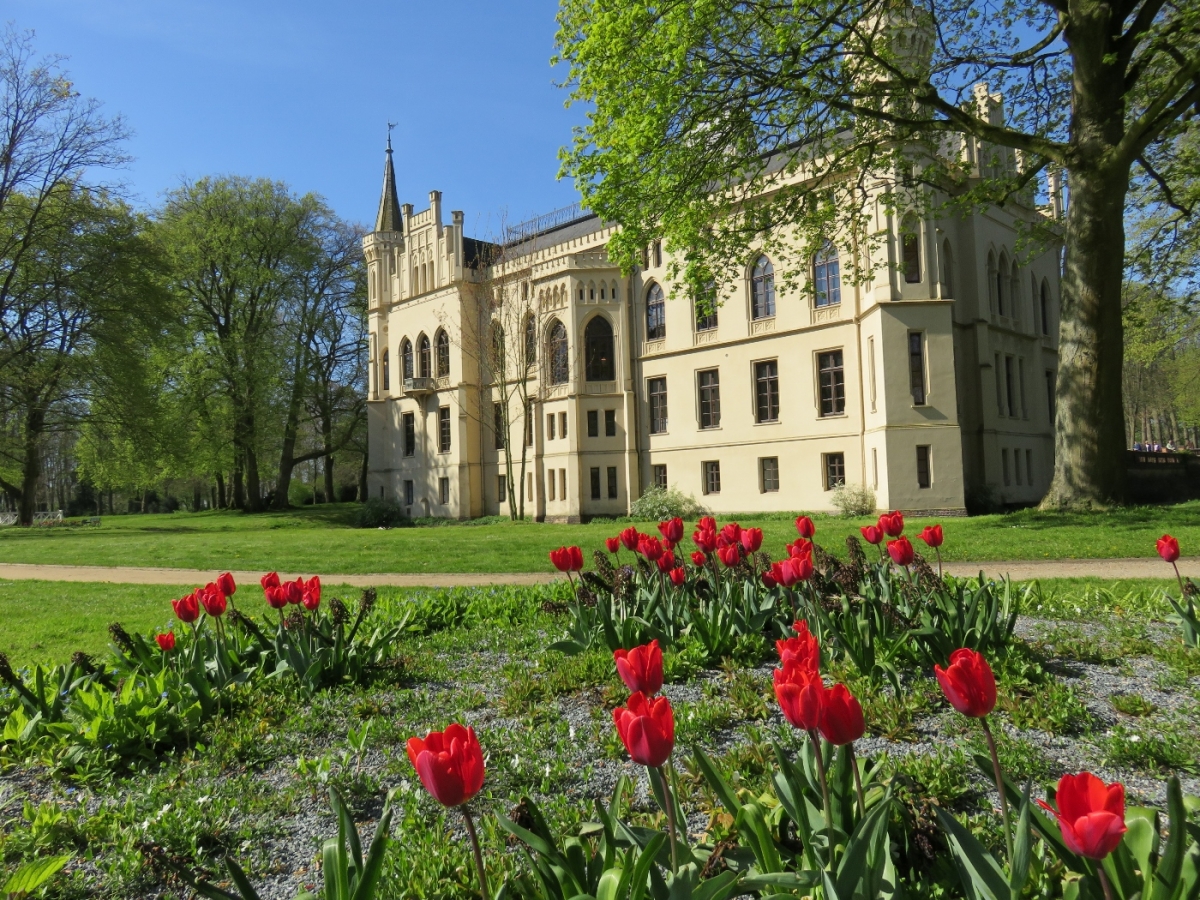 A travel account of East Frisia which was written as far back as 1798 already contains this description: “On the other side of the Leda, directly on the riverbank, lies Loge, a beautiful village with admirable pleasure attractions, gardens and avenues which are illustrative proof of the taste of its owner, Count von Wedel.”

Today as in the past, the English landscape garden at Schloss Evenburg is open to the public for free viewing. Visitors can stroll along curving paths in smaller or greater circles around the castle and moat or admire the “Great Avenue”, the longest such stretch of trees under the skies in northwestern Germany.

The English landscape garden and above all the long avenues are beautiful throughout the seasons. The snowdrops are the first plants to flower on the lawns in early spring. They are succeeded by wood anemones and, at the beginning of May, by lady’s smock. A short time later, the heady scent of lime-tree blossoms fills the air for weeks. The castle courtyard is home to beds with perennials developed by Ernst Pagels (1913-2007), the plant breeder from Leer. Summer, autumn and winter are the times when the park and avenues are filled with beautiful reflected light and patches of sun.

Schloss Evenburg in Leer is comprised of the trio formed by castle, park and forecastle. The park is characterised by historical buildings, a wide variety of vegetation, still waters and embedded open expanses of lawn.

Entering through the gate archway of the forecastle, visitors come upon the unadorned circular lawn surrounded by old lime trees, thereby gaining a first impression of the English landscape garden and the remarkable avenues. Historical elements were taken into consideration when the castle island was being redesigned. The northern area neighbouring the castle island used to be the site of service buildings and was also the location for a nursery with greenhouses. Today, it is home to a playground. Narrow herbaceous beds take up the structure of the former nursery. The outer areas and the ornamental bed at the new gardener’s building invite visitors to linger.

The eastern part of the park is dominated by the large castle lawn while the south-east section is characterised by a dense area of woodland-type vegetation which developed during the period of neglect.

The section to the south of the castle island provides access to the quieter southern parts of the landscape park. A striking circle of beech trees can be found on the loop walk opposite the southern façade of the castle.

The central area of the park is dominated by mighty individual trees and by groups of trees. This section affords visitors a view of the agricultural areas to the south.

The historical avenues – the older Evenburgallee and the later Mühlenallee – link the park to the surrounding countryside. Mühlenallee leads from the park towards the Leda river, the view opening up eastwards to the “horse pasture” and southwards to the agricultural area, which is structured by groups of trees known as “clumps”. Evenburgallee, which leads to the town of Leer, was laid out in various phases as a double-rowed avenue of lime trees stretching for almost one kilometre.

The park and avenues were left to their own devices from around 1930 until 1998 and the natural world took full advantage of this opportunity. Uninterrupted areas of woodland growth developed through natural succession and it became impossible to identify the network of paths.

The administrative district of Leer acquired both the castle and the English landscape garden in 1975. In addition to the restoration of the castle, it was finally decided at the end of the 1990s to save the park along with its old trees and avenues from further decline and to re-establish it on the basis of historical precedents.

The park has been undergoing restoration over many stages in close consultation with the State Office of Lower Saxony for the Care and Preservation of Historical Monuments.

The original principle inherent to the complex must be adhered to at all times and no “improvements” may be made to the original park. 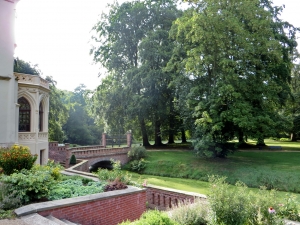 Cultural activities and events:
Meet The Gardener, Spring Festival, Dinner in White, International Bat Night , and some others

Map: PDF as download
Accessibility: All main paths are fully accessible
Dogs: Dogs on leash
Bikes: Bikes are not allowed in the park