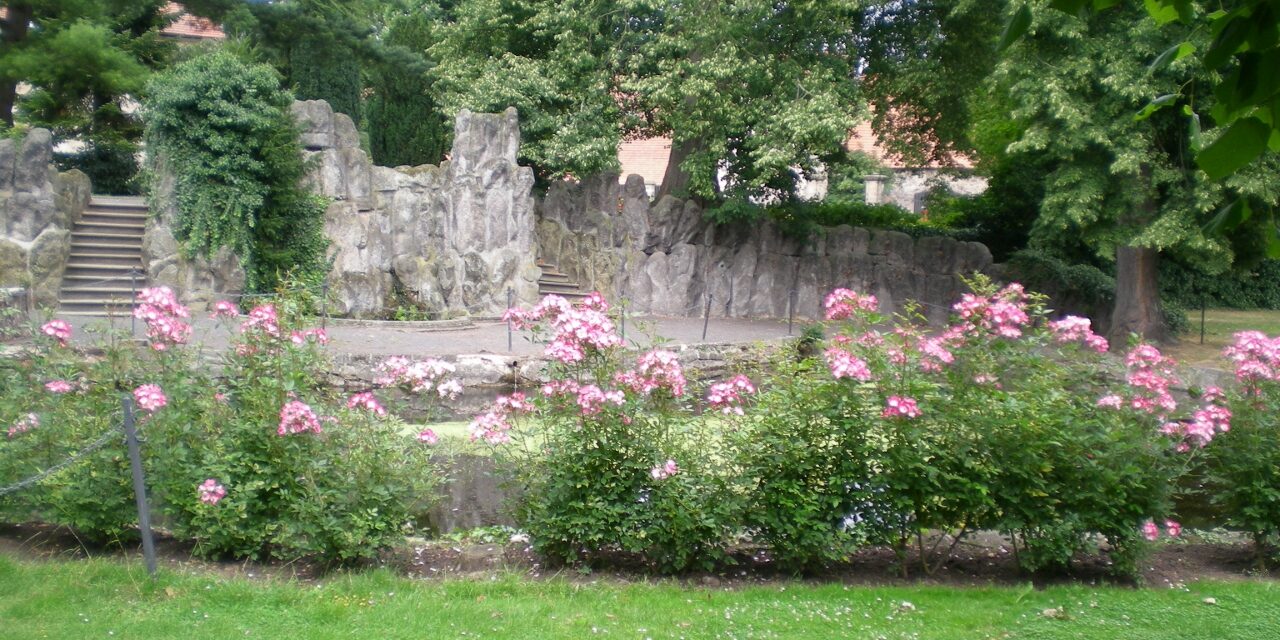 A Baroque garden with terraces, parterres and a high surrounding wall was created on the instructions of Landgrave Karl (1654 – 1730) from 1685 onwards around Schloss Haydau, a former convent which later passed into the possession of the landgraves. It was possible to look out over the landscape of the Fulda river plain from some sections of the wall, the inside of which was furnished with niches. An elaborate flight of steps with an artificially-created grotto has survived in the park. It is reminiscent of similar structures in Landgrave Karl’s park at Wilhelmhöhe in Kassel and is a particular attraction of the Haydau garden. A new orangery building was erected to house tender plants in winter. Today, an oval fountain basin from this period can still be found on the upper terrace.

Trees and shrubs dating from the 19th and 20th centuries, among them two striking pyramid-shaped oaks, have changed the southern area of the garden and given it a romantic character of its own.

Large areas of the garden have now been reworked, the younger trees being retained and due consideration being given to factors involved in the care of a garden with listed status. The aim is to restore the garden to a close approximation of its Baroque state.

The ensemble of buildings comprising a three-winged medieval structure with cloisters and a Gothic church is regarded as one of the best-preserved convent complexes in Hesse. Today it is used as a Conference and Cultural Centre. In the early 17th century, a new garden was laid out as part of the work carried out by landgrave Moritz der Gelehrte (“Moritz the Learned”) to convert the convent into a princely summer palace. Its current appearance is still characterised by this process.

The enlargement of the complex and its redesign in Baroque style took place under Landgrave Karl (1654 – 1730), who gave it to his wife Maria Amalia in 1685. The orangery building, which still exists today, was constructed to the east with an impressive facade while the “manor house” was built beside it, thereby forming the concluding element of the older elongated farm and service yard to the south.

Today, it is still possible to see where the garden was enlarged to the south to encompass a terrace at a lower level in front of the orangery. The high enclosing wall is furnished with niches here and curves out in a semicircle at one point. An opening in the wall enables visitors to get a view of the ruins of a chapel on a hill in the Fulda river plain. This chapel is regarded as the origin of Haydau. Elaborate steps behind a large water basin at the supporting wall for the garden terrace can be found on the axis of the curve in the wall. The piles of stones arranged here to create a “grotto”, an apparently natural rock formation between two curving flights of steps, are very similar in shape to the “grotto works” in Landgrave Karl’s park in Wilhelmshöhe. This “grotto” is one of the particularly noteworthy attractions of the Haydau garden.

Directly in front of the south wing is a parterre which was once laid out in Baroque style and now survives in reduced form. The large oval fountain basin which forms the old central point of the garden marks the spot where the south axis crosses the main path on this level. The broderies and ornamental flowerbeds, later occasionally used as vegetable gardens, have long been replaced by areas of lawn. The overlandscaping which took place in the 19th and 20th centuries, including the planting of two striking pyramid-shaped oaks, gives the southern area of the garden a character of its own. These deciduous trees and conifers are for the most part to be included in the planned reconstruction of the garden in Baroque style.

When the western area of the main terrace was being restored to its previous design it was decided to create two semicircular arbours around a large lawn. The sections flanking these will be planted with dwarf fruit trees. This is also the plan for the lower garden area running down to the enclosing wall in the west, which is at present used for other purposes. Nothing remains of the northern part of the park, where the orchard, known as the “English Grounds“, was relandscaped around 1780.

Possible ways of developing the gardens were drawn up on the basis of a carefully compiled survey which took into account factors involved in the care of a garden with listed status. This occurred as part of the extensive general restoration of the historical ensemble of buildings from 1985-2001, an undertaking which was to serve as a model project for the care of monuments in Hesse.

Nothing remains of the garden of the Cistercian convent, which was founded in 1235 and dissolved in 1527. By contrast, it still possible to identify the divisions created from 1616 to 1619 on landgrave’s Moritz’s instructions to form a pleasure garden and two tree gardens as well as a “forecourt” to the east.

As part of the restructuring measures at that time, a “pleasure garden” with a “draw well” at the centre was created in the inner courtyard “so that water can be drawn from it for the purpose of the pleasure garden”. Moritz also ordered that the area should then be “divided ornamentally into various flowerbeds in accordance with garden design and stocked with all kinds of exotic, herbaceous plants and flowers.”

As none of this remained at the start of the major restoration work in 1985, the courtyard was designed in keeping with other convent cloisters but also taking into account current needs for its use. It features cross-shaped paths, lawns and an octagonal central area. A large number of medicinal herbs, old species of rose and clematis have been planted in the borders around the edges and vines have been placed on the south wall as a reminder of the time when Schloss Haydau was a convent. 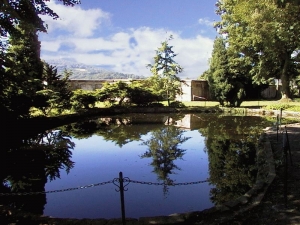 Opening times:
Park open all year.
The inner courtyard and inner garden can be visited during opening times of the tea room (below).