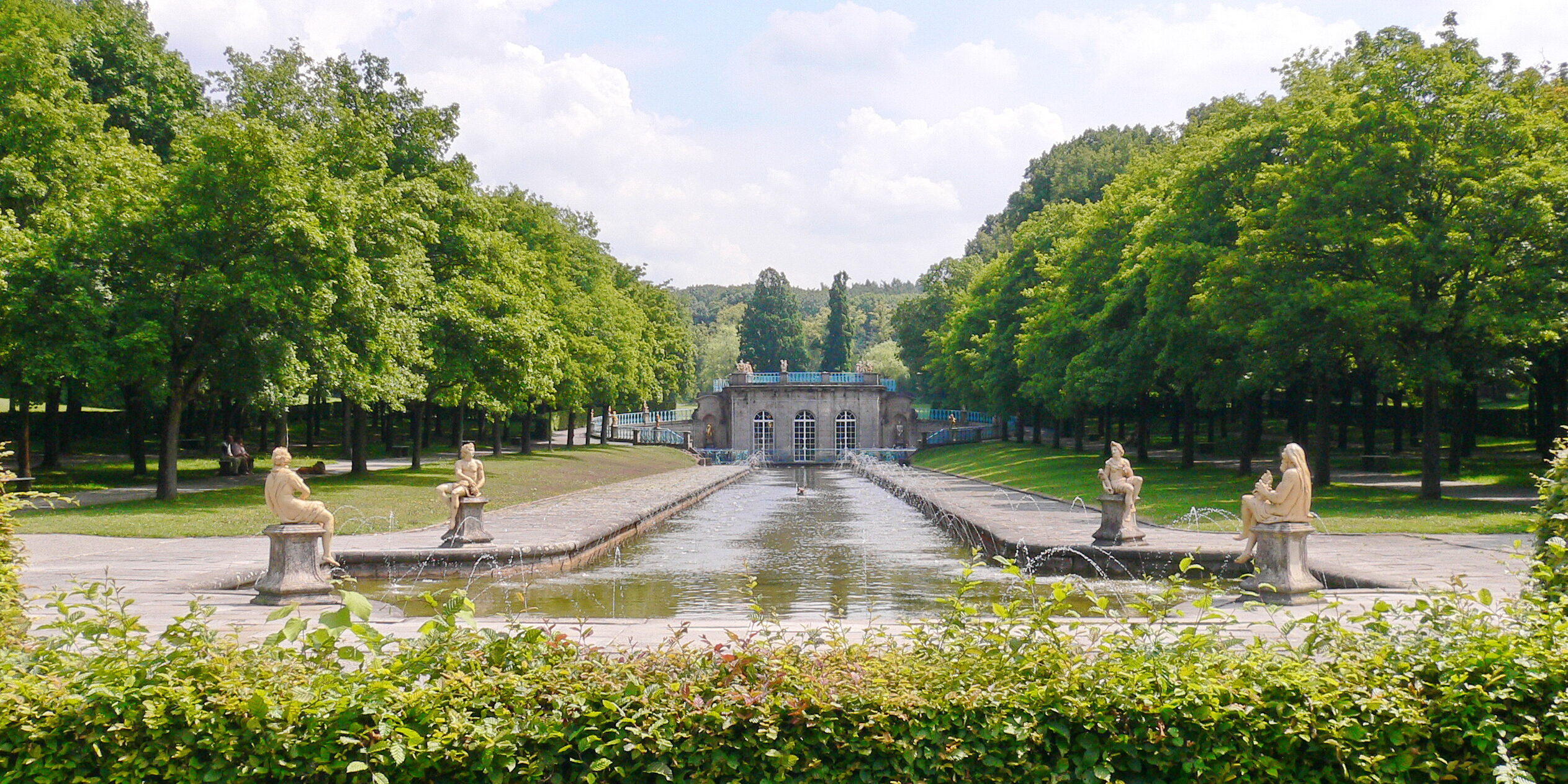 A “Gesamtkunstwerk” of Palace and Park

The former landgravian pleasure and hunting palace of Wilhelmsthal is one of the most important architectural monuments in the North Hesse region and among the most significant surviving rococo artistic creations in Germany. Some of the most outstanding 18th-century artists worked on the construction of the palace and the creation of the park as of 1743. They had been commissioned for the project by Landgrave Wilhelm VIII (1682 – 1760).

The park was first laid out symmetrically with regularly-structured elements in keeping with the taste of the period, but was then redesigned as a landscape garden towards the end of the 18th century. The original basic structure was retained during this process, however, so that visitors can still readily identify both design principles today. It is possible to make out the original form of the rococo garden with its figures and water features in the area around the partially reconstructed south axis. The northern area of the garden, on the other hand, presents itself as an apparently natural, idyllic stream valley.

The woodland outside the park features several hunting stars with forest aisles radiating out at regular intervals from specific points. These are a reminder of the woodland’s earlier use for the prince’s entertainment.

When Prinz Wilhelm (1682 – 1760) took over the old estate of “Amelienthal” to the north of the Hessian capital and residential city of Kassel in 1743, he began redesigning the modest property as a large-scale pleasure and hunting palace modelled on the latest French taste (“maison de plaisance”). A major art collector and art connoisseur – he founded Kassel’s famous collection of paintings – Wilhelm set great store by high quality. He succeeded in enlisting some of the most important 18th-century artists to work on the project, among them François de Cuvilliés (1695 – 1768), the court architect of the Electorate of Bavaria, and Georg Wenzeslaus von Knobelsdorff (1699 – 1753), the royal Prussian master architect.

Work on creating the gardens began first, in 1743, and was followed four years later by the construction of the palace. After a long interruption due to the Seven-year War and Wilhelm’s death, the park and palace were completed under Landgrave Friedrich II in the 1770s on the basis of partially modified plans. Landgrave Wilhelm IX (1743 – 1821) had the park redesigned as a landscape garden from 1796 onwards and this creation has largely survived to the present day.

The park is roughly pentagonal in shape, a form which was developed from the site’s previous structure featuring a hill vineyard surrounded by two water courses on its central axis. While the palace was built at the foot of the hill and thus at the lowest point of the site, it was accentuated as the central point of a varied axial system which extended beyond the park itself. This structure became obscured at a later date but was brought to the fore again in the 1960s with the planting of new trees. Thus, for example, Meimbresser Allee was re-created. This avenue started at the circle of linden trees at the western edge of the woods and led up to the palace, whereby its axis continued from the central rows of linden trees in the park as far as the “meadow circle” on the hill.

Two large iron grille gates set between mighty stone pillars provide access to the park, which is partially surrounded by a wall. A continuation of the Rasenallee, which starts at Schloss Wilhelmhöhe, enters the Wilhelmsthal garden through the southern gate while a circular bowling green surrounded by sycamore maples can be found on entering the main gate to the west. Two guardhouses built by court architect Simon Louis Du Ry (1726 – 1799) after the Seven-year War form the transition to the cour d’honneur of the three-winged palace.

A large cascade was planned for the central axis in front of the garden facade of the corps de logis. This was to be fed from the oval reservoir higher up (now the “meadow circle”) Conceived as the outstanding showpiece of the whole complex, the structure was never completed, however, and a pool set in an apparently natural landscape was constructed in its place around 1800.

The south axis, by contrast, was completed within Wilhelm’s lifetime. Following the restoration of the canal and the replanting of its banks with hedges and four rows of field maples, today’s visitors can now get an approximate impression of the park’s former appearance. The canal had been filled in when the park was being relandscaped. The sophisticatedly-designed grotto forms the end of the canal and the oval basin, which are enlivened by water features in summer. Based on a design drawn up by Knobelsdorff, the grotto now appears in much reduced form, however, as the once richly-ornamented and much vaunted interior no longer exists. By contrast, the numerous putti which were delivered from the Netherlands and which play blind man’s bluff or are endued with attributes, give visitors some idea of the park’s programme of figures with its references to nature and ancient mythology. This programme was originally much more extensive than it is today.

Only the second of two water basins which originally followed to the east of the grotto is filled with water. The elaborately designed and much admired “Chinese Houses” which served to house the landgrave’s precious and exotic fowl once stood beside these. Feeding the birds here provided the prince with a relaxing diversion, as observed on a visit in 1753 by Johann Christoph Gottsched, a professor of literature from Leipzig: “… certainly a very charming spectacle, as these extremely tame birds surrounded the man enticing them in great numbers, even flying onto his head and shoulders”.

The medieval-style watchtower built on the highest point of the vineyard by Du Ry in 1799 dates from the period when the grounds were redesigned as a landscape garden. 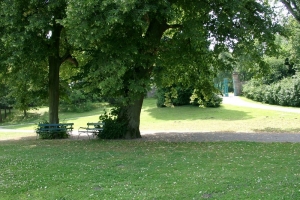 Opening times:
Park open all year
Visits of the castle only by guided tours that start at the top of the hour.

Admission: Admission to the park is free.

Events: Current information on exhibitions and other cultral events on this website: www.museum-kassel.de

Map / Information: Maps and information panels at different locations within the park