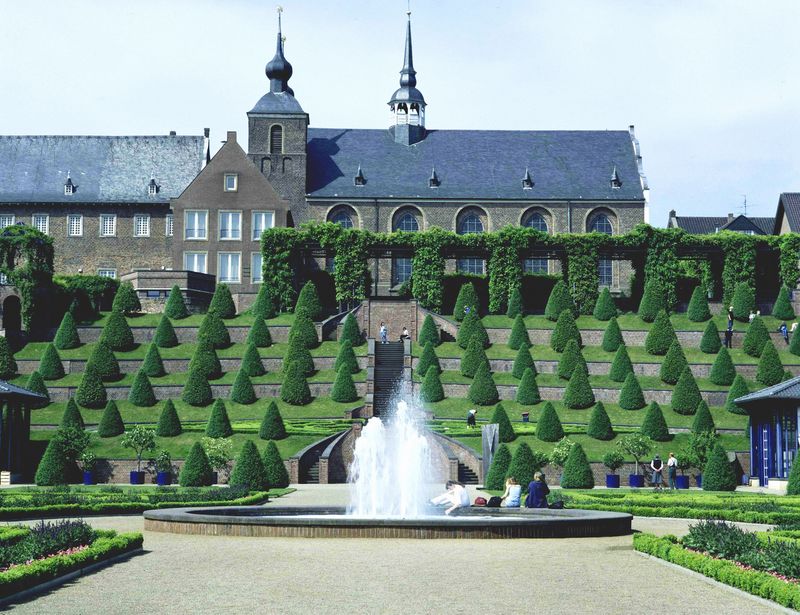 The terraced garden of Kloster Kamp (a Cistercian Monastery) is located on the southern slope of Kamper Berg. Created between 1740 and 1750 from plans drawn up by the monk and master architect Bücken, it was based on the Baroque concept of garden design in an Italian style.

The slope was divided into four terraces with espalier fruit, pyramid-shaped yews and vines. A curved set of steps led into the actual garden, which was given a strict formal structure by flowerbeds.

Some of the beds were used for the cultivation of vegetables and herbs. The garden design was enhanced by splendid flower parterres, plants in large pots, a colourful boscage, a fish pond and fountains. The orangery was used for cultivating exotic plants.

Following secularisation in 1802, the garden disappeared and the area was used for grazing cattle.

It was not until the period from 1986 to 1990 that the town of Kamp-Lintfort commissioned the re-establishment of the terraced gardens as they were shown in the original plans. The basis for this restoration was provided by the surviving Baroque topographical plan from the 18th century. The re-creation of the gardens adheres to the original model but also uses present-day architectonic aspects of design. The Baroque notions of order, symmetry and prestige are illustrated particularly clearly for the visitor.

The terraced garden at Kloster Kamp (Kamp Monastery) is dominated by the impressive entrance area at the top of Kamper Berg (Kamp mountain). A modern, wisteria-covered steel structure more than 60 metres long forms an arbour walk which leads from the Abteiplatz in front of the church to the upper terrace and offers a view of the whole terrain. From here visitors can enjoy the view over the whole garden and its Baroque structure – just as the abbot once did with his guests in the past. Borders of herbs and shrubs planted beneath old roses including “Charles de Mills”, “Agatha” and “Celestial” form a scented entrance area.

A total of 137 cone-shaped shrubs (privet and crab apple) alternate regularly on the terraces, which are laid out like cascades down a slope.

An elaborate flight of steps forms a central axis and leads to the parterre, which is divided up into 16 areas in a strictly linear pattern. The lawn sections of the “tapis vert” highlight the splendour of the planted areas particularly effectively. Amongst these are four ornamental beds trimmed with colourful flowers and laid out around the round pond in the centre. They are decorated with ornamental box features, the sections of which are filled with white chippings. The corner areas of the parterre are planted with yellow-stalked chard, blue hyssop, savory, sage, catmint and yellow lady’s mantle as a reminder of the vegetables and herbs which were once grown here. The conical privet plants positioned in the corners of all the areas look like sugar loaves.

The lowest terrace sweeps out to the front and features a boscage with a central fountain and basin. Today, two orangeries can once again be found at the foot of the slope. They are modern steel and glass structures, one of which houses excavated material and an exhibition on the garden’s reconstruction, the other changing art exhibitions. To the south, the parterre is adjoined by a three-part hedge boscage. Its sections are planted with round maple trees and enclosed by a high privet hedge. The parterre is lined at the sides by avenues of pyramid-shaped hornbeams.

Visiting the terraced garden of Kloster Kamp today, it is hard to believe that none of this could be seen in the mid-eighties. At that time, just a few remains of the terraces existed around the main knoll area and most of the terrain was used for farming and as grassland.

Yet in the mid-18th century the garden had been renowned beyond the region following its transformation into a prestigious Baroque complex.

At that time, the Baroque garden was sectioned into various strictly-divided areas, all of which could be seen from the prelature. The slope was divided into four terraces which curved inwards at their centres, whereby the upper three were built with supporting walls while the lower one probably ended as a steep embankment. A richly ornamented flight of steps on the central axis led down to the lowest terrace, which widened out to the front in a sweeping curve and was rounded off by greenhouses on both sides.

The steps were flanked by sandstone figures, all of which were produced at Versailles, according to an inventory list dating from 1802. Of these only one allegorical figure has survived to the present day.

The terraces were planted alternately with pyramid-shaped yews and fruit trees. Espaliers were attached to the terrace walls to support apricot and peach trees and possibly also grapevines.A levelled garden area divided up into 16 square sections stretched out below the terrace. Vegetables were planted here, possibly surrounded by narrow borders of flowers and herbs. A fountain stood at the centre of the area.

The vegetable garden was adjoined by a boscage, the curved, symmetrical sections of which were lined by hedges and planted with shrubs, probably fruit bushes. The main path led out of the kitchen garden and continued to the “mirror”, a large fish pond.

The monks left Kloster Kamp after it was dissolved by the French in 1802. The buildings were auctioned off for demolition and building material and the Baroque garden fell into ruin.

Today’s garden is therefore a completely new construction, a fact which can be seen in its use of form and which it makes no attempt to hide. However, the garden has significant features which come close to the historical original, particularly with regard to the way it is divided into sections.

Visitors wishing to get an impression of the variety of herbs planted in Central Europe should visit the herb garden in the east part of the monastery. This small-scale garden provides a contrast to the large garden to the south and enables visitors to take a more detailed look at plants, e.g. to get to know individual plants. Dr. Weller-Boothe, a doctor of internal medicine and an expert on naturopathy, maintains and cares for the attractive herb garden. She is happy to give advice to visitors. (Reservations at: 02842-475706)

The text was compiled from the following sources: 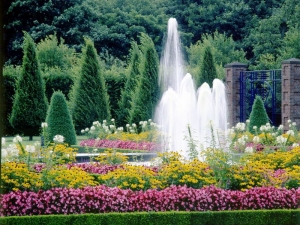 Events, programme, exhibitions:
Current information on the cultural programme can be found on the website: www.kloster-kamp.de/