You Are Here:Home / European Themes / The baroque gardens of Het Loo

The baroque gardens of Het Loo 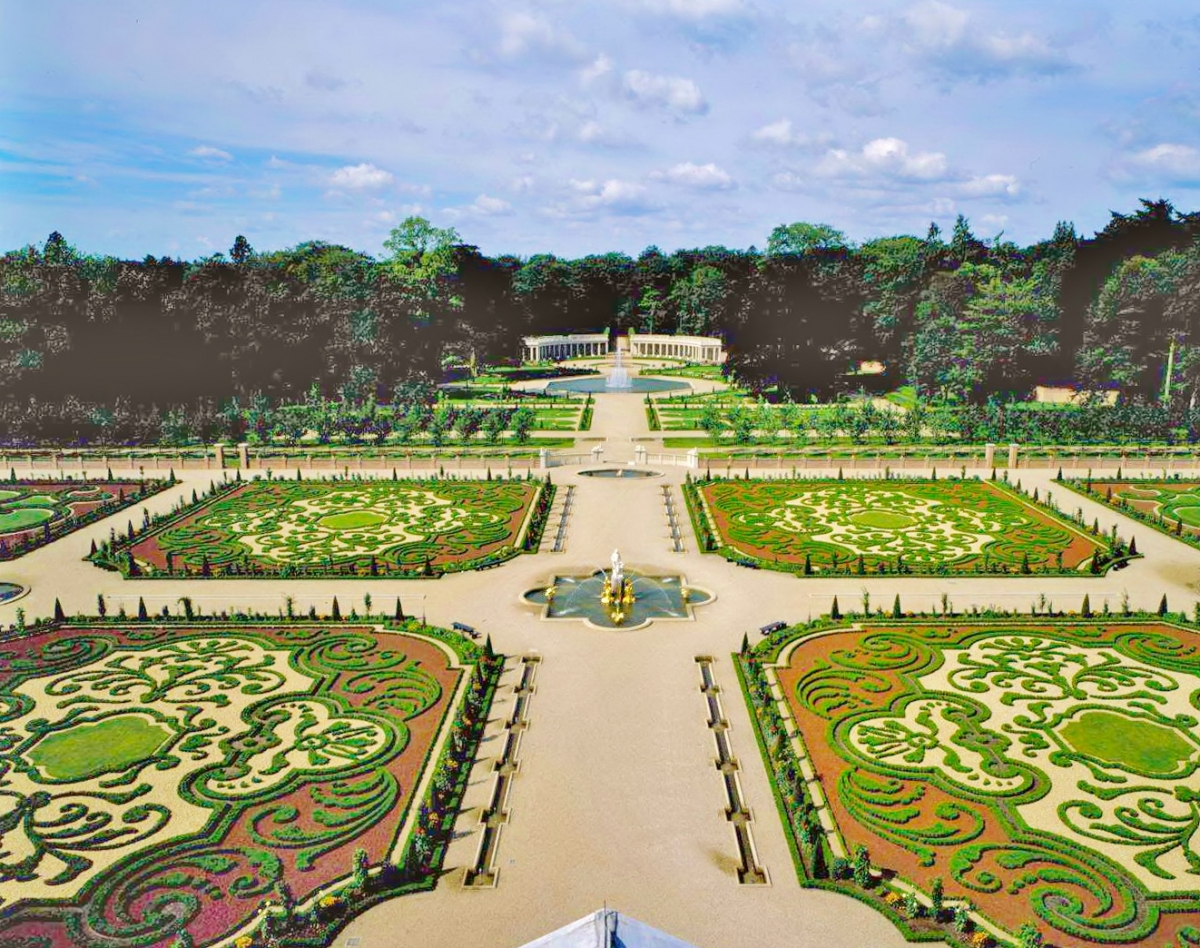 A lost garden of the 17th century revived

Het Loo was planned and created from 1686 onwards as a Gesamtkunstwerk combining a palace and baroque garden. The high level of the water table and the numerous natural springs in the area favoured the construction of fountains, canals and water features.

Various fruit trees such as apple, pear, peach, apricot, nectarine, cherry and plum grow on the south walls in espalier form, a typical element of Dutch garden design. The semicircular colonnades at the end of the park provide a magnificent view of the palace, the delicate parterres and the avenues.

Visitors can admire a large variety of old scented roses, many historical kinds of shrubs and exceptionally beautiful bulb plants. Countless stone pots modelled on historical 17th-century originals can be found on the walls. The pots are planted with various plants cultivated at Het Loo. The splendid flower displays in the palace itself are also cultivated here and are arranged lovingly by those responsible for the garden.

In summer the queen’s garden is decorated with plants from the orangery in stone pots and wooden boxes. High arbour walks of hornbeam provide seclusion. On warm days, the splashing of the fountains can be heard again and the scent of orange-tree blossoms perfumes the air.

In 1684, William III (1650-1702) acquired the mediaeval castle Het Loo in order to build a new hunting lodge on the grounds around it. By 1686, the corps de logis (central tract) had been completed, the colonnades, side wings and the garden walls had been constructed and work had begun on laying out the gardens.

Although Het Loo was built for hunting and William III and his wife, princess Mary (1662-1696), had a large number of palaces, manor estates and houses at their disposal, the building was constructed to the greatest perfection with special attention being paid to detail. Great care was also taken with the planning of the gardens. Designed as part of the same concept, the house and gardens form a united whole. The garden and the water features planned for it were of such significance than they were even of decisive importance for the location of the new hunting lodge. The low-lying site and the natural springs favoured the construction of fountains, an important aspect of garden design at the time. Originally, the plan consisted of a lower-lying square garden surrounded at the back on three sides by walls and terraces and of two smaller enclosed gardens on either side of the house.

In 1689, Prince William III and Princess Mary were crowned king and queen of England, an event which brought about the expansion of Het Loo. The colonnades were replaced by four pavilions and the garden was enlarged to the north by adding a semicircular section surrounded by curved walls. As a result, the avenue leading to the mediaeval castle came to be located between both parts of the garden, which were now given the names of “lower garden” and “upper garden”. The colonnades were relocated to the back of the upper garden and formed a visual boundary for the whole baroque garden.

Two low-lying gardens were created to the west and east of the new pavilion – the king’s garden and the queen’s garden: They were divided up symmetrically into parterres and were surrounded by paths with fountains and sculptures between them.

The focus of the lower garden was the fountain with its Venus sculpture and four swans. It was probably the most impressive of all the water features. The many parterres were planted with complicated box configurations, designed by the French architect Daniel Marot among others, and surrounded by borders which were in turn bordered by box. The borders were filled with flowering plants throughout the seasons.

There was a wonderful view of the garden from the raised terraces and it was also possible to see into the king’s and queen’s gardens by looking over the walls from the lateral terrace. A collection of plants from the orangery was placed around the parterres and along the walls in pots and tubs.

Various fruit trees such as apple, pear, peach, apricot, nectarine, cherry and plum grew in espalier form on the south walls. Besides the parterres in the king’s garden, there was also a “Klosbaan” which was used for playing “bobbins”, a game somewhat similar to golf.

Branching arbour walks of hornbeam provided cool shade in the queen’s garden on hot days. There were four small parterres within these symmetrical colonnades, each with a fountain at its centre.

Visitors leaving the lower garden and crossing the avenue to enter the upper garden came directly upon the 13-metre-high jet of water rising from the king’s fountain. The jet was able to reach this height because of the skilful engineering used at the time, which exploited the existing differences in height and guided water from the higher-lying Asselt und Orden through a system of pipes. The clean, fresh spring water emerged directly from the earth in large quantities. Many contemporaries repeatedly expressed astonishment and wonderment at so much beauty when describing the Het Loo garden.

After the king’s death, maintenance became a problem for the following generations and the garden gradually lost much of its splendour. Following the flight of William V (1747-1808) in 1795, the garden was plundered and fell into ruin.

When King Louis Napoleon (1778-1846) took over Het Loo, he commissioned the architect Dufour to draw up a plan for a larger garden. The terraces were levelled and the lower garden filled in with earth. At the time of queen Wilhelmina (1880-1962), only some traces of this garden landscape remained visible, notably in the large lawn behind the house and in various groups of trees.

After the death of Queen Wilhelmina, a decision was taken in 1970 to convert the palace into a museum. The buildings dating from the 19th and 20th centuries were removed and the palace and parts of the interior restored to their 17th century condition. This work also included reconstruction of the baroque garden.

Reconstruction of the garden was possible due to the availability of a large number of historical sources. Descriptions by contemporaries, historical engravings and drawings, bills and lists of plants gave valuable insight into the condition of the garden in the 17th century. Excavation work also brought much information to light although it sometimes deviated from the historical illustrations. The description and notes recorded by Walter Harris, William III’s personal physician, were an exceptional stroke of luck which proved to be of great value. At the request of Mary II, Harris made exact notes on everything he saw. These were published in book form in 1699.

In May 1980, reconstruction of the garden walls began and over the following years the whole stone structure which gives the park its unmistakable character was built. Experimental parterres were laid out in the palace nursery so that some experience in planting the parterres could be gained and many plants which were later used in the garden were taken from there. Research was also carried out as to which plants were common at the time and how they were planted. Many surprising things came to light during this work.

Until shortly before the opening, there was a lack of financial means to rebuild the last piece of the garden – the colonnades. However, it was possible to reconstruct them just in time due to support from business.

On 20th June 1984, the big day finally arrived: Her Majesty the Queen opened Het Loo palace. It was a very warm day and it seemed as though William III had just left the garden. The sound of splashing fountains could be heard, roses perfumed the air and the colonnades stood where they belonged, providing cool shade and a splendid view of the baroque parterres and water features for the many visitors. Almost three million people have visited Het Loo since this time.

Maintenance of the garden remains an ongoing worry despite the excellent work of those responsible. As everywhere else, there are too few garden staff. However, an optimum result is nonetheless achieved with the means available and the garden becomes more beautiful by the year.

Many mistakes from the early years have been corrected. The “suffruticosa” variety of buxus sempervirens which had been planted in the lower garden does not grow well in the Netherlands. It has since been replaced by normal buxus sempervirens. Every year, there are new plans for planting the borders which provide a colourful framework for the parterres. Some varieties are chosen from the wide range of garden plants which existed in the 17th century. As was usual in that period, these are planted far enough apart to allow all aspects of their growth to be observed.

Visitors can admire a large variety of old scented roses, many historical kinds of shrubs and unusually beautiful bulb plants. On the walls there are countless stone pots modelled on historical 17th-century originals. The pots are planted with various plants cultivated at Het Loo. The splendid flower displays in the palace itself are also cultivated here and are arranged lovingly by those responsible for the garden.

In summer the queen’s garden is decorated with plants from the orangery in stone pots and wooden boxes. High arbour walks of hornbeam provide seclusion. On warm days, the sound of splashing fountains can be heard again and the air is perfumed with the scent of orange-tree blossoms. 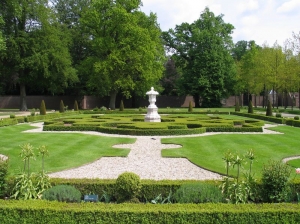 Events, exhibitions::
The house has stately rooms and is used as a museum. Stables at the entrance show historic carriages and cars. Photographs not permitted.
Actual information can be found on the website www.paleishetloo.nl