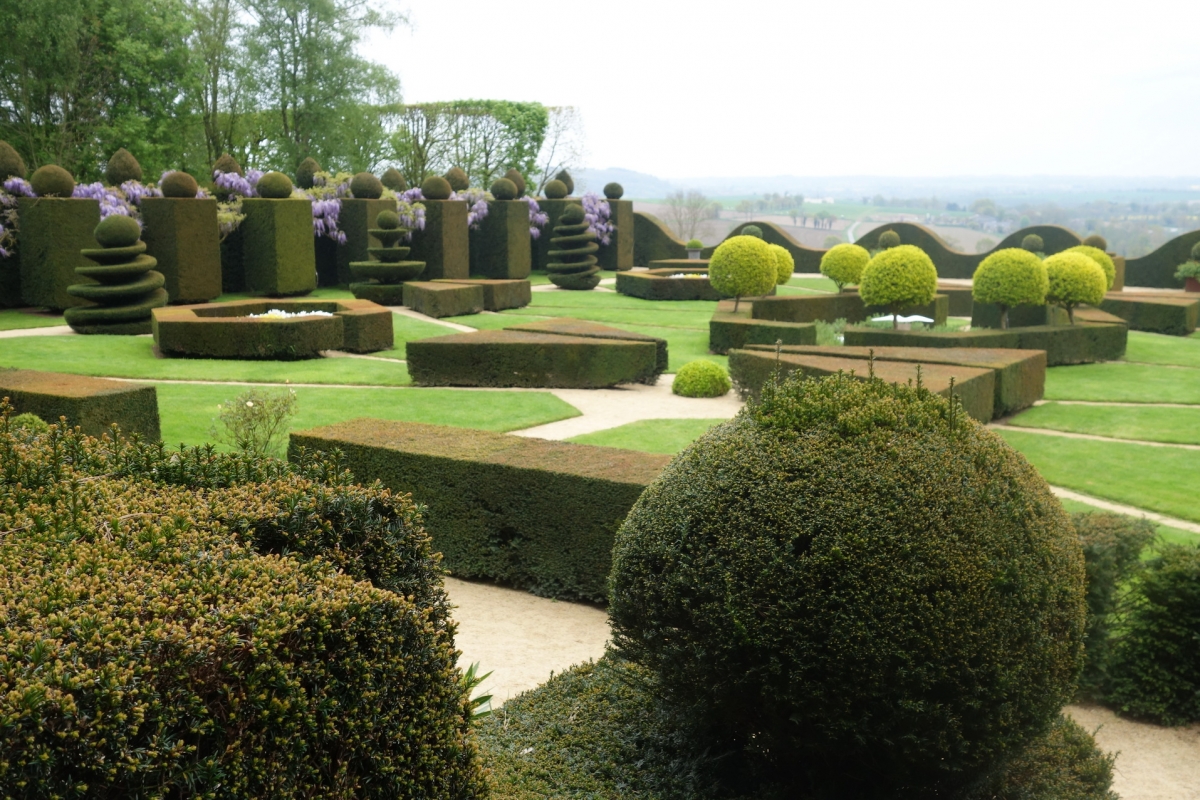 Château de la Ballue and its gardens can be found above the green valley of the Couesnon river and combine with the surrounding landscape to form a perfect unity.

The garden is influenced by mannerism and comprises
– a contemporary interpretation of topiary modelled on the 16th-century Italian practice of arte topiara and thus placed in the tradition of Baroque garden design
– a maze-like structure of mysterious avenues and passages created as a stimulus for the eyes and ears
– an intimate garden with interrupted views which is crossed by a diagonal axis
– a sequence of 13 asymmetrically arranged garden “rooms” which repeatedly surprise visitors.

Two very different gardens are arranged side by side on an area covering 2 hectares. The division between them is marked by a long wisteria-covered arcade which runs between two rows of yews clipped into columns.

The green walls of the garden “rooms” serve as a backdrop for contemporary sculpture.

The network of paths guides visitors to various areas such as the mysterious copse, the music spinney, the fern garden, the grove of scents, the green theatre, the Diana temple and finally to the maze.

Château de la Ballue and its gardens can be found above the green valley of the Couesnon river and combine with the surrounding landscape to form a perfect unity.

Separated by a wisteria-covered arcade and an avenue of yews clipped into columns, the parterre adjoins the various garden “rooms”, which were conceived by François Hébert-Stevens and architect Paul Maymont and created in a modern-age mannerist style at the suggestion of publisher Claude Arthaud.

After passing through an arch of laburnum and white wisteria, the visitor sees the magic grove through a window cut into the hedge. The name of the grove follows the tradition of literary wordplays which were so popular in the 17th century. It is a reference to the film “A Room with a View” by James Ivory. The story is set in Tuscany, and on closer inspection one can see that this landscape resembles Tuscany – even cypresses grow here.

Evergreen ferns flourish in the shade of a magnolia grandiflora. Large areas covered in ferns attracted numerous glass manufacturers from Murano to the region in the past because fern ash has the effect of reducing the melting temperature of the glass mass. This is also the reason why a glass factory was founded at la Ballue in 1808.

The “Garden of Movement” consists solely of topiary shrubs: boxwood, yews and holly are clipped into the shape of balls, cubes, cones and spirals. The gentle undulating forms are emphasised by the foliage of lady’s mantle (Alchemilla), the leaves and flowers of which are reminiscent of ruffled sea waters with crests of spray. This garden is filled with radiant light when the Alchemilla is in flower.

The “grove of scents” with its circular and triangular niches is reminiscent of mediaeval chancels. At its centre is an octagonal water basin planted with water lilies. Scented plants are grown in pots while jasmine and honeysuckle twine and trail beside them.

The “hinge” connects the two staggered diagonal axes. A view framed by a cherry laurel hedge opens out into the countryside at this point.

The “diagonal axis” is framed by thujas. It leads through a green tunnel which broadens out on both sides to form semi-circular spaces surrounded by cypresses. The particular charm of this garden is provided by the mysterious play of light and shadow.

The “green theatre” is a semicircular space with walls of yews clipped into the form of waves. Used as an open-air theatre, it has four side entrances to the stage, a green backdrop and a lawn podium.

The Diana temple was modelled on works by the architect Claude-Nicolas Ledoux (1736-1806). Visitors are invited to stand on the slab in front of the garden. Both avenues can be seen from here – the thuja avenue to the right and the linden avenue to the left.

The linden avenue affords a view into the Couesnon valley. It has been clipped into canopy form again since 2006, the crowns of the trees joining to form a roof.

The “music spinney” is a space surrounded by high green walls where visitors can listen to birdsong, the rustling of leaves and other sounds of nature.

The maze is a hidden room within a room. Here visitors are prompted to question not only the logic inherent to the garden but also their own perception.

A highlight of the garden is the 50-metre yew avenue clipped into columns, the roof of which is formed by 22 wisteria plants wound into garlands. The play of light and shadow is spectacular, particularly when the plants are in flower.

The classical parterre designed by François Hébert-Stevens emphasises and harmonises with the architecture of the château’s south facade from the time of Louis XIII. The formal parterre is laid out above all with a view to its optical effect when seen from the château above. Here nature is ordered according to the rules of logic and mathematics – a geometrical game of paths, triangles and hexagonal intersections. Vertical markers are created by balls of boxwood and tall golden privets. The garden continues out into the landscape, and the landscape is part of the garden. Through the Venus gate, the visitor arrives from the parterre into the “garden of doves”, the moat garden.

The cour d’honneur is a symmetrically designed garden area which emphasises the château’s north facade. Its west side is bordered by three linden trees approximately 250 years old.