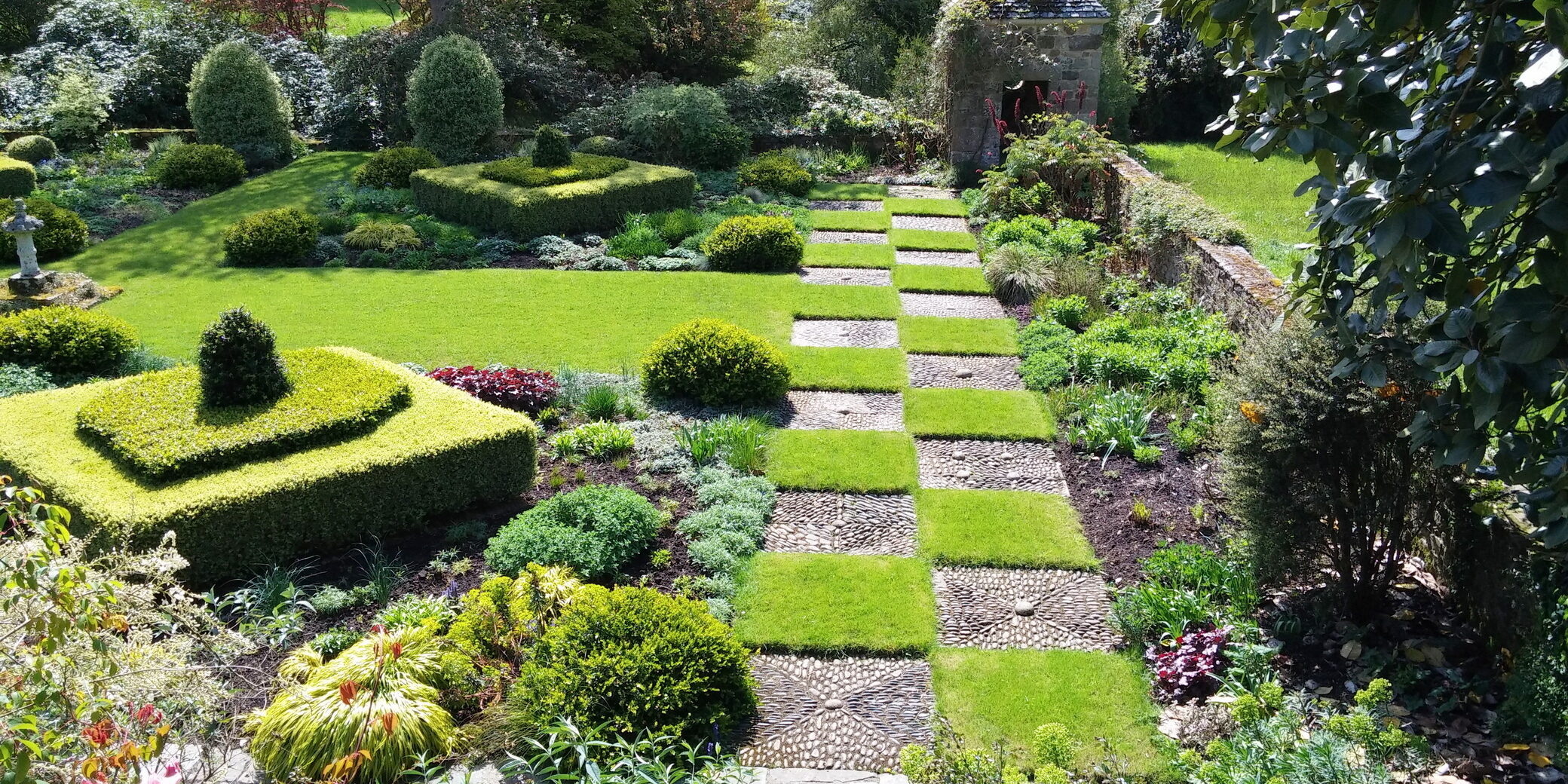 The Gardens of Kerdalo were developed in 1965. They owe their existence to the creative imagination and artistic talent of Peter Wolkonsky, who was fascinated by the acidic soils and hilly terrain of an old farmstead overlooking the Jaudy river.

“Kerdalo is a fragile world; it is at the mercy of the weather, climate change and pollution. It is a magical world which is introspective, secretive and arcane, and it is both natural and designed. The botanic and romantic universes meet here.” (Peter Wolkonsky)

Peter Wolkonsky was born in St. Petersburg in 1901. He devoted some time to painting with his mother, mostly in Italy and Provence. In the following period, he dedicated himself to the design and creation of gardens.

In 1965, Wolkonsky began with the realisation of Kerdalo on the hilly terrain of an old farmstead overlooking the Jaudy river and opposite the historical town of Tréguier. Ponds, waterfalls, a grotto and pavilions were constructed. Plants were selected on the basis of their botanic rarity and above all their colour with the help of well-known gardeners such as Harold Hillier from Winchester. More than 5,000 plants found their way into the 17-hectare area in this way.

After Wolkonsky’s death in 1997, his daughter Isabelle and her husband Timothy took on care of the gardens. Despite the severe weather of 1999, flooding, the reduced level of the water table and intermittent dry periods, today’s gardens have been restored to their full glory again.

The Canal
A square pond was created at the centre of the Asian-inspired garden. A wooden pagoda at one of its corners catches the eye. But it is not until autumn that a wall of flaming red unfolds: Vitis coignetiae(crimson glory vine) rounds off this season beautifully.

Exochorda x macrantha ‘The Bride’ bedecks itself with numerous small white blossoms in spring while Magnolia soulangeana ‘Brozzonii’ and Magnolia sprengeri ‘Diva’ proudly show off their pink and white finery.

The Grotto
Wolkonsky discovered Italian gardens when he was young, one of the defining features of which is the soothing presence of water and grottos. The grotto was constructed in this spirit. A mystical atmosphere is created here by the marine creatures fashioned out of seashells which decorate the walls. This effect is heightened by the huge leaves of Gunnera manicata (giant rhubarb) throughout the summer.

The Golden Heath
This part of the garden, which was covered in broom and gorse, originally caught the painter’s eye due to its golden colouring.

Today, all these specimens dating back more than 40 years combine to make the “Lande Dorée” (Golden Heath) look like a Wolkonsky painting.

The Four Squares
The old vegetable garden, which initially served as home to Wolkonsky’s iris collection, was re-conceived and re-designed by Timothy Vaughan between 2002 and 2004 as a result of the floods of autumn 2000.

Visitors on the terrace in summer can enjoy a palette of pink (Penstemon ‘Evelyn’, Persicaria affine, Allium sphaerocephalon, Salvia x superba ‘Tänzerin’) and blue (Geranium ‘Rozanne’), accentuated by a few dashes of yellow (Hakonechloa macra ‘Aureola’). The terrace’s raised position not only gives visitors the opportunity to admire the geometrical forms and symmetries but also affords a sweeping view of the “Lande Dorée” in the distance.

Spring heralds its arrival on the terraces with yellow-green hues, but is at its most impressive when Acacia pravissima comes into bloom.

Summer brings an explosion of colour: the red and yellow of Crocosmia ‘Lucifer’ and ‘Paul’s Best’ mingle with the silver-grey foliage of Melianthus major (honey flower), while the white flowers of Hoheria sextylosa blend with the yellow of Kniphofia ’Green Jade’. The flowering period of Beschorneria yuccoides should not be missed. Both Echium pininana and Cupressus sempervirens add a touch of verticality.

The Lower Valley
The path to the lower valley runs along the large pond as far as the dam. It forks just beyond the Drymis lanceolata.

Lysichitum americanum (yellow) and Lysichitum camtschatcensis (white) are the first plants to flower at the beginning of spring. Then it’s the turn of Gunnera manicata. Some Dicksonia antartica at the edge of a small stream add a vertical component. The flowering period of the azaleas and rhododendrons from May onwards is particularly spectacular in this part of the garden.

A veritable jungle develops here in summer: The flowers and gigantic leaves of Gunnera manicata mingle with Matteucia struthiopteris, astilbes (false spirea) and the leaves of lysichitons.

The Gardens of Kerdalo were awarded the title “Jardin Remarquable” in 2005 and added to the inventory of “Monuments Historiques” in 2007.