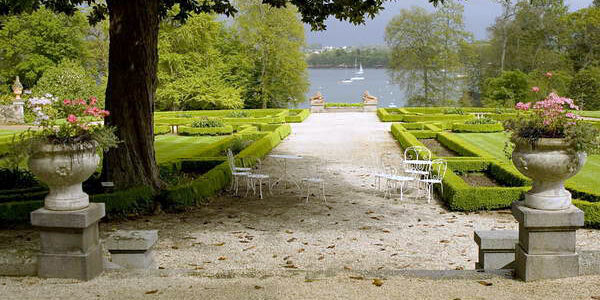 Château du Montmarin is located near Dinard and Saint Malo. It is an elegant building in Louis XV style, the roof structure of which is reminiscent of the upturned hull of a ship. Montmarin is one of the few surviving malouinières (manor houses) on the left bank of the Rance river. The château is reached by crossing the plain cour d’honneur, which is dominated by a splendid fountain of cararra marble.

The park – already highly praised by Chateaubriand – descends to the Rance over four terraces. A French garden and vegetable garden dating from the 18th century are adjoined by a 19th-century romantic park in the style of the Bühler brothers. This remarkable ensemble covering almost six hectares is landscaped wtih lawns, trees and shrubs, rockeries, numerous botanical collections and herbaceous beds as well as the famous aganpathuses which can be admired in July and August. The gardens have been awarded with the distinction “Monument Historique” and “Jardin remarquable”.

The Gardens of Montmarin cover an area of more than 6 hectares. Gardens form an integral part of any malouinière. Today, the surviving parts of the original park comprise the French garden accentuated by a majestic Magnolia grandiflora over 200 years old, an enclosed vegetable garden surrounded by clipped linden trees, and four terraces which descend to the Rance river.

The entire remaining terrain was re-designed at the end of the 19th century in the style of the Bühler brothers. Here the visitor discovers lawns whose rounded edges are shaped by the network of paths, flowerbeds, shrubbery, and numerous venerable trees (among them a Ginkgo biloba sapling).

Montmarin’s maritime tradition, its favourable climate and the owners’ passion for botany are the reasons behind the enormous range of plants to be discovered on a visit to the garden. A rockery created around the year 1920 on the bank of the Rance by the present owner’s grandparents is home to a collection of exotic plants. Numerous further plants were added during the restoration work of 2011. Montmarin has not been spared the effect of war and severe weather, but events of this kind have always been followed by extensive re-planting. The garden has also been continually enhanced over the years with further exceptional botanical collections.

In 1987, the family organised “Rare Plant Day” for the first time and also opened the tree nursery to the public. Christian de Ferrand founded the “Association des Parcs et Jardins de Bretagne” with some friends in 1988. The restoration work in the garden was awarded the 2nd Prix Bonpland in 1992. The garden has been recognised as a “Monument Historique” since 1995.

Isabelle und Thierry de Ferrand – the fifth generation here – called “Agapanthus Days” into being. In 2005, the garden was awarded the title “Jardin remarquable” by the Ministry of Culture. The restoration of the gardens was recognised with the “Prix Villandry” in 2009.