You Are Here:Home / European Themes / The Gardens of the Royal Castle in Warsaw

The Gardens of the Royal Castle in Warsaw 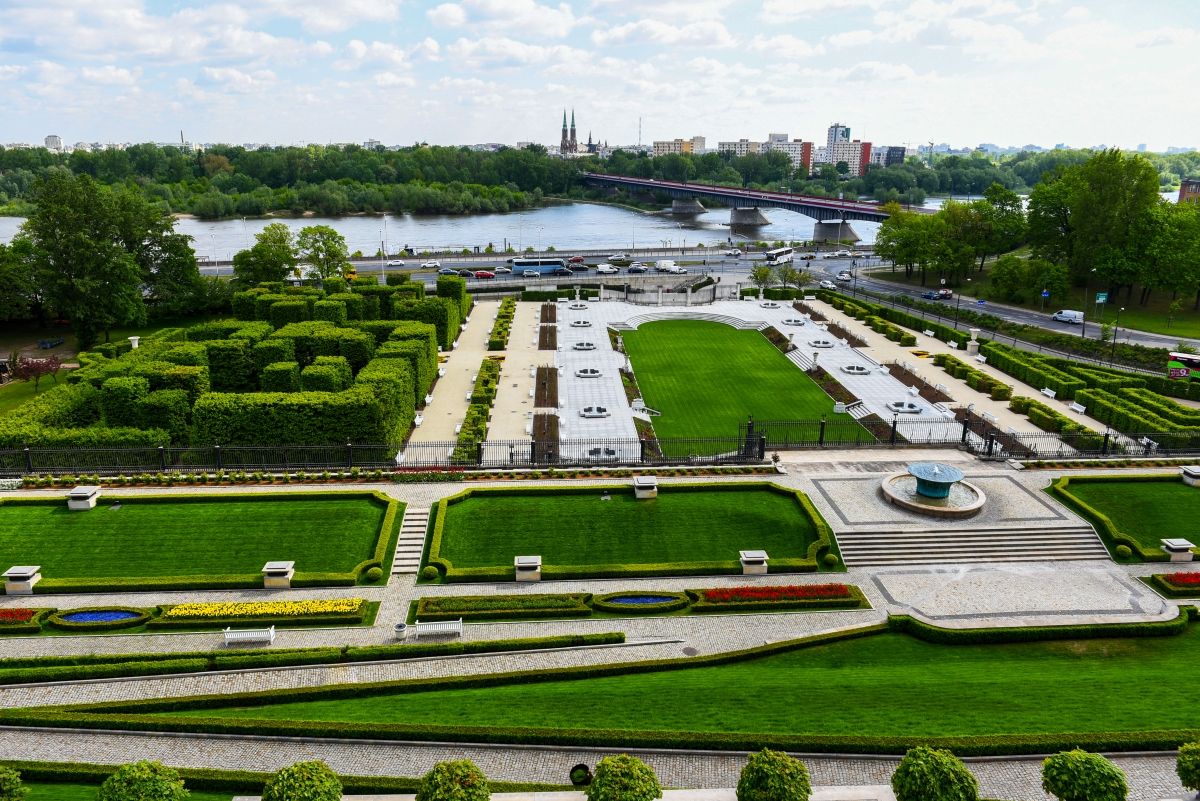 The Upper Garden covers an area of 10,000 square meters and is located on the roof of the Kubicki Arcades.  The Kubicki Arcades, through which there is a hidden passage, form the physical separation between the two gardens. The Upper Garden is a kind of roof garden, its proximity to the castle making it seem like an extension of the building.  The sloping lawn has an incline of 60 degrees at its steepest point. The grounds are stately and impressive, and are typical of the interwar period in style.

The heart of the garden is formed by the lower fountain on the longitudinal axis running to the castle and throughout the gardens.  The fountain consists of a sandstone basin with a patinated bronze goblet in Art Deco style. It is complemented by a smaller fountain directly near the castle. Symmetrical paths with granite paving run diagonally across the slopes on either side of the axis. The sandstone pedestals, each of which bears two vases planted with seasonal flowers, are characteristic of the gardens. Seasonally planted beds surrounded by boxwood and a row of benches can be found in the “Small Valley” at the foot of the slope.

Boxwood hedges and seasonal plants dominate much of the gardens. An important feature is the collection of large flowering roses, a line of which runs to the Upper Garden. 88 flowerpots with patterns from Canaletto paintings are arranged on the garden terrace next to the castle. The so-called “Triangular Garden” (Wasa Garden), which is especially dedicated to the Baroque period, can be found in the southern part of the gardens. Boxwood laid out decoratively in complex patterns around annual plants can also be found here along with small rose trees.

The Lower Garden of the Royal Castle (about 19,000 m2) extends from the banks of the Vistula River to the east of the Kubicki Arcades. It forms the garden area which dates back at least as far as the beginning of the 19th century. The restoration work was completed in 2018.

The concept for planting the garden: boxwood, hornbeam, yew, roses and annual shrubs.

The shaped hedges of hornbeams (Carpinus betulus), known as “boskets”, date back to the pre-war period and form the most important element of the Gardens of the Royal Castle. The approximately 80 trees which survived the war formed the basis for the historical reconstruction of the gardens. The surviving trees were originally planted in 1937. The hedges are up to 6.5 metres high and provide habitats for many protected bird species.

Particularly noteworthy is the collection of large flowering roses of the Kordes, Tantau and Meilland varieties (‘Gospel’, ‘Leonardo da Vinci’, ‘Madame Anisette’, ‘Chippendale’) along with the ‘Duftfestival’ rose trees.

The upgrading (reconstruction process) of the Lower Garden with its historical roots is now complete.  More than 1,300 cuboid-shaped hornbeams (Carpinus betulus) and European beeches (Fagus sylvatica) forming new axes and up to 3.5 metres in height have been added to the shrubs.  Hedge cotoneasters (Cotoneaster lucidus), over 60 varieties of perennial and the widest possible range of plants were also included.

The overall concept will be completed by 12 fountains positioned symmetrically on both sides of the garden’s longitudinal axis.  The lower garden will also be home to 25 sculptures, 10 vases and more than 100 benches. The lighting, which enhances the garden at night, plays an important role.

The completion of the work in the Lower Garden marks the end of the restoration process of the Gardens of the Royal Castle, which now present themselves to visitors as a Gesamtkunstwerk – an artistic synthesis of history, aesthetics and landscaping.

Therefore, the Royal Castle in Warsaw together with the Castle Gardens is not only an object located in the area included in the UNESCO list, but also sets a time frame for the reconstruction of the Old Town in Warsaw; is one of the most important elements of the entire reconstruction.

Revalorisation project for the Lower Garden

The revalorisation project aims to restore the artistic and historical values of the Castle complex seen from the river. Reactivating the garden, primarily in the wake of the nineteenth and twentieth-century iconography, will make it possible to supplement the panorama of Warsaw from the Vistula river with an important element that has been missing so far. The basis of the Castle view below the Kubicki Arcades will be a varied, green space with various garden assumptions. On its northern side there are already richly decorated rakes. On the south side of the lower garden there are plant forms imitating the full symmetry of the garden and park

The designed Lower Garden refers to the period when, after regaining independence, and shortly before the outbreak of World War II, the renovated castle garden received a robe full of glamor based on the design of the outstanding architect Adolf Szyszko-Bohusz. Traces of this pre-war assumption have survived in the post-war photographs of the ruins of the Royal Castle, and some planting trees from this period have survived to this day.

The most important element of the reconstructed Garden is a grass-like indenter formed in the shape of a garden amphitheatre planted with many species of perennial plants. The granite stairs lead the observers to the higher part of the gardens enclosed in moulded beech logs.

Hedges from cotoneaster also spice up planting. The oldest plant form are hornbeam bosquets with a height of over 6,5 m. They should be located on two sides of the garden axis, however, the transformation and development of the city made it impossible to recreate the southern part of the bosses. They are played only to the extent possible today.

A report about the opening of the Lower Gardens on 11th May 2019 can be found here.

Historic context of the garden

The gardens have always been an important part of the Warsaw residence. Above all, however, they played an important role in the panorama of Warsaw from the Vistula side. In 2013, construction and conservation works were initiated to restore the perfect form of the completely damaged gardens, thereby completing the reconstruction of the Castle.

The garden shows us its form for the first time in materials from 1581. As a result of the extension of the Castle by Sigismund III Vasa at the turn of the 16th and 17th centuries, the towers of the Castle and a mighty wall with bastions appeared in the landscape. The garden had to give way to construction projects and was limited to a small space at the top of the escarpment. The king was a lover of plants and gardens, as did his sister Anna, and later daughter-in-law Cecylia Renata, who moved to Warsaw a great horticultural tradition of Florence, Mantua, Prague and Vienna. However, to create a magnificent garden, the area was lacking. King Stanisław August Poniatowski obtained it, commissioning works consisting in filling up a part of the river bed under the scarp. The terrace of the Castle was then decorated with trees arranged in two rows planted in pots painted in the colours of the royal coat of arms Ciołek. This decoration has been reconstructed according to Bernardo Bellotto’s painting ‘View of Warsaw from the terrace of the Royal Castle’.

On the Vistula River, the Garden was created only at the beginning of the 19th century. It was decided that this place, threatened by floods, will be decorated as a park – admittedly connected with the Castle, but public. For the implementation, Jakub Kubicki’s concept was selected from among several projects. The works that lasted from 1818 to 1830 led to the creation of a garden on the escarpment and under the escarpment, as well as the concealing of the old and still-needed urban street in the terrestrial tunnel that separates them. This tunnel, known as Kubicki Arcades, was an innovative solution to the communication problem, and at the same time was an original garden structure, on which the vault was made a “hanging garden”, compared then to the gardens of Semiramide. After the November Uprising, the surroundings of the Castle quickly gained military traits. In the inter-war period, efforts were made to restore the splendour of the devastated mansion.

In 1937, work began in the garden. The final form of the project was given by Adolf Szyszko-Bohusz. At that time, a garden was created that processed baroque forms, with a huge recessed lawn in the middle and four formed bosquets on the sides. The outbreak of World War II did not allow to finish the works, and especially to create two avenues of fountains and a garden theatre. Blowing up the Castle did not disturb the garden.

Unfortunately, the expansion of the road network after the war resulted in the removal of one-third of its surface from the Lower Garden. On this reason, the trees of two bosquets were cut down. However, the remaining two survived. Eighty hornbeams testify to the pre-war past of the place. This relic – extremely valuable for the castle complex, almost completely destroyed – determined the direction of the current revalorisation of the gardens. They are to refer to interwar stylistics, both in the composition of space following the drawings of Szyszko-Bohusz, as well as in stone details, a bronze fountain, garden furniture or the selection and composition of plants.

Owner:
The state of Poland, Ministry of Culture and Heritage

Entry:
There is free admission to the Upper Garden and Lower Garden. The gardens are accessible only through the castle.

Cultural program and events:
There is a wide range of attractions, exhibitions and events. For actual information, refer to: zamek-krolewski.pl

Dogs: Dogs are not allowed