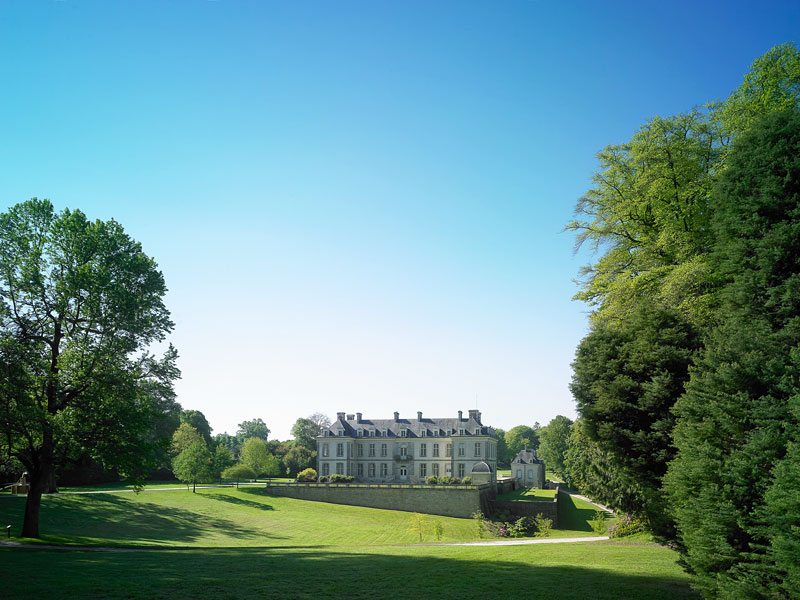 Architecture and landscape are closely interwoven at Domaine de Kerguéhennec. The park, which has been home to a sculpture path with many works by important 20th-century artists since 1986, is both a recognised cultural monument and a park which was laid out in the 19th century as a landscape garden.

Kerguéhennec is characterised by two distinct garden areas. To the south, a path running along a stream reveals a “wild” landscape where human traces tend to disappear. To the north, the landscape park features a shady promenade at the heart of domesticated and consciously presented nature.

For many years, history lost sight of the contribution made by 19th-century landscape architects. And yet the majority of public gardens which have survived to the present day date from this period, among them a large number in France attributed to the Bühler brothers. These two landscape architects had a considerable influence on the morphology of numerous parks such as the Parc de la Tête d’Or in Lyon and the Parc du Thabor in Rennes. As brilliant designers with a profound knowledge of the plant world, they followed strict principles of landscape design, the conceptual unity of which gave rise to the term “Bühler style”. The landscape park at Kerguéhennec bears the hallmark of both these landscape architects.

Featuring a sculpture path in an artistically designed landscape park, the Domaine de Kerguéhennec creates a link between cultural heritage and contemporary design.

The Domaine de Kerguéhennec was founded in the Middle Ages. At that time it was essentially an agricultural estate, covering an area of over 1000 hectares at its peak. In the 19th century, the property passed into the ownership of Count Paul-Henri Lanjuinais, who began redesigning it extensively in 1872. The works which were carried out on the essentially rural estate transformed it into a place of prestige and impressive style. Ernest Trilhe, a famous architect of the period, was commissioned by the count with the transformation of the château. As was fashionable at the time, the park was laid out as a landscape garden, thereby underlining a sense of social and political affiliation.

The count engaged landscape architects Denis and Eugène Bühler, who had become known due to their design of Parc de la Tête d’Or in Lyon. For the count, it was a case of demonstrating his adherence to the new sensibilities of the age regarding the sympathetic treatment of the landscape. A landscape park in keeping with the fashion of the Second Empire was viewed favourably by the emperor and also attracted electoral votes. Within this context, the Bühler brothers used the château as a starting point for the park’s striking design. To the south, a “French garden” adorned the cour d’honneur. To the north, the landscape park provided romantic views over the countryside.

The landscape park is conceived as an enclosed area. Its clearly defined limits are profusely planted in order to create distance from the surrounding agricultural world. Within this space, the garden is designed to evoke strong emotions in visitors. The landscape architects used curved avenues and vistas to provide poetic walks. They treated the landscape like set designers, seeking to create lively impressions for the visitors’ senses and imagination.

Another feature of the landscape park is its exoticism: exotic plants, some of which were introduced in the 17th century, are positioned so as to create an extremely scenic view of nature. The landscape architects used the trees as a unity, placing a focus on them the whole way along the path. Botanical paths in parks became a trend during the 19th century and Kerguéhennec is no exception in this regard. In the arboretum, visitors can admire giant sequoias, a sweet gum tree which is fiery red in autumn, and many types of conifers from Asia which provide the park with a “green mantle” throughout the year.

In contrast to the “French garden” with its strict regularity, the landscape park tries to give an impression of “wild” nature. The movement of water is one of the most important elements in this design. At Kerguéhennec, the natural course of the la Claie river runs through the park. A lake was created along the river in 1977.

Acquired by the Département du Morbihan in 1972, the Domaine was recognised as a cultural heritage site in 1988. Similarly, the château is classified as an historical monument while the park has protected status as an integral part thereof.

The encounter between art and landscape
The park of Domaine de Kerguéhennec is also a well-known venue for the presentation of contemporary sculpture. Created as a sculpture park from 1986 onwards on the initiative of the Ministry of Culture, the Direction regionale des affaires culturelles (Drac Bretagne) and the Fonds régional d’art contemporain (Frac Bretagne), the park brings together almost thirty works by major artists. An encounter between art and landscape thus develops in the form of an echo or a counterpoint. The works, most of which were designed especially for the park, belong to various public collections: Fonds national d’art contemporain, Fonds régional d’art contemporain (Frac Bretagne) and Département du Morbihan.

Events, exhibitions: Sculptures in the park, permanent and changing Exhibitions in the château