You Are Here:Home / European Themes / Tjolöholm – A castle garden by the sea

Tjolöholm castle is situated by the sea, in a hollow protected by cliffs. The castle environment differs undeniably from the surrounding archipelago landscape, and the sea’s proximity is ever present. Lars Israel Wahlman’s designs for both castle and garden are inspired by the Arts and Crafts movement. He used hedges and walls to create individual spaces, and terraces to link the strict garden to the wilder countryside that surrounds it.

The design of Tjolöholm’s castle gardens and parkland for James Fredrik Dickson and his wife Blanche was architect Lars Israel Wahlman’s (1870 – 1952) most prestigious private garden commission. Tjolöholm Castle has an amazing environment, thanks to Wahlman’s, apparently economically unrestricted, design.

A house without a garden was an unfinished work, according to the architect Wahlman. For him it was an architect’s duty to design the garden as a continuation of the house. Like the castle, Wahlman’s garden is inspired by the Arts and Crafts movement. He used hedges and walls to create individual spaces, and terraces to link the strict garden to the wilder countryside that surrounds it.

The new castle garden was planned in 1900, and today few signs of the previous garden remain. The lime hedge that follows the road up to the castle was presumably planted during the 1700’s and some of the original limes still remain, while others are from the end of 1800’s. The walls that run down towards the large lawn come from the previous garden.

The large lawn to the north of the castle originally housed a glasshouse, vegetable gardens, flowerbeds and an irrigation dam. Peaches, nectarines and grapes were grown in the glasshouse. Produce that wasn’t used at the castle was sent to the apartment in Gothenburg or to Stockholm where Blanche Bonde lived.

In recent years there has been a continuing work to emphasize the British feeling in the castle and the garden, by creating new and by replanting existing flowerbeds, in more English-inspired style.The English designer couple, Helen and James Dooley has made the drawings.

The rose path has been renovated by putting up new arches in solid iron. Wider borders have been created with a variety of plants that are clearly English inspired. There are also plans in the near future to create the two knot gardens, near the rose path, which Wahlman has made detailed drawings to.

Blanche Dickson also built a village with worker’s cottages in the National Romantic style. Her unquenchable ambitions turned the estate into a complete community. She built a castle church, and a town hall where the estate’s workers could meet. The estate evolved into one of Scandinavia’s leading Arts and Crafts properties.

In the worker’s village there is a new garden connected to the museum cottage, Hemtrefnaden, which will serve as a show garden. Here different kinds of plants and vegetables that were used in the beginning of 1900’s are shown. The idea by then was that the workers would be self-sufficient and that they would be able to use their free time to rest in the garden. It also shows that the arts and craft were important elements at this time – at least for them who could afford it. 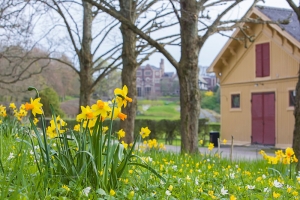 Opening times: The castle gardens are always open for visitors. The castle can be visited daily during the summer, during the other seasons on weekends only. See website for details.

Customer services:
Tea Room / Restaurant on site: Storstugan Restaurant is open daily during the summer and on weekends during the other seasons.
Shop: The castle shop and visitors centre is open daily during the summer and on weekend from November – April.
WC: Yes
Parking: Large parking areas, parking fee 30 SEK
Seats, benches: Bench seating can be found throughout the park. There is also a large grass areas for picnics.
Average visiting duration: 2-3 hours including visit to the castle.
Accessibility: Some areas of the gardens are unsuitable for wheelchairs.
Children’s programme: Childrens shows, guided tours for children and a fancy dress closet during the summer. Play area by the beach.

Map of the site, additional information: Maps of the estate by the parking areas.