You Are Here:Home / Gardens / Wasserburg Anholt 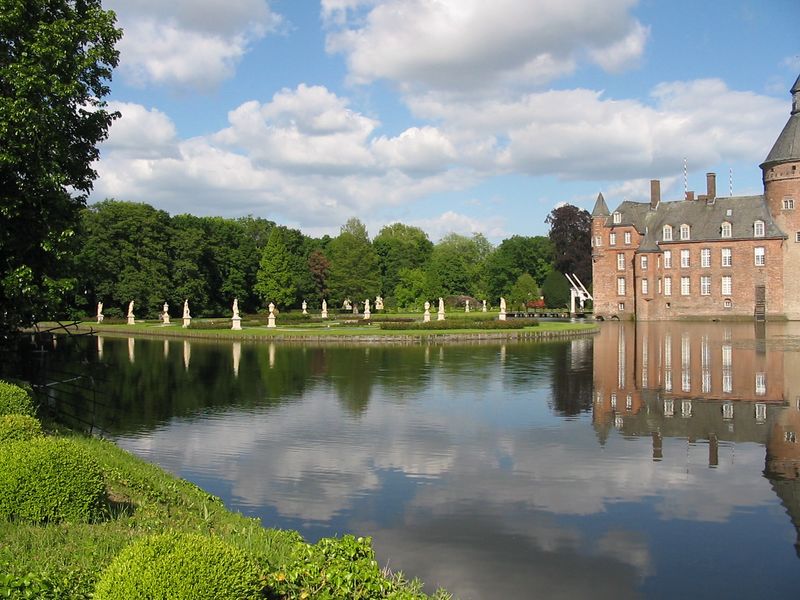 Schloss Anholt (Anholt Castle) is one of the largest moated castles in Westphalia and is located in the westernmost part of the Münsterland, near the German-Dutch border.
The history of the park and grounds at Schloss Anholt can be traced back to the 16th century. The Baroque gardens were created around 1705 while in the 19th century, the grounds were developed in the style typical of English gardens by Maximilian Friedrich Weyhe, a garden architect from Düsseldorf.

Following devastation and extensive destruction during the 2nd World War, the castle was rebuilt and the grounds were recreated from 1964 onwards on the basis of Baroque models. Today, the water garden, the boscage, the canal garden, the maze and the wild meadow offer visitors a charming combination of styles – Baroque garden design and English landscape design.

The “Anholter Schweiz” (“Anholt Switzerland”) at short distance from the castle is a further attraction. Numerous visitors come to see the biotope game park, which is set in an artificially created landscape modelled on the area around Lake Lucerne in Switzerland. Visitors can see native animals and plants in their natural environment along the signposted routes.

Wasserburg Anholt (Anholt Moated Castle) and its charming grounds are located in the extreme west of today’s district of Borken, near the German-Dutch border. In 1645, Schloss Anholt (Anholt Castle) came into the possession of the Prince of Salm and since 1811 it has been the main seat of the Princes of Salm-Salm.

The forecastle on the island took on its present appearance in the 17th century. It consists of three wings facing towards the main castle.

The forecastle is approached from the west, the driveway passing over a wooden bridge and through the tower gate with its striking onion-domed tower. At the beginning of the driveway to the forecastle, one finds two mill buildings dating from the 18th century on either side of the stream flowing out of the castle lake. A statue of St. Nepomuk stands on the bridge between the two water-mills.

The interesting development of the gardens and park is linked to the increasing importance of the castle as a residence. A French-style “pleasure garden” was created around the northern part of the castle as far back as the early 18th century, for example.

The “water garden” on a rectangular island in the lake is considered to be the oldest part of the park. Following destruction in the 2nd World War, this part of the garden was replanted as a rose garden. It also became the new home for Baroque figures of gods and vases. The sculptures depict the four times of the day and the four seasons while the vases represent fertility and the profusion of nature.

The boscage to the north of the castle is linked to the castle by a drawbridge. An important element of a classical Baroque garden, it was reconstructed in the 1990s in typical French style. The figures in the boscage include a life-sized statue of a rider and a falling Amazon.

The “canal garden” to the north-east of the castle features a teahouse and sandstone figures portraying the signs of the zodiac. It too is part of the older garden. This garden is reserved for private use only and is not open to the public.

In 1816, these “old” parts of the gardens were redesigned in the style of an English landscape garden in accordance with the spirit of the 19th century. This was done under the direction of Friedrich Wilhelm Weyhe, a landscape architect from Düsseldorf.

In 1858, the English landscape gardener Edward Milner carefully reworked Weyhe’s design and added further areas of water and lawns as well as a deer garden with a long avenue.

The island in the expanse of water to the east of the castle provides an eye-catching splash of colour, particularly when the rhododendrons are in bloom.

The maze, which was planted as recently as 1987, has proved itself to be a popular spot in the park. It was created as a reference to a maze, which once existed in the boscage.

Today, the gardens have been reconstructed in their original Baroque style. They are distinguished above all by the juxtaposition of areas featuring various eras of garden design. A walk around the grounds is thus simultaneously a small journey through the history of the Anholt gardens. If this is done in spring, the visitor has the additional pleasure of finding a sea of blossoms in the flowering meadow. This is located in the part of the garden that was designed as a landscape in 1998.

The “Anholter Schweiz” (“Anholt Switzerland”), which is located approximately 5 km from the castle outside the park, is another distinctive landscape. Prince Leopold of Salm-Salm had a copy of Lake Lucerne in Switzerland created here at the end of the 19th century as a reminder of his honeymoon, complete with a “Swiss House” and a rock landscape. The materials used for creating this part of the park – stone and wood – were transported from Switzerland to the Lower Rhine by ship and horse-drawn cart especially for this purpose.

Today, the approximately 56-hectare park is home to the “Biotopwildpark Anholter Schweiz” (“Anholt Switzerland Biotope Game Park”). Spacious aviaries and enclosures housing native wild animals can be found along the 6-kilometre network of routes. The park is a popular destination for families with children.

Events for children and young people: no

Map of site and additional information:
Leaflet and map available in the museum

How to get there

By car: Motorway A3, exit 6 (Bocholt-Rees-Isselburg)
By train/bus: Train stations in Bocholt, Millingen  and Empel