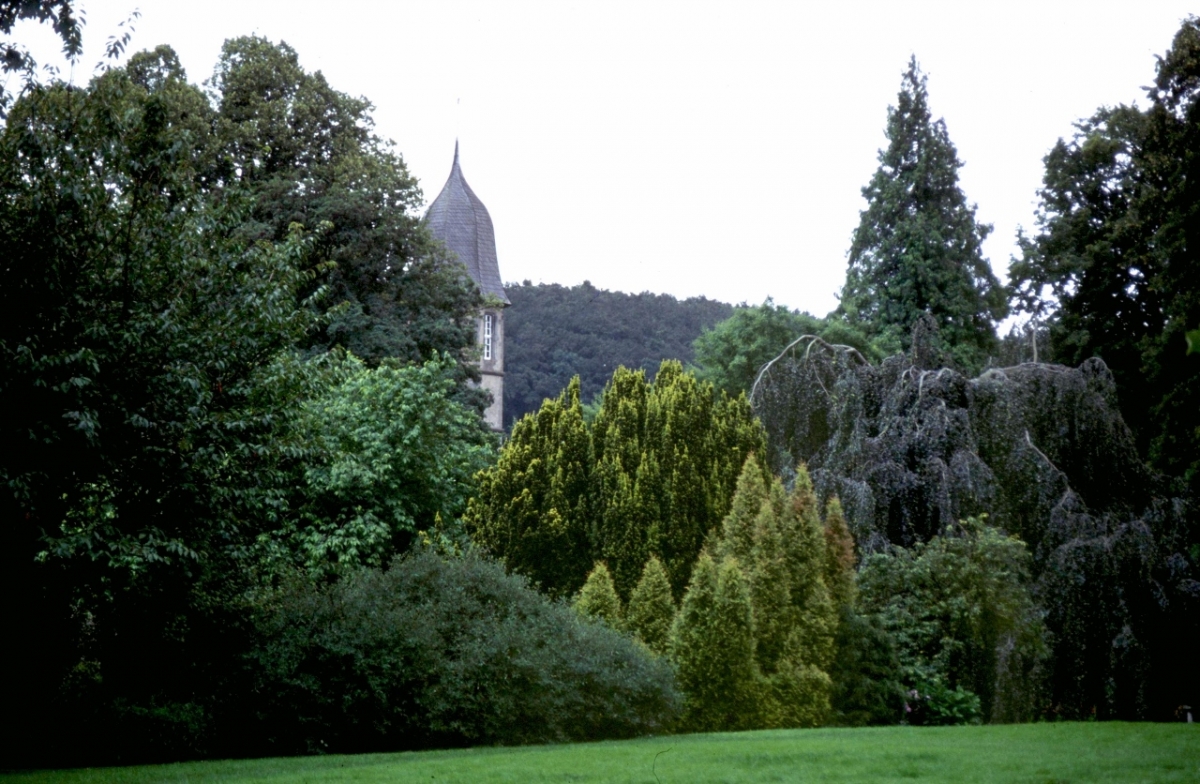 Wendlinghausen water castle, which was built between 1613 and 1616 by Hilmar von Münchhausen, lies in the Lipper Mountains. The unadorned castle is a typical example of the Weser Renaissance. In 1731 the impressive complex was acquired by the von Reden family, the present owners.

The park owes its existence to Ernst von Reden (1806 – 1869), who planted numerous non-native trees and shrubs in an approximately two-hectare area which had previously been a cattle field.

After the first world war, his grandson Otto von Reden (1877 – 1962) commissioned garden inspector Paul Lässig of Magdeburg to redesign the park. He created vistas and planted exotic trees such as the giant weeping beech or the oriental spruces. Of particular note are an almost two-hundred-year-old tulip-tree, a wing nut and a Japanese magnolia. Among the impressive conifers are an approximately 180-year-old Canadian hemlock, several giant western red cedars as well as rare oriental spruces. The trees are labelled with their botanical and German names. In the spring the visitor can enjoy numerous early-flowering plants such as primroses, larkspur, anemones, bluebells (scilla) and daffodils.

Wendlinghausen Castle, which was built between 1613 and 1616 by Hilmar von Münchhausen, lies in the midst of the Lipper Mountains. The von Reden family acquired the unadorned castle in 1731. It is representative of the Weserrenaissance, a period when the economy of the Weser region flourished and during which a large number of castles were built. Ornamented windowed gables and cross dormers (roof dormers) in the roof area are among the characteristic features as is the “Utlucht”, an oriel-like structure rising directly from the ground. Built in a lake on a grid of piles made from oaks, some of which are 400 years old, the castle was originally surrounded by water on four sides. Today, the steep roof is still covered with dark red sandstone tiles from the Solling area. Together with the four stone-walled barns with part-hipped roofs as well as a stone wall which surrounds the grounds, the complete complex is an impressive example of a representative residence of the landed nobility of the Lippe region.

Wendlinghausen was managed for decades in the 17th and 18th centuries by leaseholders and stewards, so that it seems unlikely that a park existed during this period. It was Johann von Reden (1731 – 1791) who first planted trees in large numbers in the “Redenholz” or “Bosquett“, among them primarily oaks, as well as the large common oak at the courtyard gate. The creation of the park is above all thanks to the passion for collection of Ernst von Reden (1806 – 1869). He planted numerous non-native trees and shrubs in the approximately two-hectare complex.

After the first world war, his grandson Otto von Reden (1877 – 1962) commissioned the Royal Prussian Garden Inspector Paul Lässig of Magdeburg to redesign the park. He conceived a network of paths, also regrouping the plantings and creating long vistas. As was typical at the time, he planted exotic trees and shrubs such as the huge weeping beech (Fagus sylvatica pendula) or the group of oriental spruces (Picea orientalis)

In spite of losses due to old age and due to redesign during the 1960s, the solitary trees are still the dominant feature of the park. They include an almost 200-year-old tulip-tree (Liriodendron tulipifera) from America, a wing nut (Pterocarya fraxinifolia) from the Caucasus and a Japanese magnolia (Magnolia kobus). Conifers which are worthy of mention include an approximately 180-year-old Canadian hemlock (Tsuga canadensis), several western red cedars (Thuja plicata) as well as rare oriental spruces (Picea orientalis). Since 2004 the trees and shrubs have been labelled with their botanical and German names as well as the year in which they were planted.

In spring the visitor can enjoy numerous early-flowering plants such as primroses, larkspur, anemones, bluebells (scilla) and daffodils. The arrangement of flowers gives the castle park its exceptional and picturesque character.

Wendlinghausen Castle offers a magnificent backdrop for the spatial creations, which first took place here in 2000 and have changed every year since. The Arcadian-like setting was first populated in the summer of 2000 by oversized bronze women on steel tables in the castle park (Thomas Schütte). These figures, which were prepatinated in colour, seemed sensuously distorted.

Martha Schwartz’s garden ornamentation on plinths in a geometrical lawn pattern, on the other hand, demonstrated the human desire to control and anthropomorphise territories.

George Condo brought music into the garden in the form of highly-polished steel sculptures in honour of jazz greats, which almost appeared to dissolve in the reflections. The park seemed to be reconquered by its original inhabitants in 2004 with the 10-metre high spider sculpture by Louise Bourgeois, yet the fear-inducing bronze sculpture actually represents the artist’s mother.

In 2005 it will be possible to take refuge in Tobias Rehberger’s tree houses.

Particular sights and insights can be gained from the castle park: here one’s eye is caught by the artistic Weser Renaissance castle, there near the lake, nature has regained a piece of the formalised park, and here again a framework of trees offers a view out to the farmed fields and meadows. Nature and art, old and new, tradition and modernity, closeness to the earth and openness to the world enter into mutual harmony: readings and concerts join these counterparts.

Since the Renaissance, nature has ceased to be viewed as wild and hostile. Instead it is imitated, explored and artistically shaped. For many generations of artists it has become a mentor for rhythm and proportions: beauty is regularity, consonance, concordance, harmony. It can be found in nature and as a result provides a model for art, painting, music, literature and architecture. “Nothing remains of us artists yet our fellow humans will speak through our pictures” – this thought about recognising and recognising anew, which the Danish writer Inger Christensen attributes to the Renaissance painter Andrea Mantegna , is reflected in Wendlinghausen in multiple ways. One is reminded of Petrarch with his descriptions of nature, which form an intersection between mediaeval and modern thought.

Goethe, who was a friend of the ancestors of the present castle owners, writes in his Italian Journey: “Educating through objects does not mean gathering knowledge, but letting their existence have an effect on one in order to obtain the greatest sense of what humans have achieved”, thereby showing the greatest respect for the ideals of the Renaissance. Contemporary writers speak of walking through the landscape, of patient listening to and close examination of what surrounds them, of how they learn new things through their writing about nature, the world and people, thereby guiding the reader word by word until he or she is close to the appearances of the world again.

Opening times:
During events and all days from July until September

Admission prices:
Admission free Guided tours (including the Schloss and the estate) during events and on prior agreement

Events for children and young people: During events only.

How to get there by car:

Leave the B66 between Lemgo and Barntrup southward. Schloss Wendlinghausen is another 2,5 km from there.