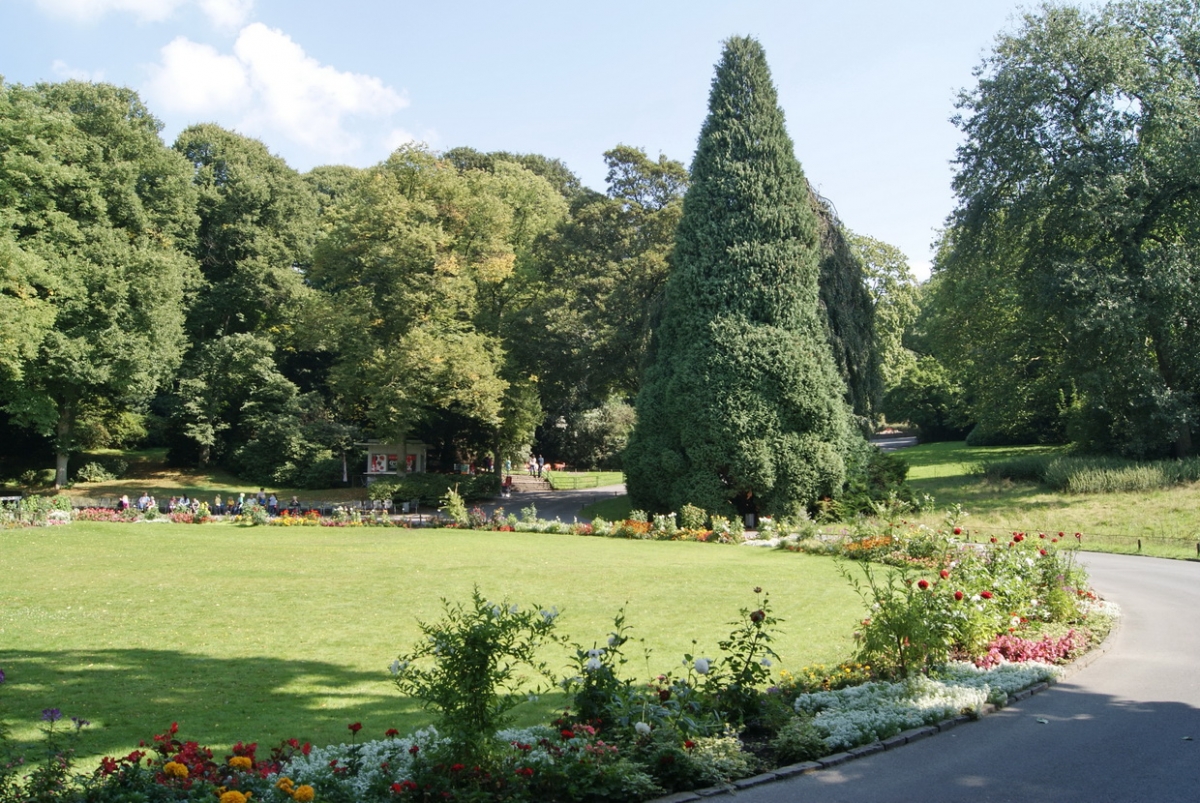 and Green Villa District at the Zoo

The Zoological Garden Landscape Park in Wuppertal forms an overall ensemble dating from the 19th-century Gründerzeit thanks to its surviving structural design by Heinrich Siesmayer, the garden architect from Frankfurt (1817-1900), as well as its valuable stock of trees, expanses of water on different levels, listed buildings and the adjoining villa district at the zoo. This unique combination of garden city, garden design and hilly ground was given protected status in 2004.

Siesmayer used the existing natural conditions to create a park in the style of a romantic landscape garden. Curving paths, ponds fed by the natural streams, constantly changing views of the park and out over the countryside as well as animal enclosures scattered through the grounds have been the characteristic features of Wuppertal Zoological Garden from the past to the present day.

One of the oldest zoos in Germany, Wuppertal Zoological Garden was opened on 8th September 1881 and can be found on the east bank of the Wupper river to the southwest of the town area of Elberfeld.

The beginnings of Wuppertal zoo date back to 1879, when the “Zoologischer Garten” public company was founded. When sufficient funds had been gathered by selling shares, a suitable location was sought.

The choice fell on the area known as “Am Kothen”, between Sonnborn and Elberfeld. The terrain rises gently towards the higher ground of the Königshöhe, where walking trails and viewing points had already been established. Moreover, it was possible to include the natural streams and the existing mountain forest as design elements in the zoo’s layout. These were the reasons behind the public company’s acquisition of the 20-hectare piece of land in 1880.

The zoo was created according to plans drawn up by Heinrich Siesmayer, the garden architect from Frankfurt (1817-1900). Using the existing natural conditions, Siesmayer created a park in the style of a romantic landscape garden. Curving paths, ponds fed by the natural streams, constantly changing views of the park and out over the countryside as well as animal enclosures scattered through the grounds have been the characteristic features of the Wuppertal Zoological Garden from the past to the present day.

In the zoo’s early days, the animal population was very modest in size. A pair of wolves and a bear were the main attractions at the opening. At that time, Wuppertal zoo was primarily park-like in character, and this still gives it its special quality today despite the growth in the number of animals.

The zoo experienced very little damage during the Second World War. As a result of this happy circumstance and also due to the fact that the later extensions and new buildings were integrated sensitively into the landscape, the original design and form of the overall grounds have largely survived. This is true not only of the network of paths, the ponds and the stock of trees but also of the various buildings, which today provide a record of the language of form of the individual building phases. This is evident, e.g. in the neo-classical entrance building and the Expressionist-style ticket office. Other buildings which have survived include the zoo director’s former residence, the old elephant house dating from the 1920s, the monkey house from 1927 and the concert shell from the 1950s.A particularly interesting attraction in terms of zoo history is the “Nordlandpanorama”, which was built between 1909 and 1911. Carl Hagenbeck, the founder of outdoor enclosures without bars, played a role in its creation.

All further developments in the zoo have been made while taking the historical park into consideration. The modern buildings and enclosures thus also fit perfectly into the existing landscape scene. Among these are the new elephant enclosure (1995), the outdoor enclosure for apes, the new enclosures for tigers and lions on the extended grounds (2007), the new penguin enclosure and the extended wolf enclosure (2014).

A Green Villa District at the Zoo
Planning of the villa district at the zoo took place from 1888 onwards and was the work of the “Royal Government Building Officer” Rudolf Hermanns (1853-1909) and his partner Kuno Riemann (1851-1928). Their plan was to develop a residential villa district in a green space at the western edge of Elberfeld. Here the Königshöhe elevation and the zoological garden already provided an attractive nearby area for recreation with good transport links to the city. A “fairy-tale like” creation was to be established here for Elberfeld’s industrialists and business owners – in an area with good-quality air thanks to the prevailing westerly winds. This is also symbolically expressed by the “fairy-tale fountain” in Wotanstrasse for which they acted as sponsors in 1897.

Everything was planned down to the last detail: the district’s layout including two central squares, lines of sight between the station and the zoo buildings, and five streets which opened up the view to the “fairy-tale fountain”. Care was taken that even the architectural design of the villas should not to be left to chance. At least until Rudolf Hermanns’ death, the architects built the villas themselves and sold the completed buildings to interested customers. But many attractive buildings were also created in subsequent years, forming an invitation to visitors to take a stroll through the district and experience architectural history.

The villa district at the zoo has enjoyed protected status as a listed area since 2004. The Zoological Garden is part of this ensemble. 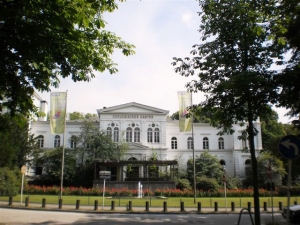